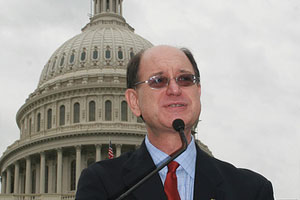 NCRI – A senior member of Foreign Affairs Committee of U.S. Congress has expressed concern over the removal of thousands of concrete T-walls protecting housing trailers in Camp Liberty, Iraq housing some 3,100 member of the People’s Mojahedin Organization of Iran (PMOI/MEK).

Congressman Brad Sherman, Democrat from California said: “It is time for all of those who are concerned with human rights in the world to ask the Iraqi government why concrete structures designed to protect people from blasts were removed in the months prior to when rockets containing explosives were fired into the camp.”

Iraq must act now to protect 3,100 Iranian dissidents languishing in Camp Liberty following the deadly rocket attack on February 9 that left seven dead and more than 100 injured, US Congressman Brad Sherman has demanded.

And Liberty residents must be given concrete anti-blast walls to protect them from further attacks before they are moved out of the camp to safety, Mr Sherman told a meeting in the US Congress.

He said: ” I’m particularly concerned because at the camp they had these concrete T walls, over 17000 of them. They were around the trailers that were designed to protect the residents if, God forbid, there was an explosion because this was not an unpredictable act.|”

Mr Sherman – a co-sponsor of House Resolution 89 which condemns the February 9 rocket attack calls for the residents immediate and safe passage to safety – added: “We know that the Hezbollah brigades and Iranian government affiliated group has claimed responsibility for the attack and warned that others would follow.”

He said the MEK was the organisation ‘most feared and hated’ by the Iranian government, which sponsored Hezbollah brigades to attack unarmed MEK civilians at Camp Liberty, also known as Camp Hurriya.

He said: “And, of course, the terrorists who launched those rockets need to be brought to justice. Camp Hurriya (Camp Liberty) seems to be designed more as a prison camp than as a camp for those who are refugees.

“We have to ensure that the Iraqi government takes meaningful steps to provide better security and better living conditions.

“I look forward to celebrating Nowruz with you next year when we will hopefully be celebrating a new regime in Tehran.”