We are on the side of Iranian Resistance â French Politician

âThe way the People’s Mojahedin Organization of Iran (PMOI ) is dealt with, condemned and blacklisted, does not honor our rule of law.â

Text of speech by Adrien Zeller, president of the council for the French Alsace region in a seminar at the European Parliamentary Association in Strasbourg on April 24, 2008:

âThe way the People’s Mojahedin Organization of Iran is dealt with, condemned and blacklisted, does not honor our rule of law.â

Text of speech by Adrien Zeller, president of the council for the French Alsace region in a seminar at the European Parliamentary Association in Strasbourg on April 24, 2008: 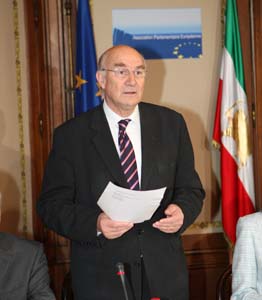 I would like to tell you how proud I am today as an Alsatian to see that several colleagues and former colleagues and MPs from Alsace region are beside Mrs. Rajavi for an important day here in Strasbourg.

Many developments will take place here in Strasbourg which will certainly help Europeans to become more aware of the existence of a strong expectation regarding Iran and its future, with its archaic and dangerous regime.

Due to a series of interests coming across one another, the European Union has not yet found the ways and means to help Iran achieve democracy, as rightly defined by the NCRI [National Council of Resistance of Iran]and represented by aremarkable and exceptional woman.

We are thus on their sides. Together with other members of parliament, former MPs and officials, I would like to speak about support for the Iranian Resistance movement.

We are surprised by the way in which our countries, England, France or European Union, deal with the main Iranian Resistance movement, namely the People’s Mojahedin [PMOI/MEK], that I had the opportunity of meeting with them in my visit to Auvers-sur-Oise.

We think that the way this movement is dealt with, even condemned and blacklisted, do not correspond to the rule of law that we have to support.

So I would like to say clearly that we are here to urge the authorities to support those in the European Parliament and especially in the French National Assembly who are aware of this paradox and the situation that does not necessarily respect our rule of law.

I do not need to tell you about the situation of human rights, and especially women’s rights, in a country like Iran. We are here to assert our values, to encourage all those who hold responsibilities, to take into account the people’s expectation, friends’ expectation and that of all of us.

We need an environment in the Middle East and in Europe to create conditions of a real peace based on rights, on respect for others, on respect for democracy and also based on western values, the same values that exist in Iran and are represented by Mrs. Rajavi more than anyone else. On this day, we express our full solidarity with the Iranian Resistance and affirm our will to see our institutions better respect the rights of the movement.
————————-
NCRI Editor’s note:The People’s Mojahedin Organization of Iran (or Mujahedeen-e-Khalq, MEK) is a member of the National Council of Resistance of Iran

Previous articleA great victory — but at what terrible price?
Next articleIran: More than one quarter of Iranian youths are jobless, Says official