With Iranian New Year in Sight, British MPs Call for Change in Iran 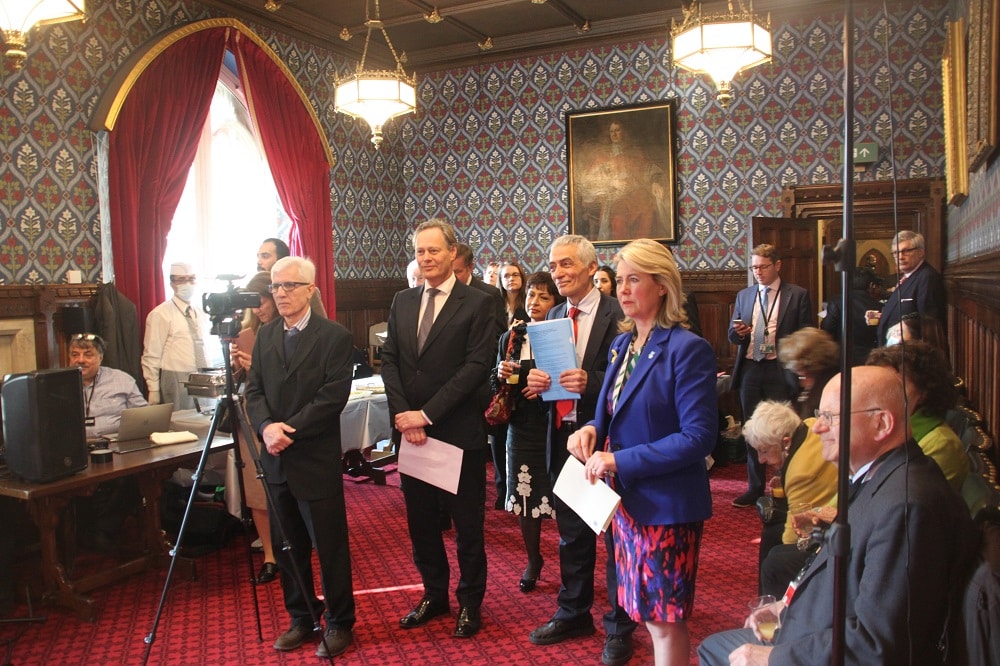 Dozens of members from both Houses of Parliament and members of the Anglo-Iranian community in the UK attended a Persian New Year reception held on the eve of Nowruz in the Jubilee Room in Westminster. The cross-party MPs and Peers expressed their support for the Iranian people, the National Council of Resistance of Iran (NCRI), and the popular protests across the country despite the state crackdown.

Condemning the crackdown on protesters and NCRI supporters in Iran, they said that the regime’s response to widespread demand for freedom and democracy should be regarded as a sign of its weakness challenged by a rising popular movement for change.

In a message to the event, the NCRI President-elect, Mrs. Maryam Rajavi told the British parliamentarians: “The world is facing a critical situation and at the same time the regime is engulfed with crises of survival without any solution. Iran’s ruling dictatorship is now at the weakest point of its rule in the past 43 years. Social discontent is widespread because of poverty, corruption, and repression. Since 2018 alone, eight major nationwide uprisings have shaken Iran. During the November 2019 uprising, the regime brutally killed at least 1,500 people.”

“However, the popular uprisings and the activities of the organized Resistance and the Resistance Units have brought the prospect of the regime’s overthrow much closer than ever. Regime officials, including Khamenei, warn against this prospect and the role of the People’s Mojahedin,” Mrs. Rajavi added, citing the regime’s failure to deter dissent by appointing Ebrahim Raisi as the president who has been notorious for mass executions during his entire career.

Mrs. Rajavi added: “Decisiveness in the face of this regime is an inevitable imperative. Because a lack of firmness sends the message that they will never be held accountable for their criminal acts and that they should continue their disruptive policies. I call on all of you, the elected representatives of the British people, and the supporters of the Iranian Resistance, to urge the British government to lead an initiative in support of the people of Iran and their Resistance to overthrow this regime.”

The co-president of the British Committee for Iran Freedom (BCFIF), Dr. Matthew Offord MP, reaffirmed the cross-party support for NCRI’s call for a decisive policy. “We urge the UK Government to stand with the Iranian people and their resistance movement led by Madam Rajavi. We ask our ministers and government to recognize Madam Rajavi’s 10-point plan for future Iran that encompasses the true democratic aspirations of the Iranian people as the viable alternative to the mullahs’ brutal rule,” he said.

Iran's ruling dictatorship is now at the weakest point of its rule in the past 43 years. Social discontent is widespread because of poverty, corruption and repression. #WeStand4FreeIran #Iran https://t.co/EtUzjfm3KH pic.twitter.com/3sxmg6Jz6d

The cross-party MPs speaking at the event stressed that the regime’s intensified crackdown and an increasing number of executions since Ebrahim Raisi took office as president reveal the importance of an international accountability process to end impunity in Iran.

The BCFIF President, Rt Hon David Jones MP, said: “The regime is more desperate and weaker than ever it has been in its history. And it sees Madam Rajavi’s 10-point democratic platform gaining international support and recognition as the viable democratic alternative to its ruling religious dictatorship, despite Tehran’s billion-dollar defamation and a propaganda campaign.”

Bob Blackman MP, President of the International Committee of Parliamentarians for a Democratic Iran, added, “To end impunity for regime leaders, we must hold them accountable for their human rights violations and call them out on their crimes against humanity. And in this regard, my colleagues and I have tabled the EDM615, with 40 cross-party signatories so far, which calls on the Government to seek a UN Commission of Inquiry into the 1988 massacre; and recognizes 19 July as the day to remember victims of the 1988 massacre.”

The BCFIF co-president, Steve McCabe MP, stressed that the mullahs cannot withstand the growing support for the pro-democracy opposition NCRI and the popular dissent. Their dictatorship is weak and crumbling from its core.”

Rt. Hon. Sir Roger Gale MP concurred and said, “The international community must reject the religious dictatorship in Iran and stand with the people and their Resistance movement NCRI who are making a great personal sacrifice to advance the cause of freedom, human rights, and democracy.  The UK must also act to secure accountability because there is no prosperity in Iran without justice.”

Rt. Hon. John Spellar MP added, “We must also remember that the regime in Iran is complementing its domestic oppression with spreading terrorism and destabilizing the region. This is the two-prong approach by the regime because it can only survive by creating more chaos and killings.”

Previous articleIran News in Brief – March 16, 2022
Next articleIran COVID-19 Crisis: Khamenei Will Reap What He Sowed