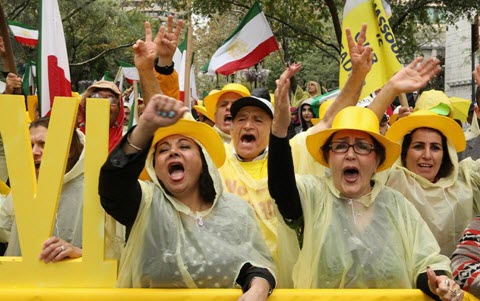 Thousands of Iranians joined by their supporters will gather in New York City to protest Iranian regime president Hassan Rouhani’s presence at the United Nations General Assembly, and call for regime change in Iran.

Association of Iranian Americans in New York (AIAINY), a member of the Organization of Iranian American Communities-US (OIAC), said in a statement that the 3-day program includes a September 20, 2017 rally outside the U.N. headquarters as well as street acts and a photo exhibition to commemorate the anniversary of the 1988 massacre of 30,000 political prisoners in Iran.

The rally will call on U.S. Ambassador Nikki Haley to refer the 1988 massacre dossier to the U.N. Security Council, the statement by the group said.

Protesters will urge the international community to evaluate Rouhani on his deeds, not his deceptive demeanor or words. They will emphasize the ever-escalating discontent in Iran.

According to the regime’s own officials, some10 million Iranians struggle with addiction and around 18 million people live below the poverty line. Yet on December 31, 2015, Rouhani ordered his armed forces, “to quickly and significantly increase their missile capability.”

The statement by the group added: “Parallel to the regime’s ballistic weapons program and terrorism across the Middle East, the number of executions in Iran has skyrocketed during Rouhani’s presidency.”

“In July 2017 alone, at least 100 Iranians were executed. Individuals who served in his previous administration, and those now being picked as ministers, not only perpetrated the current barbarism, but also had a major role in the mass executions of 1988. His choice for Justice Minister for the last 4 years, Mostafa Pour-Mohammadi, was a member of Tehran’s infamous “death commission.” He was replaced this term by Alireza Avaie, who was directly involved in the 1988 massacre of political prisoners in Iran’s Khuzestan Province.”

“Rouhani’s deeds are indeed an affront to modern civilization and highlight the abject failure of Western appeasement policies vis-à-vis Iran. While applauding the growing international awareness of Rouhani’s contempt for democracy and human rights, and his unsavory role in the growing instability in the Middle East, Iranian Americans will emphasize that regime change in Iran is imperative and achievable, not by means of outside military interference, but from Iran’s own people and their organized Resistance, which is fully prepared to facilitate that change.”