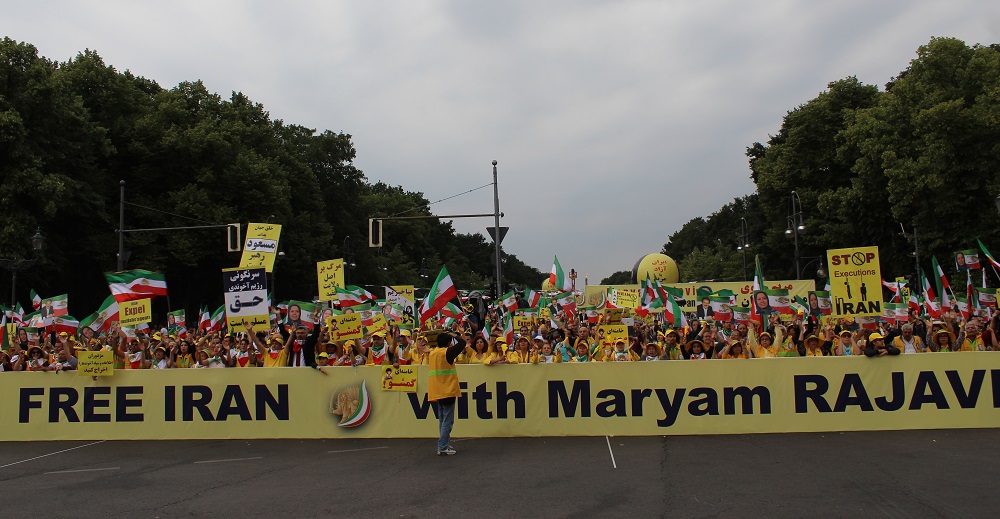 MEK rally in Berlin-Over 15,000 supporters of the National Council of Resistance of Iran (NCRI) demonstrated in Berlin in Solidarity with the Iranian uprisings-July 2019

Written by Mansoureh Galestan on 21 September 2019.

Not content with bombing six oil tankers in the Gulf and the shooting down of an American drone, the Iranian regime's Islamic Revolutionary Guards Corps (IRGC) seized a British-flagged tanker -- the Stena Impero -- in international waters. Now it has mounted a drone and missile attack on Saudi Arabia's Abqaiq oil-processing plant, the world's largest, and the Khurais oilfield, causing huge disruption to Saudi oil exports and a massive spike in global oil prices, writes former European lawmaker Struan Stevenson.

U.S. Secretary of State Mike Pompeo described the attack as "an act of war."

The latest spate of criminal attacks follows a year in which a senior diplomat from the Iranian Embassy in Vienna was charged with handing over explosives to three Iranian agents with instructions to bomb an opposition rally in Paris, Mr. Stevenson wrote on Friday, September 20, 2019, for the United Press International. In December 2018, the ambassador and first secretary from the Iranian Embassy in Albania were expelled from that country on similar terrorist charges.

"In every case, the fundamentalist mullah regime has denied responsibility. They claimed no knowledge of the sabotage of oil tankers in the Gulf, despite IRGC fighters on a fast patrol boat being filmed removing a limpet mine that had failed to explode from the side of one of the tankers. They claimed the Stena Impero had violated international maritime rules as justification for their act of barefaced piracy, which was seen as retaliation for the arrest of an Iranian tanker in Gibraltar for breaching European Union sanctions by attempting to deliver over 2 million barrels of crude oil to Bashar al-Assad in Syria," Mr. Stevenson pointed out.

"The Iranian regime denied that the oil was destined for Syria, but when Gibraltar's highest court ordered the release of the tanker, it was filmed some days later unloading its cargo at the Baniyas refinery in Syria."

The mullahs claimed that the arrest of their Vienna-based diplomat was a 'false flag' effort to damage their regime. Now they have angrily protested their innocence over the drone and missile attacks on Saudi oil installations, despite satellite imagery pinpointing the launch zone in Southern Iran. Iranian Foreign Minister Javad Zarif, himself listed as a terrorist by the U.S. State Department, tweeted that Pompeo, 'having failed at max pressure, is turning to max deceit,' in an apparent bid to mock American attempts at exerting maximum pressure on the Iranian regime, following President Donald Trump's withdrawal from the nuclear deal."

"Zarif is an expert on max deceit. He has lied consistently to cover Iranian involvement in its ongoing catalog of crimes. As cheerleader for a regime that supplies weapons and personnel to prop up Assad's bloody civil war in Syria, the terrorist Hezbollah in Lebanon, the brutal Shi'ia militias in Iraq and Hamas in Palestine, Zarif is an expert on propaganda and duplicity."

"During their time in office, Zarif and his friend, the so-called 'moderate' President Hassan Rouhani, have presided over the execution of more than 3,500 people, including women and children in Iran, where the torturers and executioners are busier than ever, determined to crush all opposition under a tidal wave of fear and oppression."

"The mullahs have even accelerated their wave of hostage-taking, extending the arrest of dual Iranian-foreign nationals like Nazanin Zaghari-Ratcliffe, to foreign citizens. Zaghari-Ratcliffe, the young British-Iranian mother, has been held in appalling conditions in Tehran's notorious Evin prison for more than three years on trumped-up espionage charges. She has now been joined by Kylie Moore-Gilbert, a young Australian academic, who was arrested in October 2018 by the IRGC and by Australian travel bloggers Mark Firkin and Jolie King, who were arrested in July."

It is believed that at least 30 dual and foreign nationals are imprisoned in Iran, Mr. Stevenson added. Their arrests are always followed by a pattern of prolonged solitary confinement and interrogation, against a background of denial of due process, denial of consular access or visits from U.N. or humanitarian organizations, secretive trials in which the detainee is given limited access to counsel and long prison sentences based on vague or unspecified "national security" and "espionage" charges.

"The belligerent and hostile behavior of the Iranian regime proves that attempts at negotiation or appeasement are pointless. Claims that the West is faced only with the choice between war and appeasement is a false dichotomy. Making concessions to this evil regime simply emboldens them and confirms the mullah's view that the West is weak."

"We do not seek war, but we do seek courage and resilience, not weakness. We must show our support for the Iranian people and their democratic resistance movement, the Mojahedin e-Khalq/People's Mojahedin of Iran (MEK/PMOI). Their courageous determination to remove this evil regime from power and replace it with a secular democracy is the only way forward," Mr. Stevenson summarized.

Struan Stevenson is the coordinator of the Campaign for Iran Change. He was a member of the European Parliament representing Scotland (1999-2014), president of the Parliament's Delegation for Relations with Iraq (2009-14) and chairman of the Friends of a Free Iran Intergroup (2004-14). He is an international lecturer on the Middle East and president of the European Iraqi Freedom Association.