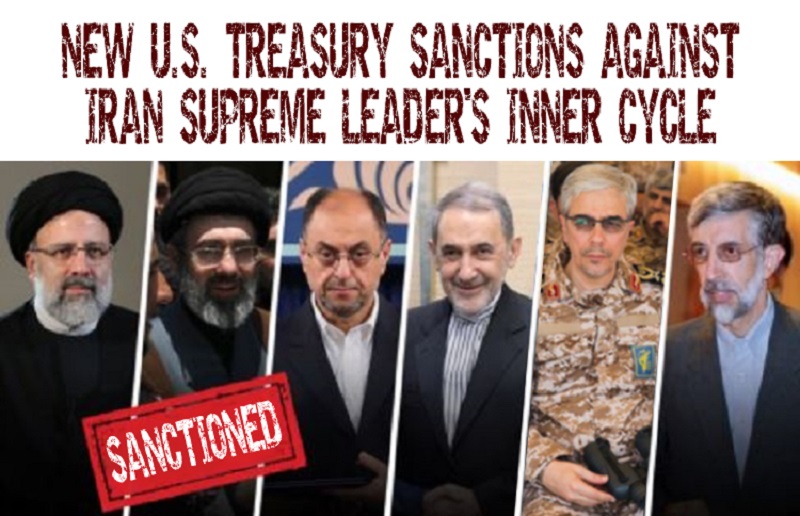 On November 4, 2019, the U.S. Department of the Treasury sanctioned the Iranian regime’s Armed Forces General Staff and nine individuals including Ebrahim Raisi, who was previously a member of the "death commissions" that were responsible for the 1988 massacre of thousands of political prisoners.

“Previously, as deputy prosecutor general of Tehran, Raisi participated in a so-called ‘death commission' that ordered the extrajudicial executions of thousands of political prisoners in 1988,” a Treasury Department press release reads.

“Specifically, our actions today target, first and foremost, Ebrahim Raisi.  He is the head of Iran’s judiciary and he was appointed by the supreme leader in March of 2019.  Prior to this appointment, Raisi was involved in the regime’s brutal crackdown on the Green Revolution and the protests that followed the fraudulent 2009 elections.  When he was deputy prosecutor general of Tehran, Raisi participated in the so-called death commission that ordered the extrajudicial killings of thousands – I repeat, thousands – of political prisoners in 1988.  Raisi’s oversight of the judiciary in Iran perpetuates the country’s record of barbaric human rights abuses,” a senior Administration official said in the State Department special briefing via telephone.

In 1988, Ruhollah Khomeini, then-supreme leader of the Iranian regime, issued a fatwa (religious decree) to purge Iran of political prisoners. In the span of a few months, Iranian authorities executed 30,000 political prisoners, mostly members, and supporters of the People’s Mojahedin Organization of Iran (PMOI/MEK). After 31 years, the 1988 massacre remains an unpunished crime against humanity. Many current regime officials, including Judiciary Chief Ebrahim Raisi and Justice Minister Alireza Avaei, were directly involved in the sentencing and execution of political prisoners.

Iran's 1988 massacre of 30,000 political prisoners is an "ongoing crime against humanity". 31 years on, the perpetrators are in government & families of victims continue to be tormented. It's high time for @UNHumanRights to investigate the #1988Massacre.https://t.co/kewzyevVYM pic.twitter.com/wrlDs8gOZM

In December 2018, Amnesty International published a 201-page report, “Blood-soaked secrets: Why Iran’s 1988 prison massacres are ongoing crimes against humanity.” Amnesty International called on the UN to launch an independent investigation to help bring those responsible for these abhorrent crimes to justice. It wrote, “In late July 1988, thousands of political dissidents held in prisons across Iran were forcibly disappeared suddenly. They were mostly young men and women, some just teenagers, unjustly imprisoned because of their political opinions and non-violent political activities…The authorities have treated the killings as state secrets..."

Thanks to the initiative of Mrs. Maryam Rajavi, the president-elect of the National Council of Resistance of Iran (NCRI), a strong movement titled, “Call for Justice,” was launched three years age. This movement enjoys international support by prominent lawyers, human rights experts, and former officials who help the Iranian opposition and the PMOI/MEK to bring the perpetrators of the 1988 massacre to justice.

On the World Day against the Death Penalty, MEK supporters held ceremonies in many European countries including the United Kingdom, the Netherlands and France and commemorated victims of the massacre.

A conference and exhibition were held in the City Hall of Paris’ 1st District on August 30, marking the 31st anniversary of the massacre.

“Granting immunity to the perpetrators of the 1988 massacre must not continue,” said Mrs. Rajavi in a message to the conference in Paris.

The mullahs’ nuclear & missile programs, warmongering & terrorism are consequences of the appeasement policy which must no longer continue. Just as giving immunity to the perpetrators of the #1988Massacre must also be stopped. #Iranhttps://t.co/FnzTnVG2Ro pic.twitter.com/WPWhQWxTn7

She called on the international community to end three decades of impunity for the clerical regime’s leaders in being held accountable for their crimes and refer Iran's human rights violations dossier, particularly the massacre in 1988, to the UN Security Council.