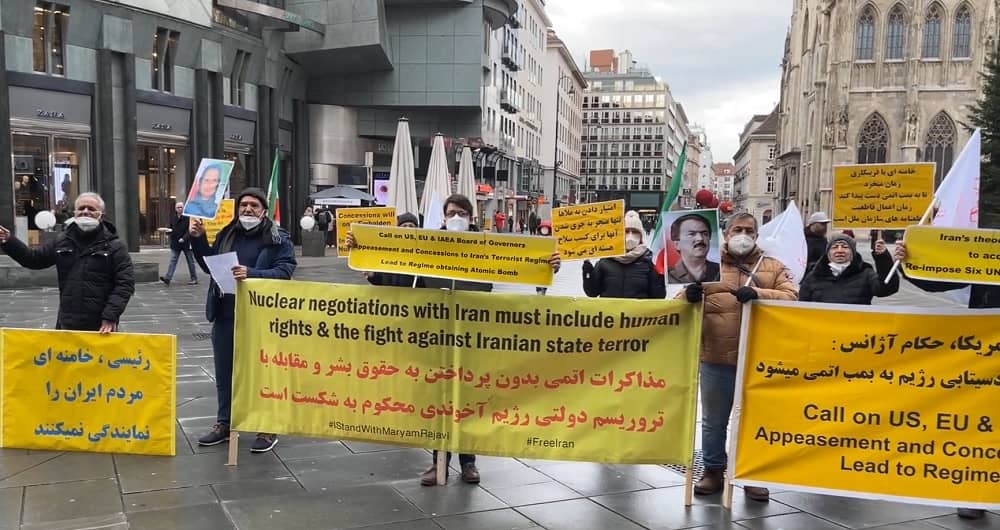 Over the past several years, Iran’s worsening economic crisis has contributed to a great deal of public unrest, including two nationwide uprisings that featured explicit calls for regime change. As nuclear negotiations in Vienna resumed this week, this unrest persisted across a number of regions, highlighting the fact that the Iranian people hold the current government responsible for their hardships and have few expectations that Tehran’s efforts to remove economic sanctions will actually result in better socio-economic conditions.

In December 2017, a protest was organized in the city of Mashhad to voice grievances about inflation, unemployment, and associated government corruption. This unexpectedly sparked the first of the uprisings, which spread to well over 100 cities and towns the following month. At that time, the regime Supreme Leader Ali Khamenei blamed the country’s leading pro-democracy opposition group, the People’s Mojahedin Organization of Iran(PMOI/MEK), for helping to popularize slogans like “death to the dictator” while actively organizing multiple simultaneous demonstrations.

In November 2019, the MEK was similarly held responsible for the resurgent uprising, which encompassed nearly 200 localities almost immediately. The continuity of those uprisings, the boldness of their messaging, and the MEK’s role all contributed to the regime’s decision to crack down much more fiercely on the second set of protests. Security forces and the regime’s hardline paramilitary, the Islamic Revolutionary Guard Corps, opened fire on crowds almost immediately, killing approximately 1,500 people in a matter of only days.

This was widely recognized as the bloodiest crackdown on dissent in many years, and was made worse by the fact that thousands of other activists were arrested during and immediately after the uprising, many of whom were subjected to months of torture in notorious Iranian prison facilities. The severity of Tehran’s response underscores the depth of its fear of organized dissent and especially of the MEK. That fear previously drove Iranian officials to massacre 30,000 political prisoners in the summer of 1988.

The regime’s authorities willing to push the death toll once again from individual crackdowns into the thousands, it stands to reason that the regime recognizes itself as being especially vulnerable to an organized opposition today. Considering that that opposition has seemingly been fueled by the economic crisis, it stands to reason that resolving that crisis would be a top priority for the regime’s leadership.

However, the persistent global impasse over Iran’s nuclear program suggests that this is not the case. By steadfastly refusing to dismantle that program or even halt the accelerationism that has been ongoing since the 2015 nuclear deal went on life support three years ago, Tehran has demonstrated commitment to wasting Iran’s resources on force projection and foreign antagonism, when it could be using those same resources to address any number of the issues that have become a driving force behind popular protests in recent weeks and months.

Last week, farmers in Isfahan gathered in the dry riverbed of Zayandeh Rud to demand the opening of an upriver dam. Far from acceding to that reasonable request or even responding publicly to it, regime authorities violently attacked and dispersed the protesters, only to find that they returned the following day and received support both in the streets and on social media from a much broader activist population.
The recent clashes follow much the same pattern as the 2018 and 2019 uprisings, not to mention many of the surrounding instances of smaller-scale unrest. This goes to show that the regime is leaning very heavily upon violent repression to silence the public’s grievances, and that it has no plan to address those grievances in a substantive manner. At the same time, it shows that violent repression is not proving as effective as Tehran anticipated – a fact that has no doubt left the mullahs eager to find other ways of asserting their strength.

The nuclear negotiations provide the regime with a perfect outlet for those ambitions, as they focus attention on Tehran’s potential acquisition of the ultimate weapon while also allowing Iranian authorities to boast about standing toe-to-toe with their Western adversaries while demanding concessions that would enrich the regime and expand its capacity for projecting strength and cracking down on dissent.

Of course, the negotiations are only able to serve this function because the Western adversaries in question have not seriously pushed back against Tehran’s defiant behavior. Even before negotiations opened in Vienna earlier this year, the Iranians made it clear that they would only take part if representatives of the United States were kept separate. Then, in June, it was Iran that halted the negotiations while they were still in progress, citing Iran’s presidential election as a reason why the entire process would need to be reevaluated.

As soon as the Vienna talks resumed on Monday, Tehran began repeating its demand for all US sanctions to be lifted at once, before any other steps are taken toward reestablishing the 2015 nuclear deal. This is, of course, a non-starter for Western participants in those talks, especially considering that Iranian regime has made grand investments into advancing its nuclear program since the deal began to fracture. It is now enriching some uranium up to 60 percent fissile purity, and has produced material that is vital for a nuclear warhead but has no civilian function.

In so doing, Iranian regime has denied comparable investments to a beleaguered population and has actually made it distinctly less likely that the country will ultimately receive sanctions relief. As with Iran’s domestic affairs, the main objective here is clearly to project an image of strength, but the main outcome is more likely to be that Tehran grows more vulnerable to coordinated opposition by adversaries both at home and abroad.