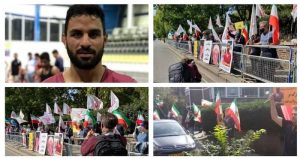 Thousands of Iranians worldwide and several governments, international organizations, and athletes from across the globe had joined the call to save Navid’s life.

Despite this global campaign against the inhuman death sentence against Navid Afkari, and despite his own statement that the confessions obtained from him were under torture, the Iranian regime refused to back down from the execution.

Navid was born in Shiraz and was executed in his hometown. Shiraz was one of the cities that revolted against the Iranian regime in November 2019 and many young people were killed by the regime in this city. The Iranian regime executed the wrestling champion Navid Afkari, fearing that the uprisings would resume. Navid was an example of dissatisfied youth in Iran, and his execution increases more anger of the Iranian youth inside Iran.

Mrs. Maryam Rajavi, the president-elect of the National Council of Resistance of Iran (NCRI), said in a statement: “The mullahs’ criminal regime sent Navid Afkari to the gallows. But they will soon receive their response from Iran’s people and brave youth in their blazing protests and uprisings to topple the regime.

Iran’s courageous youth will rise in solidarity with the heroic people of Fars Province and in protest of the undue execution of Navid Afkari.

Iran mourns Navid and shares in the grief of Afkari family as the world is shocked by Khamenei and the clerical regime’s barbarism.

The religious fascism ruling Iran cannot survive a day without executions, torture, and domestic suppression. By spilling the blood of young people like Navid Afkari, the mullahs are seeking to maintain their hold on power in the face of Iran protests.

The execution of Navid Afkari, however, will only add fuel to the flames of the Iranian people’s uprising and will send the mullahs’ regime to the dustbin of history.”

The mullahs’ criminal regime hanged #NavidAfkari this morning. The people of #Iran and its brave youth will not remain silent against the cowardly execution of this courageous son of #Shiraz. They will rise in solidarity with the heroic people of Fars.

The Iranian dissidents and the supporters of the People’s Mojahedin Organization of Iran (PMOI / MEK) and the National Council of Resistance of Iran (NCRI) have staged protests today in various countries to condemn the execution of Navid Afkari.

The following are some reports from these protests:

Iranians, supporters of PMOI-MEK & the NCRI in Europe protest the execution of Navid Afkari

Paris, France: Iranians, supporters of the MEK and the NCRI staged a rally in Paris to protest the execution of Navid Afkari.

#Iranians, supporters of the People’s Mojahedin Organization of Iran (PMOI-#MEK) and the NCRI staged a rally in Paris to protest the execution of #NavidAfkari #NoImpunity4Mullahs pic.twitter.com/fNvEM7UqvU

London, UK: Supporters of the Iranian resistance protest against the brutal execution of the young champion Navid Afkari with chants of “Down with Khamenei” and “Down with Rouhani”.

#Iranians, the supporters of the National Council of Resistance of #Iran and #MEK staged a rally, and called on the UK gov, to strongly condemn the brutal hanging of #NavidAfkari by the mullahs' regime.#NoImpunity4Mullahs pic.twitter.com/Nak66rYHnE

The Hague, The Netherlands: Iranians, supporters of the National Council of Resistance of Iran (NCRI) and the MEK in Netherland, stage a protest rally in front of the embassy of the criminal and bloodthirsty mullahs’ regime in The Hague against the brutal execution of the wrestling champion Navid Afkari. This regime is doomed to collapse.

🔻Happening Now
This is taking place in the #Netherlands
Iranians demand justice and end to execution of prisoners, protesters and youth#قیام_تنها_جوابه https://t.co/FJSf2BHPbl

Brussels, Belgium: Iranian community supporters of the MEK/ NCRI make an Urgent Action in Brussels in front of Mullahs’ embassy.

#Iranians, the supporters of the National Council of Resistance of Iran and #MEK staged a rally in Oslo and called on the Norwegian gov. to strongly condemn the brutal hanging of #NavidAfkari by the mullahs' regime#NoImpunity4Mullahs pic.twitter.com/cttSFF5WNK

Sweden: Outside the Swedish Parliament after hearing about the execution of Iranian wrestler Navid Afkari.

#Iranians, the supporters of the National Council of Resistance of Iran, and #MEK staged a rally in front of the Swedish Parliament and called on the Swedish gov. to strongly condemn the brutal hanging of #NavidAfkari by the mullahs' regime. #NoImpunity4Mullahs pic.twitter.com/lNFrs2MGdV

The youth inside Iran and the MEK Resistance Units sent messages condemning the execution of Navid Afkari and said: “We will not forget, and we will not forgive!”