The People’s Mojahedin Organization of Iran (PMOI) announced this afternoon, April 13, 2020, that Coronavirus has taken the lives of more than 27,000 in 267 cities across Iran.

The Iranian regime dismissed two health officials for making comments that exposed the regime’s cover-up of the COVID-19 epidemic in Iran.

April 12 – Tehran, Iran: More reports of people collapsing due to coronavirus as regime officials order millions of people back to work despite ongoing pandemic

April 12 – Tehran, #Iran
More reports of people collapsing due to coronavirus as regime officials order millions of people back to work despite ongoing pandemic.#COVID19 pic.twitter.com/qanCCDTWZD

Stay-at-home lockdowns in response to the coronavirus crisis have led to a dramatic rise in domestic violence against women around the world so much that the UN calls it, “the shadow pandemic.” In Iran, however, lack of virtually any form of government support for low-income and impoverished families as well as the absence of any authority to attend to the victims of domestic violence have accentuated the impact of the shadow pandemic.

#Iran: #Childabuse and #domesticviolence against women had been on a steep rise since the outbreak of the #COVID19 pandemic in Iran. https://t.co/HHwApHFFSB

Floods in northeast Iran devastates the lives of many villagers

Floodwaters have engulfed many parts of Iran during the past few days. Reports indicate 29 cities of 16 provinces are reporting floods and rising water levels. This includes Isfahan the provinces of Isfahan, Tehran, Alborz, South and North Khorasan, Semnan, Qom, Qazvin, Kerman, Kermanshah, Golestan, Gilan, Lorestan, and Yazd. Recent rains are causing water levels to rise at a flood dam located west of the city of Sabzevar, Razavi Khorasan Province in northeast Iran. Floodwaters are now entering parts of the city, locals say.

Tehran, Iran: Bus drivers and bus owners gathered amid the COVID-19 epidemic to demand their rights in Tehran

Protester: – Haven’t received wages for 2months and have no source of income – Gov. tell us to stay home W/out providing livelihood – We want our rights!

Tehran, #Iran
Bus drivers and bus owners gathered amid the #COVID19 epidemic to demand their rights in Tehran.
Protester:
– Haven't received wages for 2months and have no source of income
– Gov. tell us to stay home W/out providing livelihood
– We want our rights! pic.twitter.com/B2w6mRB6zX

“The fatality figures that we’re aware of in Tehran don’t agree AT ALL with the officially announced figures”.

Member of Tehran's City Council says #Iran's regime is covering up Tehran's #COVID19 death toll.
"The fatality figures that we're aware of in Tehran don't agree AT ALL with the officially announced figures". pic.twitter.com/Qhhz20aL8v

PMOI/MEK network inside Iran herald the victory of the Iranian people against the dictatorship in Iran boosting morale during the COVID-19 outbreak in Iran.
They install posters of Iranian Resistance leader Massoud Rajavi and the NCRI President Maryam Rajavi reading:

While the Iranian regime continues funding terrorism in the region, most of the Iranian people have nothing to eat and must leave their homes to make $6 a day for their families. This is what Ali Khamenei and Hassan Rouhani have imposed to the people: Risking to contract coronavirus just for $6!!!
This is just one reason the Iranian people want the overthrow of mullahs.

In March 2020, the Iranian regime’s state-run TV channel, Ofogh, aired a program named “Javanmard,” in which the head of the Mostazafan Foundation (one of the richest foundations in Iran under Ali Khamenei) narrated his memories from Qassem Soleimani. Parviz Fattah said that Qassem Soleimani had asked him to pay the paycheck of regime’s proxies in Syria, the Fatemiyoun terror group. Parviz Fattah faced much criticism later from regime’s factions for revealing the regime’s secret issues.
This fact proves how the entire regime is working to fund terrorism.

The People’s Mojahedin Organization of Iran (PMOI / MEK) announced on Sunday, April 12, 2020, that the coronavirus death toll has exceeded 26,200 in 266 cities in Iran.

The coronavirus entered Iran from China at the end of January 2020 and spread across Iran due to the Iranian regime’s inaction, lying, and cover-up. It has so far claimed the lives of over 26200 people. The mullahs’ regime, particularly the huge financials foundations affiliated with the regime’s supreme leader Ali Khamenei, despite having financial resources, have been no help to people and aimed to use the epidemic as an opportunity, and as a lever of pressure to lift international sanctions.

Iran: Confidential Instructions by the Central Monitoring and Command of the State Security to Suppress Any Protests, Rebellions in Prisons 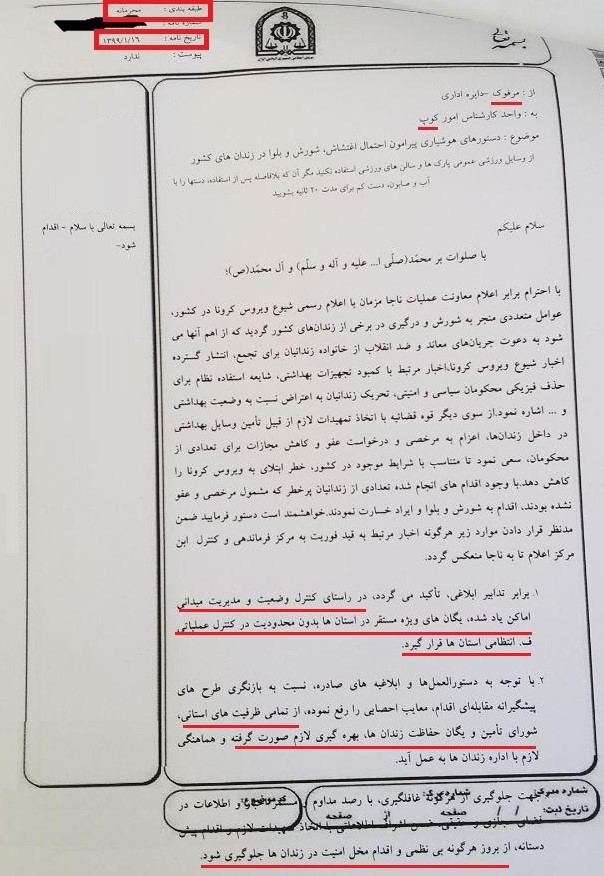 The Islamic Republic of Iran’s Security Forces (SSF).
Classification: Confidential
Date: April 4, 2020
From: The Central Command and Monitoring
To: Specialized unit of the police stations
Subject: Instructions for vigilance on the possibility of rebellion and riots in the country’s prisons.

Despite the Coronavirus pandemic, the inhuman clerical regime is refusing to release prisoners, especially political prisoners.
Many prisoners in various prisons in the country have contracted Coronavirus and some have died.
The NCRI President Maryam Rajavi warned of crimes against humanity being perpetrated in the regime’s prisons.
Maryam Rajavi urged the UNSG, the UNSC, the UNHRC, and the OHCHR as well as the EU to take immediate action to save the lives of the prisoners.
She called for the release of all prisoners, especially political prisoners.

Monday, April 13, 2020, marks the 151st day since the beginning of the nationwide Iran protests.