Some News of the protests in Iran’s various cities:

July 15 – Tehran, Iran: Retirees rallying outside a branch of the regime’s Social Security Organization to seek answers to their outstanding demands

July 15 – Tehran, #Iran
Retirees rallying outside a branch of the regime’s Social Security Organization to seek answers to their outstanding demands.#IranProtestspic.twitter.com/sUzJkEfI0D

The National Council of Resistance of Iran will hold its annual “Free Iran Global Summit” on 17 July. Numerous religious and political leaders, dignitaries, and human rights organizations from both sides of the Atlantic have been expressing their solidarity with the NCRI and MEK virtual conference.

The Iranian regime executed two Kurdish political prisoners on July 14 and intends to execute three young men detained during the nationwide Iran protests in November. On Wednesday, the mullahs’ regime executed another man for simply drinking alcohol. Despite the ongoing condemnation of its human rights violations, the regime has increased its oppressive measures. The question is why?

The hashtag #اعدام_نکنید (stop execution) on social media has become top trending across the world, with people calling for the immediate release of three detained protesters.  Political prisoners Amir Hossein Moradi, 26, Saeed Tamjidi, 28, and Mohammad Rajabi, 26, were sentenced to death for participating in nationwide Iran protests in November. They were arrested, tortured, and forced by the regime to make televised confessions.

On the eve of the Free Iran Global Summit, 120 cross-party Members of Parliament from the United Kingdom issued a statement condemning the executions carried out by the mullahs’ regime. They call for the perpetrators of the 1988 massacre of Iranian political prisoners to be tried. They are also alarmed by recent terrorist plots by the Iranian regime against members of the opposition People’s Mojahedin Organization of Iran (PMOI or MEK) in Europe and the US, which led to the arrest of an Iranian diplomat, Assadollah Assadi, and three other terrorists, who are currently in jail in Belgium.

The United States has now been pursuing a strategy of maximum pressure on Iran’s regime for more than two years. When first outlining it in 2018, the U.S. Secretary of State Mike Pompeo listed a dozen areas of policy in which Iran’s regime would be expected to fundamentally change its behavior. But persons with a deep understanding of Iranian affairs recognize that such fundamental change cannot take place, much less persist over the long term, as long as the current regime remains in power.

On Wednesday, July 15, 2020, the trial of Assadollah Assadi, a diplomat terrorist of the clerical regime who commanded the bombing of a large Iranian gathering in Villepinte, Paris, on June 30, 2018, will begin in Belgium. This is the first time a diplomat in Europe has been tried for direct involvement in terrorism. After two years, the Belgian judiciary completed the investigation into the terrorist plot and handed over the case of Assadi and three of his accomplices to the court.

The Iranian regime’s extensive two-year efforts to help its arrested diplomat in Belgium have so far proven futile, and the first public trial for Assadi will soon be convened. #Iran #ExpelIranDiplomatTerrorists pic.twitter.com/Us5O1adofF

The Iranian Resistance Units, a network of activists of the People’s Mojahedin Organization of Iran (PMOI/MEK) across Iran, have been organizing various activities that are louder calls for regime change. The Resistance Units bravely took to graffiti in public places
announcing their support for the annual gathering of the Iranian Resistance the “Free Iran Global Summit: Iran Rising Up for Freedom” with the slogans: “Down with the principle of the Supreme Leader’s rule,” “Democracy and freedom with Maryam Rajavi, down with Khamenei, hail to Rajavi” and “Maryam Iran, Iran Maryam.” 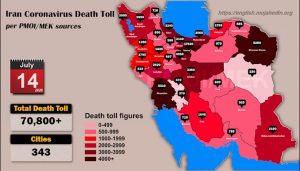 In an unprecedented move, regime’s Health Ministry declared 25 provinces on red or alert

Maryam Rajavi strongly condemned the inhuman executions of Kurdish prisoners and called on the international community to take effective action against the daily killings of Khamenei and his executioners in Iran.

I strongly condemn the executions of two Kurdish political prisoners in the Prison of Urmia, and urge the international community to take effective measures against daily executions in #Iran by Khamenei and his executioners.

In a videoconference on Sunday, July 12, the Iranian regime’s Supreme Leader Ali Khamenei warned the new hand-picked members of the Majlis about the looming the social crisis the regime is facing.

Khamenei warned that internal conflicts can lead to the danger of a new uprisings and said, “The atmosphere of conflict at the top of the establishment is harmful and upsetting for the public opinion.” Khamenei added that “despite of differences of opinions, we must stand hand in hand against the enemy and speak common words.”

Khamenei meant to put a lid on the rivalries between different regime factions lest his entire regime be swept by its real nemesis, the oppressed people of Iran, and their organized resistance movement. 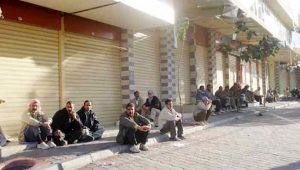 “The extreme poverty index in Iran has increased by 26 percent during the past year alone,” according to a piece published in the state-run Arman daily on Monday, July 13. “This report forecasts unpleasant developments in the future that are beginning to take shape in the depth of our society. During the past year the people’s economic difficulties have increased extensively… the pressures imposed through our monetary and financial policies, and economic mismanagement have all resulted in lesser and lesser people being able to experience any leisure and recreation.”

Wednesday, July 15, 2020, marks the 242nd day since the beginning of the nationwide Iran protests.