Iran continues to set new records for single-day death totals from the novel coronavirus outbreak. The regime’s Health Ministry while announcing the regime’s engineered statistics, acknowledged on Tuesday that 200 people had died over the previous 24 hours. This the highest death toll announced by the regime. Meanwhile, the Iranian Resistance announced on Tuesday that over 66,900 people have lost their lives because of the COVID-19 pandemic.

The latest monthly report by the Women’s Committee of the National Council of Resistance of Iran (NCRI) confirms the misogynous mullahs’ regime’s ongoing violations of Iranian women’s rights. According to this report, the regime has increased its pressure on female political prisoners amid the coronavirus outbreak.

As the factional feuding escalates within the regime, several parliament deputies called for questioning Hassan Rouhani, and even called for his impeachment,  during Javad Zarif‘s appearance at the parliament, Seyed Naser Mousavi Largani, member of the parliament presidium, told the IRGC affiliated news agency, Fars on Saturday, July 5, “The motion to question Rouhani has been signed by 200 deputies so far, and we expect to have more signatures.”

Strength and resilience, message of Atena Daemi from inside prison

Atena Daemi: Every new sentence affirms that I am free; I will stand to the end

Female political Prisoner Atena Daemi who was due to be released on July 4, 2020, after serving her five years in jail, has been sentenced to another five years and 74 lashes.

While Atena Daemi was serving her sentence in prison, the Intelligence Department of the Revolutionary Guard Corps (IRGC) filed two new cases against her.

In a previous case in July 2019, she had been sentenced to three years and seven months in prison, and recently, on July 4, she was sentenced to another 2 years and 74 lashes.

After hearing of her new sentence, this resilient political prisoner who has served five years in Evin and Qarchak prisons wrote, “I should have been released today after almost five years behind bars, but everyone knows that as long as the Islamic Republic exists, Iran is a prison everywhere.”

Explosion in south of Tehran leaves five dead and wounded

Following a series of explosions and fires across Iran, a massive explosion rocked the industrial town of Baghershahr located south of Tehran in the early morning hours of Tuesday, July 7. This enormous blast left two people killed and three injured. The mullahs’ regime is saying oxygen capsules exploding are the cause of the massive incident.

IRNA, the regime’s official news agency, wired a report citing the mayor of Kahrizak, a town in southern Tehran confirming the casualty count of this explosion. “Negligence by employees of a workshop involved with filling oxygen capsules led top an explosion at 3:20 am local time Tuesday morning, resulting in two deaths and three injuries,” the Kahrizak mayor said. “The oxygen capsule explosion was so severe that walls of the Saipa Press factory near this workshop were even damaged,” he added. 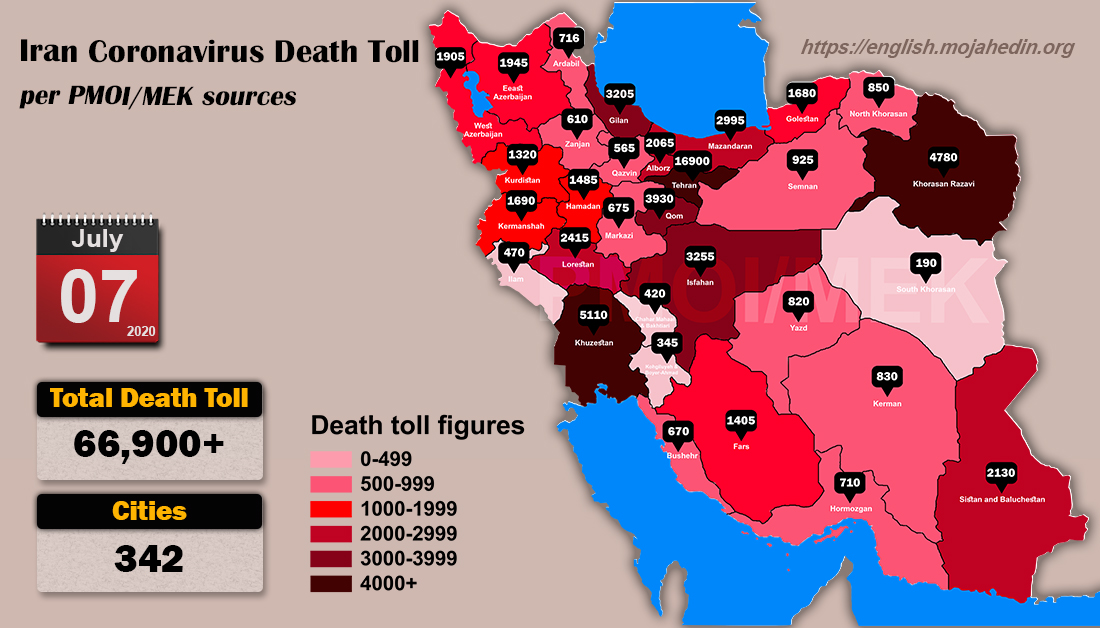 Wednesday, July 8, 2020, marks the 235th day since the beginning of the nationwide Iran protests.

THE CONTENT OF THIS PAGE WILL BE UPDATED WITH THE LATEST NEWS UPDATE: 10:00 AM CEST Iran: The Staggering Coronavirus Fatalities in 373 Cities Surpassed 86,200 The...
Read more
News

THE CONTENT OF THIS PAGE WILL BE UPDATED WITH THE LATEST NEWS UPDATE: 22:00 PM CEST COVID-19 Crisis in Iran: Officials Acknowledge Regime’s Intentional Cover-Up to...
Read more
Latest News in Brief

THE CONTENT OF THIS PAGE WILL BE UPDATED WITH THE LATEST NEWS UPDATE: 10:30 AM CEST Iran: Coronavirus Death Toll in 373 Cities Surpassed 84,900 The People’s Mojahedin...
Read more
Search