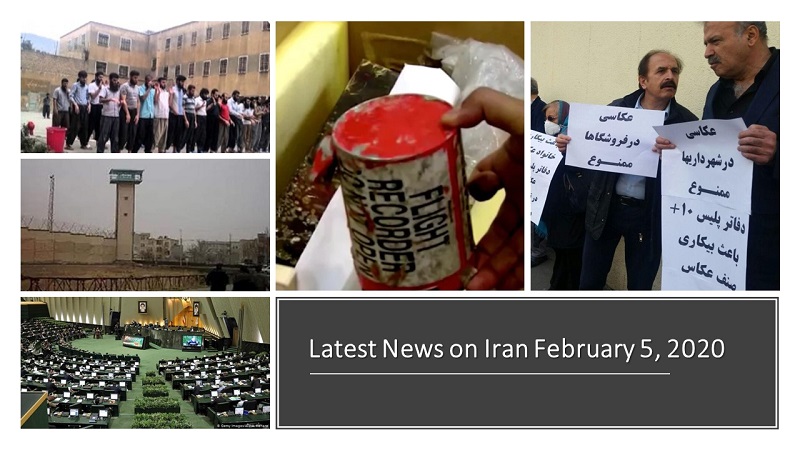 MEK network reported that on February 4, 2020, for the second consecutive day, some unemployed youth held a protest gathering before the Gas Company in the city of Qale-raissi in the Eastern Province of Kohgiluyeh and Boyer-Ahmad.

Bloomberg in an article on Tuesday, February 4, 2020, titled “Corruption, Not Trump, Will Drive Iranian Protest Vote”, underlined the end of the “moderation” game by various rifts within the regime.

Bloomberg wrote: “Rouhani is not really moderate in any rational understanding of the term. He has always been part of the security-clerical complex that has run Iran since the 1989 death of the Islamic Republic’s founder, Khomeini. He and his coterie are best characterized as the least hardline of the hardliners.”

The United Nations agency for civilian aviation is sending a letter to Iran after Canada asked it to press Iranian investigators into swiftly analyzing the contents of Flight PS752’s black boxes — or turn the flight recorders over to a country that can.

Canadian Transport Minister, Marc Garneau, told reporters that he met with the president of the International Civil Aviation Organization (ICAO) to talk about the delay in completing the black-box analysis.

“We would like the black boxes to be analyzed as soon as possible,” said Garneau outside the House of Commons. “It’s been almost four weeks.” He said.

Trudeau said it’s “extremely worrying” that Iran is trying to analyze the flight recorders itself when it lacks the technical resources to do so.

Previous articleKhamenei Poised to Purge Rival Faction’s Candidates
Next articleWhy Is Iran at the Brink of Downfall This February?