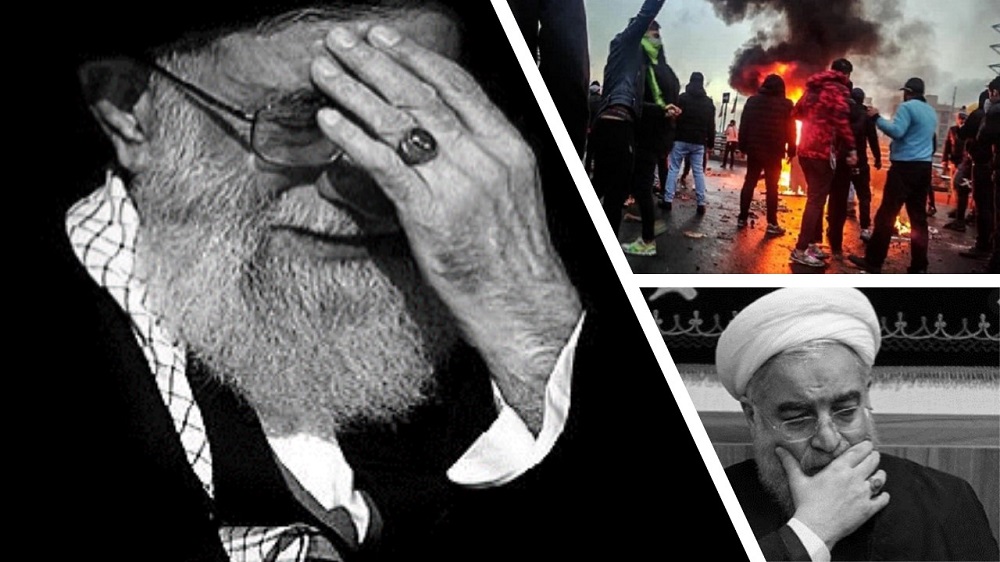 Iranian Regime at the Brink of Downfall

This year, the situation at home and in the region is significantly different than at any other time.

Many of the most loyal forces of the regime, active in Basij, as well as the IRGC forces, is reported to have distanced themselves from the regime and are reported to be in low spirits. The Iranian regime has lost its grip on what it calls Iran’s “strategic debt.” This is the use of Iraq and its proxy forces to export terrorism and extremism in Iraq and the region as one of its main pillars for power during the last few decades. In addition to this are the nationwide Iranian protests and the slogans which have called for the Supreme Leader and the Islamic Revolutionary Guards Corps (IRGC) to go away.

A quick look at the regime’s political, social, and economic status in the past year is very revealing:

IRANIAN REGIME ISOLATED MORE THAN EVER

Following the U.S. departure from the Joint Comprehensive Plan of Action (JCPOA), the U.S. sanctions were reinstalled one after the other. In addition to the secondary sanctions, the U.S. Treasury Department has issued a new advisory to the Maritime Petroleum Shipping Community, literally blocking the Iranian regime’s attempts to by-pass the sanctions, effectively canceling the Iranian regime’s oil exports.

It later expanded the sanctions to petrochemical products, the main source of income for the regime after oil and gas.

On February 4th, 2019, following the Iranian regime’s breach of the UN Security Council resolution 2231, and the testing of a ballistic missile capable of carrying nuclear weapons, the EU3 in a joint statement, unanimously adopted by the bloc’s ambassadors, called on Tehran to put an “immediate end” to its “unacceptable behavior” or risk destabilizing the region, reported EurActive.

On July 31st, 2019, the U.S. Treasury Department identified the Iranian regime’s foreign minister, Javad Zarif, for acting on behalf of the supreme leader of the Iranian regime. The designation brought further isolation for the regime.

Due to the Iranian regime’s lack of transparency in observing the international standards against money-laundering and terrorist financing (FATF), it failed to reach a practical agreement with the EU, in materializing the INSTEX mechanism.

On September 4th, 2019, Reuters reported: “A European trade mechanism to barter humanitarian and food goods with Iran will not work until Tehran sets up a mirror company and meets international standards against money-laundering and terrorism financing, a French diplomatic source said.”

Meanwhile, a spokesperson for the Iranian regime’s Expediency Council, which is to decide whether to adopt the Combating the Financing of Terrorism (CFT) legislation, a requirement for the FATF standards, announced that since the one-year deadline for this organization had expired on January 21st, the assignment of this bill related to the work of the Financial Action Task Force (FATF) should be considered finished. The same deadlock applies to the Palermo Convention, the UN Convention against Transnational Organized Crime.

Joining the FATF and specifically adopting its main bills, the Palermo Convention and the CFT, are among those conditions that the regime is unable to accept, despite its dire economic situation. This will further isolate the already isolated regime.

On January 5th, 2020, the Iranian regime announced it would no longer adhere to the 2015 nuclear deal. The announcement was designed to bully the EU3 into adherence with the regime’s conditions, providing a way out of the sanctions, while continuing its nuclear and missile program.

The UK, France, and Germany took a step towards triggering the agreement’s dispute resolution mechanism, which opens the door for the imposition of UN sanctions on Iran. This move was considered to be the last step before the complete isolation of the Iranian dictatorship.

Moreover, the United States Congress, approved a bipartisan resolution on the 28th of January 2020, supporting Iran protests and condemning the inhumane crackdown on protesters during the November uprising. The resolution also condemned the Iranian regime’s terrorist plots against the MEK, Iran’s main opposition organization. A move that very clearly signaled the Iranian regime’s illegitimacy in the eyes of the country’s Democrats and Republicans despite all the differences and disagreements among them.

Due to sanctions that have prevented the sale of oil and petrochemical products, a very corrupt system that systematically plunders large chunks of the country’s budget by the ruling mullahs and their families, the regime is facing a bankrupt economy with no solutions going forward.

“#Iran’s petrochemical and petroleum sectors are primary sources of funding for the Iranian regime’s global #terrorist activities and enable its persistent use of violence against its own people,”said U.S. Secretary of @USTreasury Steven Mnuchin.@stevenmnuchin1 #IranRegimeChange

This is while most of the country’s budget is spent on developing nuclear and missile weapon programs, or on funding terrorists and proxies of the regime in Iraq, Syria, Yemen, and Hezbollah in Lebanon, etc. and in domestic repression.

Last year, on every occasion, the Iranian people took to the streets to express their outrage at the unbearable living conditions of over 80 percent of the population who are living below the poverty line.

While an analysis of the Iranian regime’s economic downfall requires a separate report, it’s worth noting that Iran has never been in such a situation before and on the brink of economic collapse.

The Essential Threat and What the Mullahs Fear The Most

Those who follow events in Iran closely do not doubt that this regime is on the brink of its downfall. It’s only a question of what will ignite the outraged public and when.

The dying economy and the unprecedented isolation of the Iranian regime, its recent ongoing failures in expanding its religious extremism beyond Iran’s borders, and the recent blows to its terror machine in Iraq and beyond, are heavy blows to the unstable regime. What must be taken into account for anyone to understand the politics in Iran, is the fact that the main ongoing fight is not between Iran and other nations, but between the ruling mullahs and the overwhelming majority of the Iranian people who have shown time and again that they do not want this regime and who care for nothing less than regime change for freedom and democracy.

This is the most important aspect of any analysis of the situation in Iran. What has changed dramatically this February compared to the last is that the nation’s people have repeatedly and continuously taken to the streets, completely defying the ruling dictatorship. This can well be seen in the recent university students’ protests in the aftermath of the inhumane downing of the Ukrainian airliner, killing 176 innocent people, and the regime’s lack of transparency in what happened. The protesters attacked the heart of the regime with slogans, such as: “So many years of crimes, Death to the Supreme Leader,” “Commander-in-Chief, resign, resign,” “We did not give martyrs to compromise and praise the murderous leader,” “Death to the dictator,” “Khamenei is a murderer, his rule is null and void,” and “Khamenei, hear us, we are the people, not thugs.”

Most of the slogans are targeted at the IRGC, the main force behind the repression in Iran. Many are shouting: “We do not want the Shah or the Leader (Khamenei), we do not want the bad or the worse”, clearly expressing their aspirations for a free democratic Iran.

A large crowd of #IranProtesters join the students from Amir Kabir University in detesting the tyrants, be it the Shah (the previous tyrant) or the current Supreme Leader, #Khamenei. January 11, 2020, Hafez Street (AmirKabir Univ)#IranProtests#FreeIran2020 pic.twitter.com/bqtVNenTVa

The fact that the society is fed up with the ruling elite is what the mullahs fear the most and, more importantly, its support and allegiance to the MEK resistance units which have been based on the regime’s admittance mobilizing the protests around the country. This is what the Iranian regime fears most and why the terrible political, social and economic parameters point to the direction of regime change in Iran more than any other time before.

There is also a message in this for the world’s powers, particularly those European countries that are still prioritizing their short-term economic interests over the morals and humanitarian values that the EU stands for. The message is that its high time that the aspirations of the Iranian people for a free Iran are respected, and to side with the Iranian people and their organized resistance, the MEK, for a free and democratic Iran.