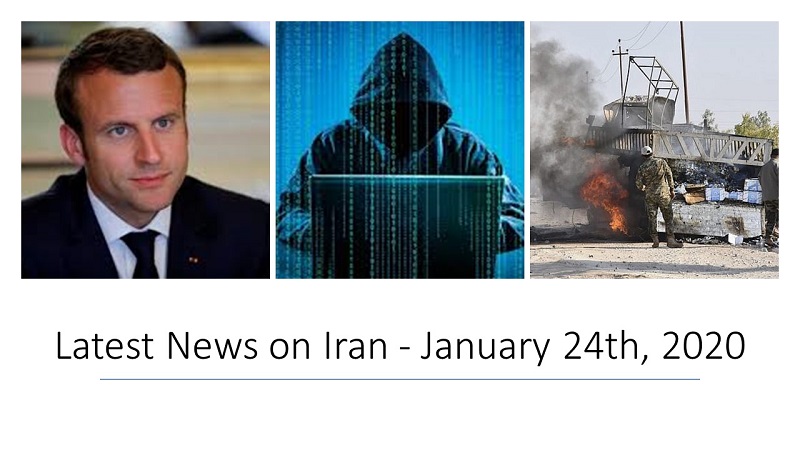 Written by Mansoureh Galestan on 24 January 2020.

President Emmanuel Macron announced yesterday that “In the current context, France is determined that Iran will never acquire a nuclear weapon, but that we will also avoid all military escalation in the region,” reported Reuters.

France, Britain, and Germany have kickstarted a process that could lead to United Nations sanctions being re-imposed on the regime and the collapse of the 2015 nuclear deal, after triggering the deal’s dispute resolution mechanism.

France, along with Britain and Germany, declared that the Iranian regime is in violation of the 2015 nuclear pact last week. They launched a dispute mechanism that could see the matter referred back to the Security Council and the re-imposition of U.N. sanctions.

Norwegian Police’s Security Service has interrogated two Iranian researchers from the Norwegian University of Technology and Natural Sciences (NTNU). Police suspect these two researchers have been involved in hacking the computer system of the university in which secret information could be transferred to Iran.

Catrina Tunstad, the legal officer for the Norwegian Police, told NRK TV that the Police are concerned about the potential to link the formulas and experiments that could be used in achieving the development of weapons of mass destruction.

The Financial Times had previously written about massive hacking activities of the Iranian regime in various European and American universities:

HEZBOLLAH BASE ATTACKED NEAR SYRIAN BORDER

An unidentified aircraft attacked a military base used by the Hezbollah terrorist group near the Syria-Iraq border overnight, Thursday-Friday, according to the Al-Hadath and Al-Arabiya News Networks.

The airstrikes reportedly targeted the Hezbollah headquarters near the Iraqi town of al-Qa’im, according to the al-Hadath and al-Arabiya news outlets. The aircraft carried out three waves of strikes, the reports said.