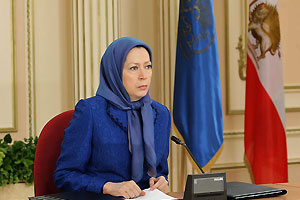 Maryam Rajavi: The protests of Iranian workers, the struggles of the nation as a whole, and the steadfastness of the organized resistance movement herald a new era

NCRI – Mrs. Maryam Rajavi congratulated Iran’s toiling workers on the International Labor Day and noted that the growing trend of protests and strikes bespeaks of their determination to overthrow the Velayat-e Faqih regime and put an end to its oppression, plunder and abuse.

Mrs. Rajavi pointed out that at least 1,300 worker strikes, sit-ins and demonstrations over the past year, specifically dozens of protests in recent weeks attest that Iranian workers defy the Velayat-e Faqih regime and will not give in to its injustice.

In the 70 years since the draught after the Second World War, Iran’s workers have never been so poor and devastated with no job security or monthly salaries and yet in such circumstances, they have stepped up their confrontation with the ruling regime.

Last autumn, the Central Bank declared that an Iranian family’s expenditure last year was 31.4% higher compared to their expenses in 2012.1 The situation which has driven many families below the poverty line is worse for workers.

Regime officials have acknowledged that “90% of the workers’ community in the country live below the poverty line and the other 10% is not much above the line.” 2Since 2005, workers’ purchasing power has decreased by 73%3 and “the gap existing between labor wages and their household expenses afflicts more than 50% of the total number of job-holders and has compelled them to engage in unofficial markets, act as middlemen, or find night-jobs, half-time jobs and the like to earn their living.”4

“At least 93% of workers are employed on temporary contracts from one month to one year.”6 So they are deprived of health care and accident insurance, retirement salary and receive the lowest possible wage. Women are the prime victims of these oppressive contracts. They have to accept low-income jobs with long working hours and ironically they are the first to get dismissed. With the slightest problem in the financial situation, factories dismiss their female employees. Every year over the past nine years, Iran’s labor markets have seen dismissals of more than 100,000 women.7 Unemployment rate has steadily increased since Rouhani took office and three-fourth of Iran’s educated women never get employed.8

In addition, government statistics show that the number of single parent families has reached 2.5million.9 Only 18% of these single parents have employment and the rest are unemployed and their families live in complete destitution.

There have been more shocking reports in recent months of workers committing suicide or self-immolation as a result of these painful circumstances. In January, three workers committed suicide in Agh-Darreh mine, Takab. In March, a young peddler by the name of Youness Asakereh set himself on fire in Khorramshahr. In April, Hamid Farrokhi , a toiling worker burned himself to express his protest to such inhuman conditions.

Yet, the courageous young men of Khuzistan in a moving act of protest cried out, “We are Youness!” And of course, this is the cry of youths all across the country.
Poverty and destitution coupled with widespread dismissals and lack of job security for workers are byproducts of inhuman policies of the Velayat-e Faqih regime that has turned Iran’s labor force into the world’s cheapest to cut down on the ramifications of its various crises.

The mullahs’ president, Hassan Rouhani actively pursues the policy of workers’ victimization. He proposed a bill to the parliament to “remove obstacles of production”. Ratified last week by the Council of Guardians, the bill actually removes the obstacles of firing workers and has furthered the ground for imposing temporary contracts.
Astronomical expenditures to support the wars against the peoples of Syria, Iraq and Yemen as well as the expenses of its nuclear and missile projects are paid from the pocket of Iranian nation and toiling masses. Yet the mullahs refuse to cut down on these colossal expenditures.

The economic crisis in Iran is basically rooted in the deadly crises engulfing the clerical regime and can be resolved only by toppling their tyrannical rule.
Mrs. Rajavi called on the brave, courageous workers of Iran and said: On the International Labor Day, I call on you to expand your protests and step up your resistance for overthrowing the Velayat-e Faqih regime hand-in-hand with your fellow compatriots, specially students and teachers and in conjunction with the organized Resistance and inspired by the endurance of the pioneers in Camp Liberty.

The path to freedom, equality and justice passes through regime change in Iran which can be made possible in our own hands. Mrs. Rajavi called on her fellow countrymen and women to assist the families of imprisoned workers and not hesitate in providing the needs of families whose breadwinners have lost their jobs.

The protests of Iranian workers, the struggles of the nation as a whole, and the steadfastness of the organized resistance movement herald a new era where fundamental freedoms and rights are safeguarded for Iran’s workers where they enjoy the right to form syndicates and labor associations, to go on strike, stage protests, enjoy job security, health insurance and unemployment benefits, an Iran where men and women are equal, all discriminatory laws are abolished and child labor is banned.

Secretariat of the National Council of Resistance of Iran
May1, 2015