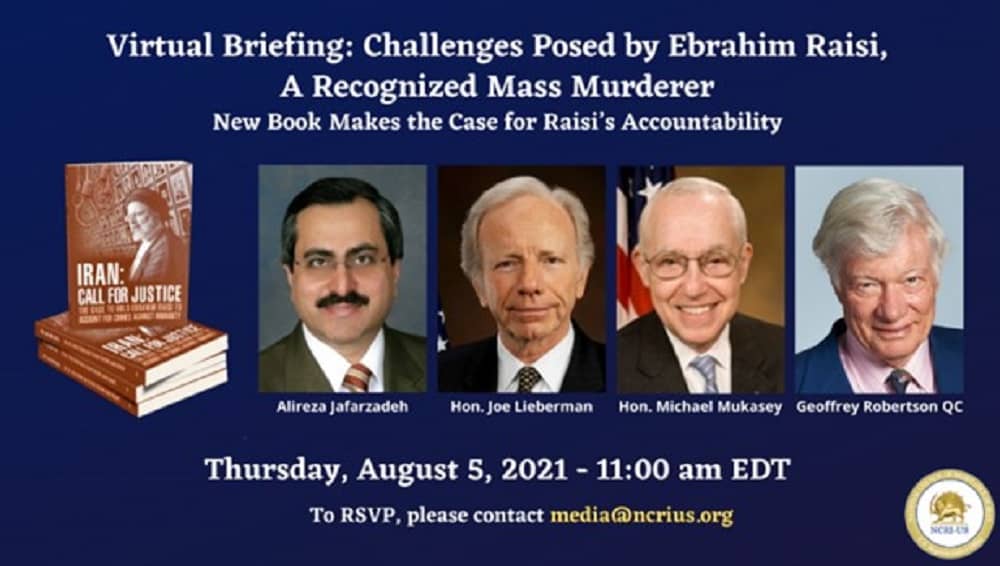 On Thursday, August 5, 2021, the U.S. Representative Office of the National Council of Resistance of Iran (NCRI-US) held an online briefing. The discussion focused on the challenges of implementing an appropriate Iran policy following the inauguration of Ebrahim Raisi, internationally recognized for his crimes against humanity and his key role in the massacre of some 30,000 political prisoners in 1988.

The event speakers were Michael Mukasey, 81st U.S. Attorney General; former U.S. Senator Joe Lieberman; and Mr. Geoffrey Robertson QC, a distinguished human rights barrister, academic, and author.
Mr. Alireza Jafarzadeh, deputy director of the Washington Office of the NCRI, and author of The Iran Threat, presented a new book and moderated the event.
In the briefing, Jafarzadeh introduced the new book, released by the NCRI-US, IRAN: Call for Justice; The Case to Hold Ebrahim Raisi to Account for Crimes Against Humanity.
In his opening statement, Mr. Jafarzadeh said:

Today, we have a distinguished panel, discussing Ebrahim Raisi as he swears in to take over as the new president of the Iranian regime and the World, particularly the United States and Europe should do in having an effective policy in dealing with Iran, now that you have a mass murder at the helm.

Let me first introduce our new book that was released that just this morning. The book is titled Iran: call for justice and the case to hold Ebrahim Raisi to accounts for crimes against humanity. This book comes at six Chapters and 96 pages. It elaborates on the life of Ebrahim Raisi, the regime’s new president. It has an entire chapter on 1988 that Massacre of some 30,000 political Prisoners, the book collaboration, Raisi’s role in the mass murder, and suppressing dissent. There is an entire chapter also dedicated to accountability and how the tide has now turned. The book also elaborated on, how Raisi was selected as the new president as the supreme leader Khamenei paved the way and clear the field for him to assume the presidency of this repressive regime out of absolute desperation.

The following is the experts of the speeches: 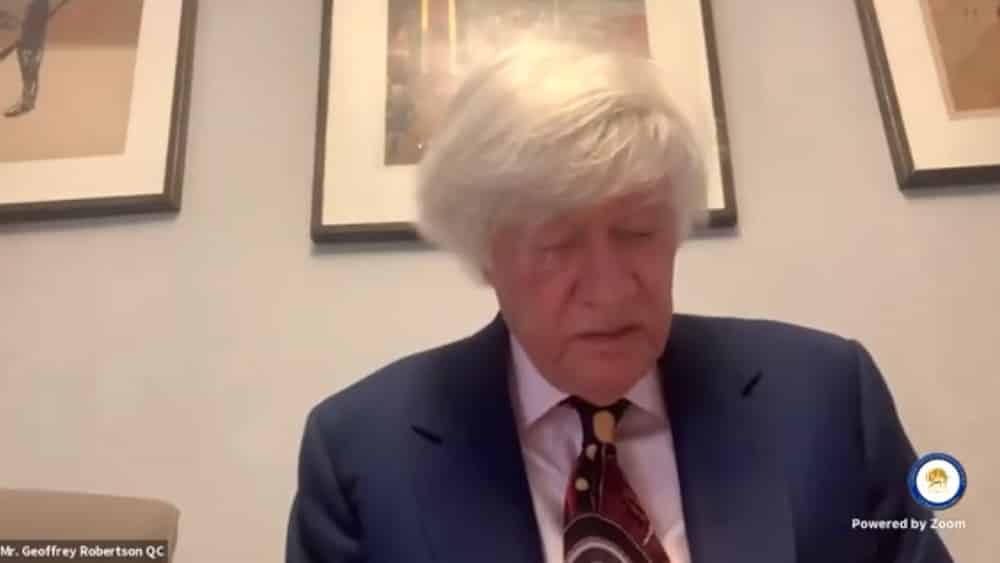 .@RobertsonQC explains the process of questioning the prisoners in the 1988 massacre, and sending them to the gallows, calling the 1988 massacre the worst crime against humanity, since the death marches.https://t.co/M7cxjt7PkU

My conclusion was that the 1988 massacre in Iran was the worst crime against humanity committed against prisoners since the death marches of the American and Australian soldiers by Japan at the end of the Second World War. Those who ordered those that marches were convicted and punished by International tribunals in Tokyo but those how ordered the Iranian massacre have not only being allowed impunity but they’ve risen high in the country’s government. And one of them Ebrahim Raisi risen to the presidency. Now his role, beyond any reasonable doubt was to sentence the prisoners to death without any right to trial, be represented by a lawyer without any right at all. He was primarily responsible for the murder of thousands of inmates. Many of them had already served their sentence. And they were held after their time has passed, most of the sentences have been protesting students. But he was a member of the death committee which supervised two waves of executions in Iranian prisons. The first wave in July and August 1988, and the oppositionists, belonging to the MEK group, and the second wave, in September of men who are Communists, or somehow disagree with the theological State
The Magnitsky law last year was adopted by the European Union and there are now 31 democratic countries that have these targeted sanctions for use against perpetrators of human rights abusers. I have to say that they could be no individual whose name should be higher on every country Magnitsky list than Raisi…. he is an international criminal, he should be put on trial, wherever, whenever he could be apprehended and at least his name being on the targeted sanctions list would prevent his atrocities from being forgotten. 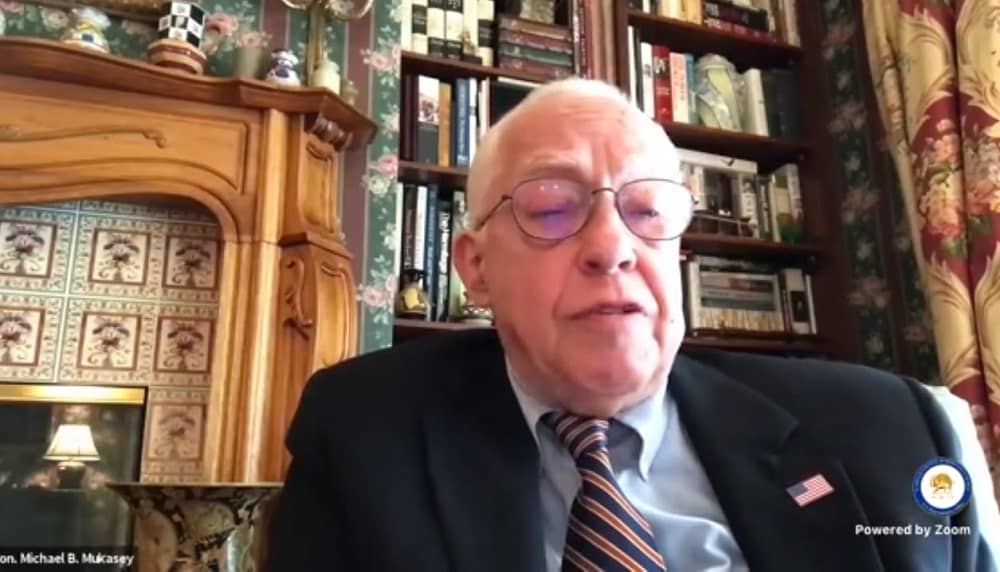 Judge Michael Mukasey, former US Attorney General: There's plenty of legal precedents that could be invoked to bring Raisi to trial if there's the political will. #Iran #ProsecuteRaisiNow #RaisiMassMurdererhttps://t.co/29QxocMYGz

The overwhelming majority of those tortured and executed in the 1988 massacre and targets of this fatwa was principally members of the MEK. This Committee in which Ebrahim Raisi participated, delivered its judgments against prisoners in proceedings that were a mockery of the concept of a trial involving simply asking a few questions of the accused mainly involving their beliefs and political affiliation, and then directing, them to be killed. Executions were carried out immediately. The prisoners being marched directly from the place, where their sham files were held to the Gallows. Somewhere hanged in a way that we’re sure that they would die by strangulation, rather than by breaking a spinal cord, and others were executed by firing squad. many of these facts were made known as early as the fall of 1988 to a Salvadorian professor and Diplomat named Galindo Pohl, who has been appointed as a special Rapport and reported to the general assembly of the United Nations about the execution of some two hundred prisoners Evin prison and the burial of more than 800 in mass graves outside Tehran. But this report was not followed up either by Galindo Pohl or by those at the UN.
I think anyone who believes that any senior member of the current regime would even consider giving up power voluntarily, given the fanatical ideology of the regime, the enormous wealth amassed and their bloody record is simply a delusion. When they go down, it won’t be voluntary. Perhaps the most convincing evidence of this is a very selection today and it would be insulation today, or Raisi as president. What shows is the current supreme leader Ali Khamenei and those who follow his orders had no regard, whatever for appearances. They put in place someone they believe can be relied on to use any measures, however, brutal to keep the regime in power. 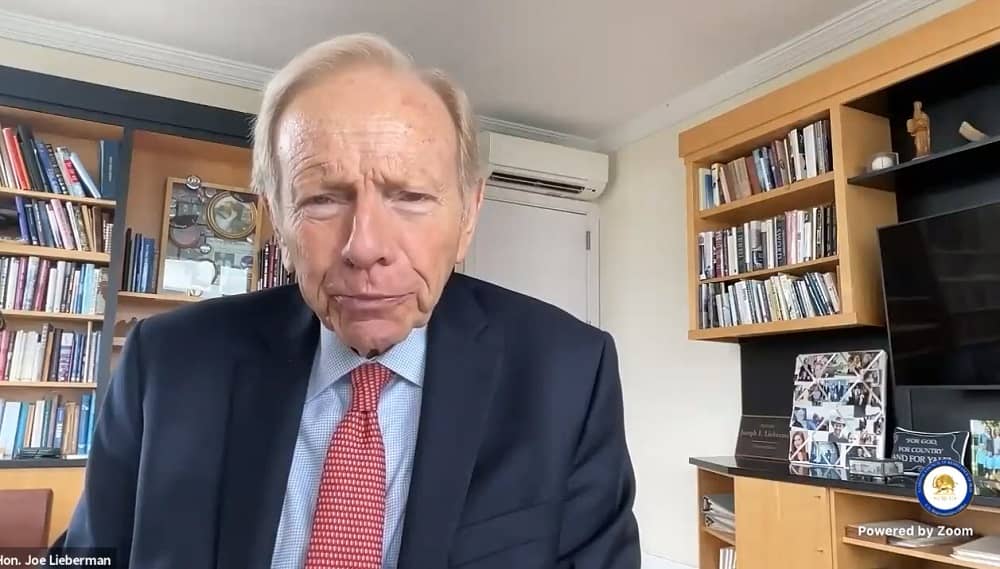 Senator @JoeLieberman:"'Churchill said, a farther backward you can look, farther forward you can go.' The Iran regime has made the Iranian people political & economic slaves." #Iran #ProsecuteRaisiNow #RaisiMassMurdererhttps://t.co/18mO34YL1f

During its 42 years in power, this evil and extreme regime in Tehran has spent enormous amounts of the treasure that belongs to the Iranian people supporting foreign terrorists, in building a nuclear weapons program, and sophisticated missiles that can carry those weapons to the designated enemies of the current regime and those enemies are in the Arab world and Israel and yes, in the United States of America within Iran itself. This regime has imposed one of the most brutally despotic governments in the world taking from its talented people their political and economic freedom, which really is their birthright. No single act, in my opinion, defined the regime in Iran were clearly and a tragically and painfully than the murderer of, as many as 30,000 people in Tehran, Iranian citizens, for only one reason that they were political opponents of the regime in the 42 years since 1979, the regime in Tehran has brought to political power and an awful group of leaders of presidents. Some claiming to be moderate but really not all following the extremist directions of the two men who in that time have been Supreme Leaders. Today by far the worst ever to serve as president of the Islamic Republic of Iran, Ebrahim Raisi is being sworn in as president. And I don’t say that lightly, I suppose, looking back at history or many people would say, what, what, about Ahmadinejad. Ahmadinejad was an extremist, he was a fanatic and he said, outrageous and offensive things, but Raisi comes to this high office of this country was such a great history with the blood of more Iranians on his hands than any of his predecessors. Probably even more than most of his predecessors’ combine.

And there was no question that the regime in Tehran believed for years that this genocide that occurred 33 years ago, was long forgotten by the rest of the world. In fact, there was only one group and one person that constantly was calling out for Raisi to be held accountable for the genocide he oversaw in 1988. The person and organization were the National Council of Resistance of Iran and the leader was Mrs. Maryam Rajavi. Its really quite encouraging to say that Mrs. Rajavi and the NCRI’s constant returning to the facts here, the remarkable, report of that, the Barrister Robertson did the concern expressed by many of the United Nation, the persistent voice being brought here by non-governmental organizations that are widely respected like Amnesty International and human rights Watch, all of them are saying this man, Raisi, cannot be allowed to lead a great nation.

Iran: A Fatwa Which Took the Life of 30,000 Political Prisoners in 1988 Massacre
Previous articleRecognizing Raisi as Iran’s President Fuels Impunity Over Human Rights Violations
Next articleIran State Media Acknowledge Economy Is on Freefall