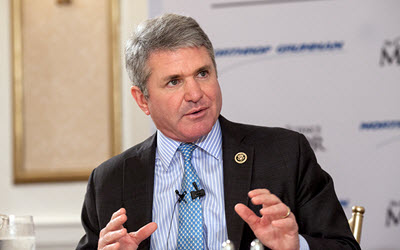 McCaul Statement on Review of Iran Deal by Trump Administration

WASHINGTON, D.C. – Today, Chairman Michael McCaul (TX-10) – a senior member of the Foreign Affairs Committee – released the below statement following the administration’s decision to launch an interagency review on the Iran nuclear deal.

Chairman McCaul: “I have long stated that any nuclear deal that includes sanctions relief without addressing Iran’s support for terrorism and ballistic missile testing is a flawed deal not worth the paper it is written on. The Iranian regime is directly responsible for terror attacks that have resulted in the deaths of Americans, and to this day continues to export Iranian terror through its support of proxies such as Hamas and Hezbollah. I applaud the Trump administration for launching a review on whether continuing to lift sanctions against Iran is in the security interest of the United States. Once this review is completed, I look forward to working with the administration to take any additional steps necessary to prevent the world’s leading state sponsor of terror from endangering America and our allies.”

Congressman Michael McCaul has represented the 10th District of Texas since 2005. Currently, he serves as Chairman of the House Committee on Homeland Security and senior member on the House Foreign Affairs Committee.