Cheney vows Iran will not get nuclear weapons 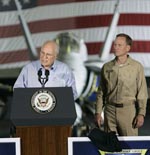 ABOARD THE USS JOHN C STENNIS (AFP) – US Vice President Dick Cheney warned Friday from the hangar deck of a US aircraft carrier in the Gulf that the United States will not let Iran get nuclear weapons.

"We’ll stand with others to prevent Iran from gaining nuclear weapons and dominating this region," he told thousands of sailors on the nuclear-powered USS John C. Stennis as it cruised roughly 240 kilometres (150 miles) from Iran.

Cheney, who spoke as five warplanes stood arrayed behind him, said the US naval presence in the region sent "clear messages to friends and adversaries alike."

His comments came as he visited the United Arab Emirates on a Middle East tour to ask Arab allies to step up their efforts to help war-torn Iraq and to curb Iran’s growing regional influence.

He spoke ahead of the arrival of Iranian President Mahmoud Ahmadinejad in the United Arab Emirates on Sunday in the first visit by an Iranian head of state to the close US Gulf ally since the 1979 Islamic Revolution in Tehran.

Cheney, who came here after a surprise two-day visit to Iraq, has refused to rule out the use of force against Iran’s nuclear programs if diplomacy fails to convince the Islamic republic to freeze sensitive activities.

US President George W. Bush in January ordered a second US aircraft carrier group to the Gulf and announced the deployment of a Patriot missile defense battalion to the region to protect allies against potential strikes.

Bush also vowed that US forces would "seek out and destroy" any networks funneling weapons or fighters from Syria or Iran into Iraq, where deadly sectarian violence has fueled the war’s deep unpopularity with the US public.

"Success in Iraq remains critical to our national security," said Cheney, who pressed leaders in Baghdad Wednesday and Thursday to step up efforts at national reconciliation amid a US-led security crackdown.

"The ultimate solution in Iraq will be a political solution. But that requires basic security, especially in Baghdad, where our troops are working beside Iraqi forces to carry out our new strategy," said Cheney.

Cheney, who spoke four years after Bush declared victory in Iraq under a "Mission Accomplished" banner, told the crew "we want to complete the mission, get it done right and return with honor."

Despite polls showing that a majority of the US public favors setting a timetable for withdrawing from Iraq, Cheney insisted that "the American people will not support a policy of retreat.

"The enemy tactics are barbaric," he said on the ship, which was roughly 22 miles off Abu Dhabi. "We can expect more violence as they try to destroy the hopes of the Iraqi people."

The Stennis has 65 aircraft, 44 of them strike aircraft, and has been involved in operations to help US-led forces in Afghanistan battle Al-Qaeda extremists and the resurgent Taliban Islamist militia.

Before Cheney spoke, Captain Brad Johanson drew a laugh from his sweaty crew in the sweltering hangar by telling them: "We just got an announcement out of the UN that the Taliban have been put on the endangered species list."

"I think it’s pretty neat getting attention from people pretty high up in the government. It breaks up the monotony of just sitting in the middle of the ocean," said Mulhern, who works in the reactor department on the ship.