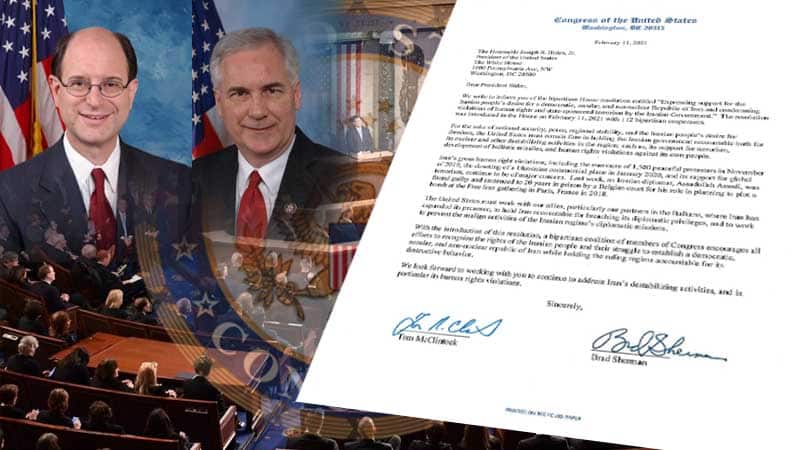 On Thursday, Congressman Rep. Tom McClintock (R-CA) and Rep. Brad Sherman (D-CA) wrote a letter to the United States President Joe Biden, notifying him of the resolution they have co-sponsored, calling for a free and democratic Iran and condemning the clerical regime’s human rights violations and terrorism.

House Resolution 118 has already been signed by 112 members of the U.S. House of Representatives from both parties. H. Res. 118 underlines that the House “stands with the people of Iran” in their struggle against the regime and “recognizes the rights of the Iranian people and their struggle to establish a democratic, secular and nonnuclear Republic of Iran.”

In their letter to President Biden, Congressmen McClintock and Sherman said the United States “must remain firm in holding the Iranian government accountable for its nuclear and other destabilizing activities in the region, such as, its support for terrorism, development of ballistic missiles, and human rights violations.”

“With the introduction of this resolution, a bipartisan coalition of members of Congress encourages all efforts to recognize the rights of the Iranian people and their struggle to establish a democratic, secular and non-nuclear republican of Iran while holding the ruling regime accountable for its destructive behavior,” read the letter.

The full-text of this letter is as follows:

Would Lifting Sanctions and Negotiations With Tehran Boost Iran’s Economy?