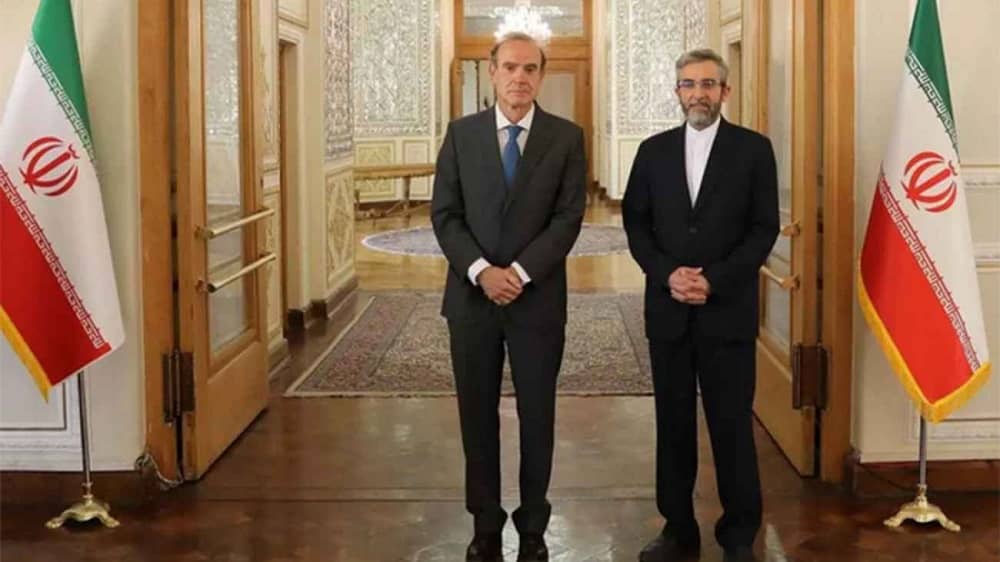 Josep Borrell, the head of foreign policy for the European Union, struck a predictably optimistic tone in the wake of a visit to Tehran by Enrique Mora, the coordinator for talks aimed at restoring the 2015 Iran nuclear deal.

But, since taking office in August, the regime’s new president Ebrahim Raisi has been pushing back against those expectations by dragging his foot with the negotiations.

If anything, Mora’s visit to Tehran appears to have lengthened the timetable by introducing the notion of preliminary talks between the Iranian regime and the EU, aimed at setting the conditions for restarting the talks in Vienna, which also involve EU member states Britain, France, and Germany, plus Russia, China, and the US as an indirect participant.

But even this remained highly uncertain in the wake of Mora’s visit, with Borrell saying of Iranian negotiators, “I am ready to receive them, if needed,” while also admitting that he had no clear sense of when that might happen.

Borrell’s statements on Friday took it for granted that Tehran does want to engage in serious diplomacy, even as it doggedly refuses to take any concrete steps toward that end. Borrell has long been insisting on appeasing the mullahs’ regime despite Tehran’s provocative steps in recent months.

There have been clear signs of this guiding principle in the past, as when Borrell undermined one of the most assertive actions taken by the nuclear deal’s three European signatories early in 2020. When the regime announced that it would no longer be complying with any of the terms of the agreement, the UK, France, and Germany announced that they would be triggering a dispute resolution mechanism established by the so-called Joint Comprehensive Plan of Action. The process should have led to the “snap-back” of all international sanctions on the Iranian regime within a matter of months, if not for the EU foreign policy chief’s announcement of his willingness to extend the process indefinitely.

Tehran exploiting this commitment to inaction in order to keep the JCPOA in a state of limbo so the regime can continue accelerating its progress toward nuclear weapons capability without facing any new international consequences.

Yet, some recent remarks by world leaders, mainly the U.S. Secretary of State Antony Blinken indicate the regime has not much time in delaying the negotiations and halting its nuclear activities.

“We are prepared to turn to other options if Iran doesn’t change course, and these consultations with our allies and partners are part of it” Blinken said recently, after noting that the White House considers time to be running short for a diplomatic resolution of the nuclear issue.

Blinken largely avoided specifics in discussing those options, which might include expanded and multilateral sanctions, greater diplomatic isolation, and other pressures.

In contrast to Borrell, the US has acknowledged that Iran’s refusal to reject new negotiations outright is not necessarily a sign that figures like Raisi should be taken seriously when they declare that they are in favor of an agreement with their Western counterparts. “Iran is giving us its answer by what it’s doing and not doing every day, and we need to take that into account,” said the U.S. Iran envoy Robert Malley.

The Iranian regime had never abandoned its nuclear program. “They thought that they won the negotiation. But we had a countermeasure, and while we proceeded with the case, they didn’t achieve what they planned for. We did not become trapped in the enrichment deadlock,” said Ali Akbar Salehi, former head of the regime’s Atomic Energy Organization in 2020.

This fact was later confirmed by the man who is now in charge of Iran’s nuclear talks.

“During those years, a good portion of time, we wanted to disrupt our adversaries’ assessment. To make this happen, we needed more time. We had to show our capabilities in practice so they could see them. The 20% enrichment couldn’t be done overnight. It required some work. Fordow and Arak [nuclear sites] needed some work. So, this required some time to achieve. Therefore, we bought some time. But when they were ready to negotiate a deal, the negotiation process expedited,” said Ali Bagheri Kani, the current deputy FM and potential negotiator with the world powers, in an interview in 2019.

The regime had kept its nuclear program secret until 2002 when the National Council of Resistance of Iran held a press conference revealing a uranium enrichment facility at Natanz and a Heavy Water plant at Arak. It should be noted that Tehran needs nuclear weapons to prolong its life as it faces a restive society.

Continuing dialogues with the regime are like fitting a square peg in a round hole. This regime would never abandon its nuclear program unless it goes under pressure and face a firm policy.