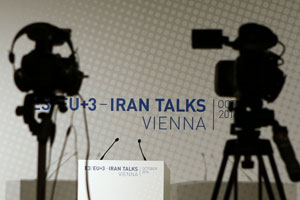 The last round of talks between the Iranian regime and the P5+1 group of nations (Britain, China, France, Russia, the United States plus Germany) aimed at reaching a comprehensive agreement to curb Tehran’s nuclear program failed to reach any tangible results.

The talks have been hit by disputes over what limits should be placed on the regime’s nuclear activities, particularly its enrichment of uranium.

The date of the next meeting between the Iranian delegation, the United States and EU foreign policy chief Catherine Ashton, who is shepherding the negotiations, will be announced later, according to Araqchi.
“It is likely a trilateral meeting between Foreign Affairs Minister Mohammad Javad Zarif, US Secretary of State John Kerry and European Union’s Foreign Policy Chief Catherine Ashton will be held in the next two weeks.”

Meanwhile The Wall Street Journal reported on Monday: “Despite continued talk of progress in Iran’s nuclear negotiations with six major powers, there remains a significant possibility a final deal will not be done by the Nov. 24 deadline, paving the way for an extension of the discussions.”

“In recent weeks, as the possibility of a second extension of the talks has loomed, an understanding is forming that Ms. Ashton should stay on to see the job through, according to several people close to the talks.”