How is it that Ahmadinejad Is still Iran’s president? 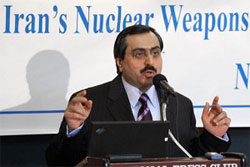 McClatchy Newspapers – By ALIREZA JAFARZADEH  May 11, 2012

The International Atomic Energy Agency (IAEA) announced on April 28th that it would resume discussions with Iran on May 14-15, the first in two months since the last meeting over concerns about Tehran’s nuclear activities ended in failure.

In early April, after a year-long suspension, the so-called P5+1 group (the five permanent United Nations Security Council members plus Germany) sat down for a day with the Iranian regime’s delegation in Istanbul.

Discussion over Iran’s nuclear program once again resumed, rekindling hope that this international crisis would be resolved through diplomatic maneuvering. Some are still expressing optimism that the talks could succeed. The West’s notion of success, of course, is a halt to Iran’s nuclear enrichment program. Tehran, in contrast, is seeking to have the sanctions imposed by the West lifted.

“One of the issues that should be taken into consideration, and is the request of the Iranian people, is the removal of sanctions,” the Iranian regime’s nuclear envoy, Saeed Jalili said after the talks. Tehran hoped to achieve this end without conceding anything, certainly not slowing, let alone halting its drive for nuclear weapons.

The latest information obtained by Iran’s main opposition, the Mujahedin-e Khalq (MEK), which was first to expose the regime’s nuclear program, reveals that the regime has in fact significantly boosted the activities of the entity tasked with nuclear weapons development. The secretive New Defense Research Organization (known by its Farsi abbreviation SPND) carries out research and testing on nuclear warheads and detonators, among other things.

According to the latest information by the MEK, the uranium enrichment activities at the new Fordow site, hidden deep inside the mountains near Qom, are closely monitored by the experts working at SPND, revealing the regime’s not so benign intentions which were the raison d’être for building Fordow.

Clearly, Tehran’s main objective in Istanbul was to further drag the process along. To accomplish this, all it had to do was agree to a second round of talks without making any concrete commitments. Tehran succeeded — the next round of talks are scheduled for May 23rd in Baghdad.

History does teach us, and the round after round, year after year of fruitless talks do persuade us to pessimism about the real chances of success for the current round of negotiations. For more than a decade, since Iranian dissidents first exposed the regime’s nuclear program, succeeding US administrations have expressed hope, and expectations were raised, about diplomatic talks with the Iranian regime. Each time, Tehran dashed those hopes.

Numerous packages of incentives have been offered to entice Tehran to end uranium enrichment. Whether under the administration of “moderate” President Mohammad Khatami in the late 1990’s, or that of his successor, the “hardline” Mahmoud Ahmadinejad, none have succeeded.

After the IAEA failed to get answers from the regime in 2007, the U.S. and its European allies once again tried to salvage the talks by promising fully normalized economic relations; Tehran rebuffed their generous overture.

When Barack Obama took office in 2009, Iran was already enriching uranium at 3.5 percent levels. Still, President Obama revived hopes for negotiations. Three years later, Tehran is enriching up to 20 percent and has enough enriched uranium to make four nuclear weapons, when enhanced to weapons grade. Instead of a peaceful solution, the specter of war is looming larger.

Undoubtedly, the lesson history teaches us is to take note of the trend: The Iranian regime has welcomed negotiations at every turn only to deflect pressure and buy time. If the West is looking to avoid an Iranian bomb or bombing Iran, it must realize that engagement is not an option. Time has finally come for fundamental change in policy.

In a speech introducing U.S. President Barack Obama during the Holocaust Memorial, Nobel Peace Laureate and Holocaust survivor Elie Wiesel said “have we learned anything?” We should join him to ask, “how is it that the No. 1 Holocaust denier Ahmadinejad is still a president?”

President Obama has a historic opportunity to avoid both dire outcomes by changing course and reaching out to the Iranian people and their organized opposition. The nuclear issue must be tackled in the larger picture of the Iranian crisis. Only regime change by the Iranian people offers a viable and enduring solution. Over one hundred Members of Congress and dozens of prominent former officials believe that the blacklisting of the opposition MEK, a goodwill gesture to Tehran, should have been lifted a long time ago.

Time is running out. The Arab Spring revealed all the power of suppressed populations. The U.S. has to focus on the Iranian people and their organized opposition as the key to building a free, democratic and non-nuclear Iran. That is the surest way to salvage a peaceful solution and avoid going to war.

ABOUT THE WRITER
Alireza Jafarzadeh is the author of “The Iran Threat: President Ahmadinejad and the Coming Nuclear Crisis.” He exposed the nuclear sites in Natanz and Arak in 2002, which triggered the International Atomic Energy Agency inspections of the Iranian nuclear sites.

Previous articleRepresentatives of Iranian Ministry of Intelligence (MOIS) in Tehran meet with the Special Representative of the UN Secretary General about Ashraf residents
Next articleIran Accelerating Nuclear Bomb Efforts?