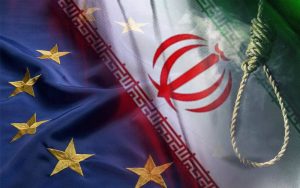 While on December 7 the United Nations Secretary-General Antonio Guterres counted the Iranian regime’s breaches of its 2015 nuclear deal with world powers, EU leaders have agreed not to set fresh preconditions on a revival of this agreement, thus, confirming their dedication to the appeasement policy.

In 2015, world powers signed the Joint Comprehensive Plan of Action (JCPOA) with the Iranian regime. The JCPOA had many flaws, its duration was too short, its scope was limited, and kept many ways open for the regime to acquire a nuclear bomb.

In addition, the deal failed to address Tehran’s missile program, support for terrorism, and gross human rights violations. The regime never abided by its commitments under the terms of the JCPOA.

On April 5, 2020, Ali Akbar Salehi, head of the Iranian regime’s Atomic Energy Organization, said, “Nuclear activities, as well as research and development on the nuclear fuel cycle, uranium conversion, and enrichment, despite the JCPOA, have continued.”

The regime never allowed inspectors of the International Atomic Energy Agency to visit its highly disputed nuclear sites, where according to the Iranian Resistance, the regime was pursuing its objective of producing nuclear weapons.

Later, on June 9, the IAEA in a report confirmed that “for over four months, Iran has denied access to the Agency, under Article 4.b.(i) and Article 5.c. of the Additional Protocol, to two locations and, for almost a year, has not engaged in substantive discussions to clarify Agency questions related to possible undeclared nuclear material and nuclear-related activities in Iran. This is adversely affecting the Agency’s ability to clarify and resolve the questions and thereby to provide credible assurance of the absence of undeclared nuclear material and activities at these locations in Iran.”

When in 2018, the United States withdrew from the JCPOA, citing Tehran’s noncompliance with the deal, the regime started a blackmailing campaign by gradually breaching its commitments to the deal.

The European countries sadly tried to help the regime and succumbed to the regime’s extortion campaign.

Josep Borrell, the EU’s foreign policy chief, joyfully announced he is “Chairing today a virtual ministerial meeting of the E3/EU+2 (China France, Germany, Russia, UK) and Iran” on Monday, “to re-emphasise our commitment to preserve the agreement.”

EU leaders are promoting negotiations with a regime whose diplomat-terrorist, Assadollah Assadi, is detained and being tried in Belgium on charges of terrorism.

Assadi and his three accomplices attempted to bomb the opposition rally in France in June 2018. The prosecutor of Antwerp in Belgium in his indictment confirmed that Assadi was operating on behalf of the regime.

EU leaders are cherishing negotiations with a regime that was condemned by the United Nations General Assembly in formally adopting a resolution condemning human rights violations in Iran – the 67th of its kind.

This regime has massacred over 30,000 political prisoners in 1988. Seven UN experts in a letter which was published in December 2020, called the 1988 massacre “crimes against humanity”, and asked for an international investigation.

European leaders say they cherish human rights which “are in the DNA of the European Union.” Mr. Borrell said: “When serious human rights violations happen, the EU must go beyond adopting resolutions and making statements, we must be able to act.”

But they have failed to keep this principle when it comes to Iran. The EU has thus far prioritized its economic interests over the security of its own citizens and human rights principles.

The 2018 bomb plot underlined what Winston Churchill once said: “An appeaser is one who feeds a crocodile-hoping it will eat him last.”

Now the EU should break its silence and end its appeasement policy. The EU should put more pressure on the regime, hold it accountable for its terrorism and human rights. The best way to prevent the mullahs from achieving a nuclear bomb is to adopt a firm policy that covers all aspects of the regime’s malign activities.