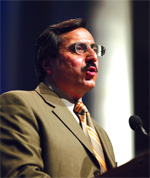 The claims by exiled opposition figure Alireza Jafarzadeh could not be independently verified but if confirmed would likely enflame the worsening standoff over Iran’s nuclear program.

Jafarzadeh, citing what he said was intelligence from the Iranian opposition and sources within the Iranian nuclear program, said Tehran had already committed serious violations before Tuesday.

"Iran has already manufactured as many as 5,000 centrifuge machines ready to be installed in Natanz, which is a clear breach of its agreements with the IAEA and the EU," Jafarzadeh said at a press conference here.

He said Iran had been continually building underground centrifuge cascade installation platforms at Natanz, which could be used in the process of enriching urnanium on a large scale suitable for a nuclear bomb.

Jafarzadeh, former spokesman for the Iranian opposition in Washington, released information in 2002 which amounted to the first outside glimpse into the Iranian nuclear program, and triggered International Atomic Energy Agency scrutiny.

He said that work at Natanz was now so advanced that construction could be finished at Natanz by the middle of this year, though it was unclear when installation of enrichment facilities would be complete.

"The 5,000 centrifuge machines are going to be installed in underground cascade halls … all of this has been going on while supposedly the program has been under freeze," he said.

Iran said Tuesday it was removing the seals on several nuclear operations, including a small 164-centrifuge cascade at Natanz — which in itself would be not be able to produced enough highly enriched uranium for a weapon.

But it said enrichment remained frozen. Tehran denies that it is seeking a nuclear weapon, and has been trying to draw a distinction between research into the fuel cycle and actual production of enriched uranium.

Senator Bob Menendez: A Return to the 2015 Iran’s Nuclear Deal Is Not Only Unrealistic and Unproductive, It Is a Fantasy