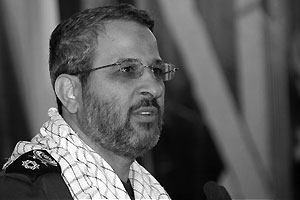 IRGC Brigadier General Gholamhossein Qeybparavar, the commander of IRGC forces in the Fars province said on Saturday: “You would be wrong to dare to want to inspect our military centers and whoever does look at IRGC centers we will fill his throat with molten lead.”

Speaking to officials of the Iranian regime, members of Basij paramilitary force and high ranking clerics in the city of Eghlid in the southern province of Fars, he said: “We have not begged our nuclear knowledge from the West and Europeans to give it to them easily. We have suffered a lot and have lot our best young scientists on this path.”

Qeybparavar’s remarks come as the question of access for international inspectors has become one of the main sticking points between Tehran and six world powers as they try to overcome obstacles to a final nuclear agreement one month ahead of a deadline.

According to information obtained by the Iranian opposition movement, the People’s Mojahedin Organization of Iran (PMOI/MEK), it was revealed on Thursday that the Iranian regime and the government of North Korea have extensively exchanged information and delegations of experts in the fields of nuclear weapons and nuclear warhead design as recently as late April 2015.