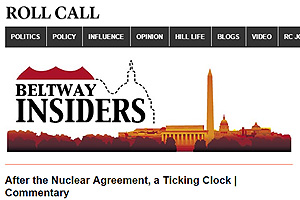 At the White House recently, U.S. President Barack Obama hailed the recently-announced nuclear agreement with Iran’s regime as “the best deal.” A closer look at the details of the Joint Comprehensive Plan of Action, however, provides little cause for celebration, writes Alireza Jafarzadeh, the deputy director of the Washington office of the National Council of Resistance of Iran (NCRI).

“First and foremost, the agreement does not actually prevent Tehran from having a nuclear weapons capability. To the contrary, it guarantees the regime several potential paths for building the bomb in the future. That’s because the JCPOA preserves and legitimizes Iran’s basic nuclear infrastructure — including an industrialized uranium enrichment program — with some restrictions that phase out in as little as a decade,” Jafarzadeh wrote on Thursday in Roll Call.

“The deal also allows the regime to conduct research and development on advanced centrifuges. This gives Iran the opportunity to master its technology and be in a position to create a small covert facility with only a few hundred advanced centrifuges, sufficient to produce enough fissile material for a bomb,” he said.

“Contrary to the White House talking points, the agreement does not in fact provide ‘anytime, anywhere access’ to suspect nuclear sites, including military sites. Instead it provides ‘managed access’ to sites, which eliminates the element of surprise so critical for intrusive inspections. It also calls for the formation of a complicated resolution panel to resolve disputes over inspections. That spells delay, and delay spells danger.”

“Most importantly, after 20 months of negotiations, the agreement does not include any specific arrangements to inspect the sites that are already in the crosshairs of the IAEA, including Parchin and SPND. Nor does it mention the need for interviews with key scientists.”

To make matters worse, Jafarzadeh argues, “the scope of sanctions relief in the deal is extensive and includes a large number of entities and individuals whose property is now blocked (those on the so-called ‘Special Designated Nationals’ list), including major Iranian financial institutions, the Islamic Revolutionary Guard Corps, and the Qods Force and its notorious commander, Qassem Soleimani. This financial relief can only serve to prop up the regime, which was teetering economically under the sanctions, and help underwrite the regime’s capacity for rogue behavior.”

“The agreement does not provide a mechanism to monitor foreign assistance to Iran’s nuclear program, including from North Korea, which has been a major partner of Iran in nuclear, missile, and warhead technology. Nor does it prevent Iran from outsourcing parts of its nuclear weapons program to foreign countries.”

Jafarzadeh said U.S. lawmakers should scrutinize the deal in an objective and non-partisan way.

“The agreement should not bar the United States from addressing the rogue behavior of the Iranian regime, namely its abysmal human rights record at home or its support for terrorism and its destabilizing role in the region. To the contrary, this is the time for the United States to ratchet up pressure and hold Tehran accountable on those areas as well. Otherwise, the deal’s unintended regional consequences will outweigh its alleged benefits,” Jafarzadeh wrote.

“Instead of further limiting Iran’s ballistic missiles program, the deal will actually lift restrictions on conventional weapons and missile programs in 5 and 8 years respectively. Given that Iran is considered the number one state sponsor of terrorism by the U.S. State Department, leaving Iran’s conventional weapons capability intact means one can only assume the Obama Administration expects a transformative shift in the regime’s ideology and tactics in the next few years.”

“Indeed if the reasoning behind relieving most of the restrictions in 10 and 15 years is that the world may face a different, more benign Iranian government at that time, it would be wise for the United States to help Iranian youth and women activists and all those who seek democratic change. At best the nuclear deal bought only a short amount of time. And the clock is ticking.”