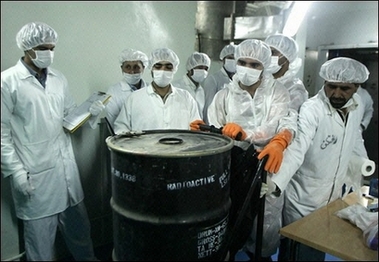 Hassan Rouhani, the president of the clerical dictatorship ruling Iran, said on Tuesday that Tehran was speeding up its nuclear program adding that it will not seek permission form anyone to pursue technological advancement.

Rouhani boasted that Iran has made “highly important progress in the nuclear field,” but that such advancements have been eclipsed by the ongoing nuclear negotiations with world powers.

“We don’t and will not take permission from anyone to make progress in science and knowledge,” he said.

According to Fars News Agency, Rouhani boasted that Iran has made “highly important progress in the nuclear field.” However, he added that these advancements have been held back by the ongoing nuclear negotiations.

In his speech, Rouhani also said that interacting with the world does not mean that Tehran will give up its scientific endeavors.

Rouhani said no one should think that negotiation with the world means that Iran will quit making progress in a certain branch of science.

Hassan Rouhani’s remarks comes as the Iranian regime and world powers have until a March 31 deadline to reach a political agreement on Tehran’s nuclear program.