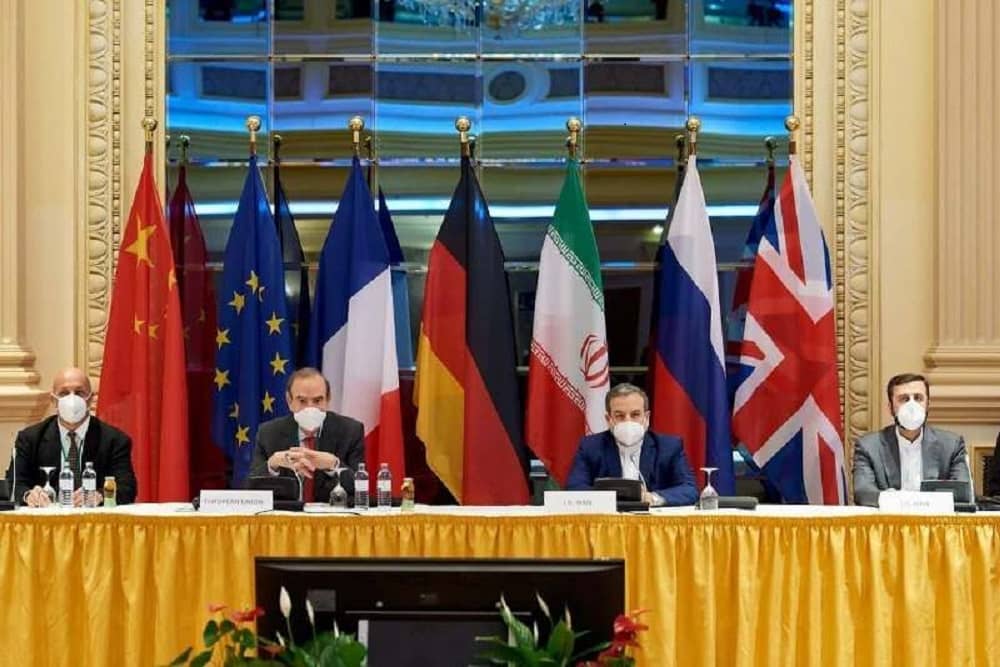 Even before nuclear talks resumed in Vienna on Monday, the Iranian regime officials continued their rhetoric about sanctions relief and nuclear extortion. On Tuesday, the lead Iranian representative to those talks, Ali Bagheri-Kani, even went so far as to say that the regime reserves the right to revisit the preliminary terms that were supposedly agreed upon during the six sessions that took place before the Vienna talks stalled in June. Other officials have plainly reiterated that they will accept no compromise in lieu of the United States simply removing all economic sanctions at once, before the Iranian regime does anything.

This ultimatum would have been absurd even if present conditions were akin to what they were when Iran first started violating the terms of the 2015 agreement known as the Joint Comprehensive Plan of Action. It is especially absurd now that nearly two years have passed since the regime declared that it would no longer be abiding by any of those terms whatsoever. During that time, Tehran has installed numerous advanced centrifuges for the enrichment of nuclear material, and has accordingly pushed its highest level of uranium enrichment from a pre-JCPOA high of 20 percent to a very nearly weapons-grade level of 60 percent fissile purity.

Of that lower threshold of 20 percent, the head of the Atomic Energy Organization of Iran has boasted that international inspectors underestimated the amount that Iranian facilities have acquired. Whereas the International Atomic Energy Agency estimated that stockpile to be around 80 kg at the time of its latest quarterly report, Mohammad Eslami vaguely declared that the real figure was “more than” 120 kg. Thus, the regime’s “breakout” time to a nuclear bomb has decreased in light of world powers’ inaction

What’s more, the regime declared months ago that it had started production of uranium metal, a substance that has virtually no practical application other than as a key component in the core of a nuclear warhead. The best possible explanation for this work is that it is merely aimed at presenting Western powers with the threat of a nuclear bomb in hopes of extorting concessions from them. This interpretation of the regime’s motives is supported by the remarks that Iran’s then-Intelligence Minister Mahmoud Alavi made last February.

Initially, Alavi reiterated the regime’s public assertion that its nuclear activities are only for civilian purposes. Some Western policymakers have taken that assertion for granted, occasionally citing a fatwa from the regime’s Supreme Leader Ali Khamenei which supposedly declares acquisition of nuclear weapons to be against Islamic law. “The fatwa forbids the production of nuclear weapons,” Alavi said, but then immediately pivoted to add, “but if they push Iran in those directions, it is not Iran’s fault. Those who pushed Iran in that direction will be to blame.”

These contradictory statements are reminiscent of the warnings offered by the Iranian Resistance. The Iranian Resistance was the first to reveal details of the regime’s clandestine nuclear weapons program, and ever since it has underlined that Tehran never suspended its push to acquire the bomb. Khamenei’s absurd fatwa is not binding and could be reversed in an instant by Khamenei whenever it was deemed convenient.

Not only did Bagheri-Kani and other current regime officials go into those talks insisting upon complete removal of US sanctions as a prerequisite for any agreement, but at least one former official elaborated upon Alavi’s threat from February, openly referencing the regime’s progress toward nuclear weapons capability. “When the country’s all-encompassing growth came concerning satellites, missiles, and nuclear weapons, and [Iran] crossed the various frontiers of knowledge, the issue became more serious for them,” Fereydoun Abbasi-Davani referred to Western powers participating in the Vienna talks.

In light of such comments, there should no longer be any doubt about Tehran’s willingness to contradict its own former declarations, and even its own religious edicts, in order to sprint toward nuclear weapons capability when it suits their interests. Neither should Western powers underestimate Tehran’s potential willingness to place such weapons in the hands of those who would use them as the ultimate act of terrorism. When a regime is willing to systematically execute 30,000 of Iranians in three months, one cannot easily overestimate the destruction it is willing to wreak beyond its borders.

The world leaders have routinely underestimated the probability of that threat being realized, and they have often given Tehran entirely too much credit as a negotiating partner.

Considering the posture the regime assumed at the re-opening of the Vienna talks, relevant Western policymakers should be seriously questioning their prior optimism. And those questions should promptly lead to the realization that Iran cannot be convinced, but must be compelled, through the most serious economic and diplomatic pressures, to give up its very real ambitions for a nuclear weapon.

Previous article
Report: Iran’s Terrorist Network in Africa and Its Implications
Next article
Iran: Noury Continues His Lies in the Court and Claims Khavaran Mass Gravesite Is a “Lie.”