Written by The Editorial Board
25th May 2021

Foreign Affairs Committee of the National Council of Resistance of Iran

EXECUTIVE SUMMARY
The Iranian regime has a long history of activity to acquire a nuclear weapon. It has continually concealed and lied about its nuclear activities to the world.
The regime’s original plan to acquire five nuclear warheads and build a nuclear weapon was seriously setback by the disclosure of the Lavizan-Shian site in May 2003 and the regime was compelled to change its methods, organization, and research and development locations to achieve its goal after that. This resulted in delays in its plans and program.
In effect, tireless efforts by the National Council of Resistance of Iran (NCRI), based on information received from the Mujahedin-e Khalq (MEK/PMOI), in exposing the Iranian regime’s nuclear duplicity and dangerous drive to obtain and blackmail the world with nuclear weapons, triggered inspections by the IAEA and ensuing measures adopted in the UN Security Council.
All the evidence cited in this report and all of that which has been learned about the regime’s efforts in these years suggest that the clerical regime is covertly continuing its nuclear weapons drive, and that even the JCPOA has been unable to halt the regime’s military nuclear weapons projects, and that the regime has maintained, continued and furthered its military nuclear apparatus and activities in violation of the JCPOA.
It has become evident that the Iranian regime is using its covert military nuclear program as leverage to blackmail and secure concessions to offset its vulnerability domestically, regionally, and internationally, as regime survival becomes increasingly tenuous.
The world owes a debt of gratitude to the many brave Iranians affiliated with the Iranian Resistance who preempted, forestalled, and prevented the Iranian regime from obtaining nuclear weapons.
The Iranian regime cannot be trusted, and the international community must remain vigilant. The solution to preventing the regime from obtaining a bomb is not to appease or provide it with concessions or bargain with it over its illegitimate military nuclear project, but to pursue a firm and principled policy vis-à-vis this regime, until such time that Iran is represented by a democratic, secular, and non-nuclear government. 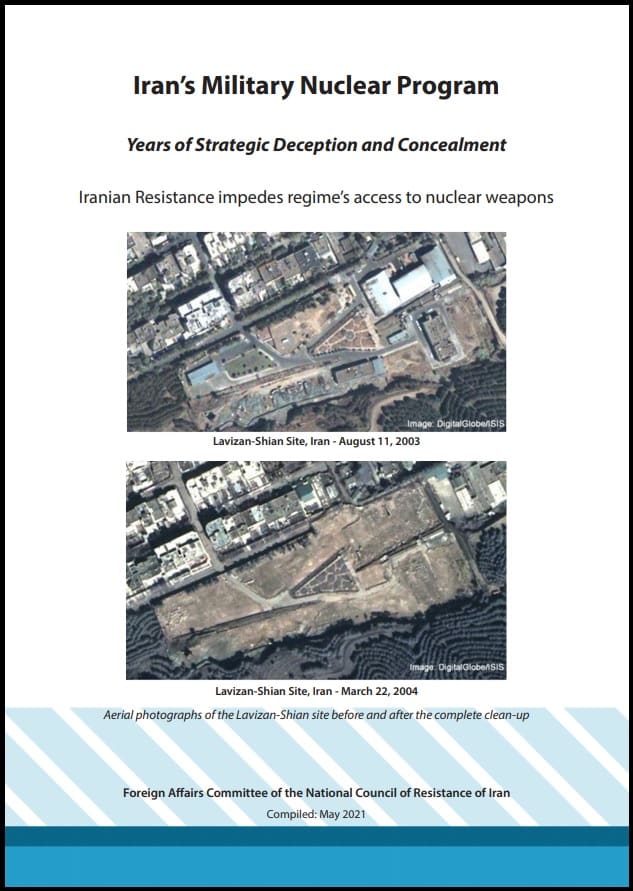