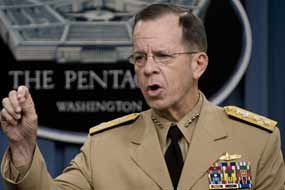 Former chairman of the Joint Chiefs of Staff, Retired Adm. Michael Mullen who served in both the George W. Bush and Barack Obama administrations said Sunday that the Iranian regime poses “a much more difficult challenge” than the threat posed by the ISIS.

Mullen said on NBC’s “Meet the Press” it’s the Iranian regime committed acts of terrorism, which led to the war in Iraq.

Mullen said: “And once we’re beyond ISIS, I think that the relationship we have with Iran, from the standpoint of what they’ve done for so long, will be based on the elimination of those kinds of terrorist activities that are evident throughout the region.”

From Arab countries in the region to Syrian opposition battling the Syrian dictator Bashar al-Assad there are mounting worries the United States is downplaying Tehran’s imperial aspirations while seeking to pull off a nuclear deal with Iran, Voice of America reported.

Last week, a senior adviser to Hassan Rouhani roiled the region by calling for a union between Iran and Iraq, arguing the geography of the two countries couldn’t be divided, although he noted there are practical obstacles to any unification.

In a March 8 speech, Ali Younesi, a former intelligence minister, said Iraq, is “the center of Iranian heritage, culture, and identity” and he talked about a “greater Iran” stretching to the Gulf and even parts of the Indian sub-continent.

“We cannot preserve our interests, national security, and historic identity without attention to Iran’s regional influence and borders,” Younesi said.
In an interview with French daily Le Figaro, the former head of NATO and the multinational forces in Afghanistan and CIA director, US General David Howell Petraeus warned against the threat by the Iranian regime in Iraq.

General Petraeus described the activities of Qassem Suleimani, the head of the Iranian regime’s Quds Force in Iraq, as ‘disturbing.’