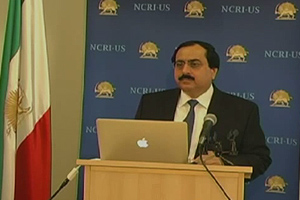 NCRI – The National Council of Resistance of Iran unveiled on Thursday a major report on the Iranian regime’s deceit tactics and strategies in nuclear negotiations with the world powers.

The unique report, unveiled by the NCRI’s US Representative Office in Washington, reviewed Tehran’s 12 years of negotiations with the EU3 and P5+1. Alireza Jafarzadeh, the NCRI-US Deputy Director, carried out the online briefing.

The report, which was prepared from public sources and sources inside the regime, assessed the principles of the negotiations from the regime’s perspective and the tactics used by Tehran to reach its objectives and to gain concessions in the negotiations.

The report’s key finding was that the mullahs’ Supreme Leader Ali Khamenei has insisted on three red lines in the negotiations:

“The framework that Khamenei has specified, and which the regime’s senior officials have been in consensus with him on, has been that the talks must only focus on previously revealed sites, projects and aspects of the nuclear program that cannot be denied. In the meantime, the apparatus in its entirety, especially the weaponization aspect and its various branches, must remain untouched, intact, and not mentioned in the talks at all. Attention and focus in this regard should be marginalized and made secondary issues in the talks,” the NCRI report emphasized.

“The above three points constitute the main pillars of the military aspect of the Iranian nuclear program. In other words, the main redlines for Khamenei have been to maintain the most crucial and fundamental aspects of the nuclear weapons program and he has reiterated this time and again. “

Shahin Gobadi of the National Council of Resistance of Iran said: “Khamenei’s goal has always been to obtain nuclear weapons, and sticking to the three key red lines that the report has established clearly shows his ultimate objective in this project, something that he has not been willing to relinquish.”

Khamenei fatwa, one of mullahs’ main ploys for “trust building”

According to the report, the clerical regime has deliberately focused on what it describes as “trust building” instead of “transparency.”

One of the main arguments to this effect has been the purported fatwa by Khamenei declaring nuclear weapons and other Weapons of Mass Destruction to be forbidden.

“However, a bit of scrutiny reveals that the purpose of such a fatwa is purely for deceiving the international community and devoid of any value, since there has never been any written document against nuclear arms in Khamenei’s handwriting and carrying his stamp. It is standard practice for all fatwas to be produced in this way and distributed via the press or official websites. Furthermore, not all prohibitory fatwas are binding for the government or officials.”

The report, reviewing two periods of the West’s intense negotiations with the regime (2003-2004) and (2013-2015) has been able to specify seven principles of Tehran’s approach regarding the talks and eight tactics used to reach these objectives.

Highlights of the principles of Tehran’s approach

1. It is the Supreme Leader:
Decisions are made at the highest levels of the Iranian regime (practically, the negotiating team just advances the strategy dictated by the regime’s leaders, in particular the Supreme Leader Ali Khamenei). The composition of key and decision-making figures on the nuclear program has not changed significantly in the past two decades and they remain mostly the same individuals.

2. Evade the Military Dimension:
As far as Tehran is concerned the military dimensions of the nuclear program have been removed as much as possible from the talks; they either have never been discussed or they have been intentionally minimized or watered down. The military sites have in principle been excluded from inspections. In exceptional cases where access has been granted, it has been fully controlled, limited, opaque and specifically designed to remove the issue from the table.

3. Only Deal with Disclosed Sites:
The negotiations and even any agreements that have been made have just involved the disclosed aspects of the nuclear program and Tehran has never showed any desire to reveal all aspects of its nuclear program.

4. Drag the IAEA:
In principle Tehran has tried to cloak the program, dodged offering essential responses to queries, created ambiguity, and left IAEA questions unanswered. If and when it has offered replies it has been when left with no other option, and even then it has only given the minimum amount possible to escape further scrutiny.

5. Keep the Entire Nuclear Infrastructure:
As far as Khamenei is concerned, every attempt must be made to preserve the nuclear program in its entirety. In particular, research and development has not ceased at any juncture.

6. Build Trust Verbally:
Where serious issues have been raised about the program the Iranian regime has offered verbal promises and attempted to gain trust by using already disclosed secrets while concurrently postponing and not responding to IAEA investigations.
7. Keeping the Talks Alive:
Resorting to and portraying an inclination for negotiations have been employed by Khamenei to prevent the international community from adopting any resolute policy vis-à-vis Iran so that the nuclear project may continue to advance under this cloak. Meanwhile, Tehran is also reluctant to find itself in a position where the talks crash since this would pave the way for the adoption of a resolute policy towards Tehran.

In addition to classified assessments obtained from the regime, the report drew heavily from the 1200-page-long memoires of Hassan Rouhani as the chief nuclear negotiator in talks with the EU3 in 2003 and 2004 as well as recent public statements by Ali Khamenei and other officials of the regime.