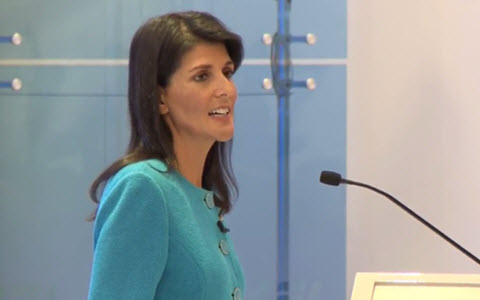 NCRI – Earlier this week, President Trump’s envoy to the United Nations discussed the possibility of not granting Iran compliance with the 2015 nuclear deal. It was suggested that the decision might end up being left to Congress.
US Ambassador to the United Nations, Nikki Haley, said that although she does not know what the President will decide to do, he would be well within reason to not certify Iran’s compliance. She said that whatever happens after that will be a big challenge for Congress.

Haley said that although it will not be easy for Congress, nor pleasant, it needs to be done. She said: “I get that Congress doesn’t want this. This is not an easy situation for Congress. But our lives are not about being easy. Our lives are about being right.”

On the election campaign, Trump was very critical of the nuclear deal and said that he would scrap it if he was elected. However, there has been a lot of pressure to keep it in place, especially from the other signatories of the deal. So, to keep both sides happy, the Trump administration is looking for a compromise. One such possibility would be to declare that Iran is in violation of the deal but keeping its relief from sanctions in place for the time being.

As it stands now, President Trump is obliged to report to Congress every 90 days regarding Iran’s compliance or non-compliance with the nuclear deal.

However, the matter is complicated even further when the International Atomic Energy Agency (IAEA) claims that the Islamic Republic is complying with the terms of the deal. The IAEA is the UN agency that is in charge of monitoring the deal and it claimed last week that Iran is still complying.

The Trump administration’s argument for noncompliance is based on the thin line between pursuing nuclear weapons and support for terrorism and extremism in the Middle East. Haley has said that Iran’s ballistic missile activities, which were excluded from the nuclear deal, are actually illegal under several UN resolutions.

Haley said that the non-nuclear argument won’t stand because “missile technology cannot be separate from pursuit of a nuclear weapon”.

The next compliance deadline is next month. Questioned about this deadline, Haley said that whatever happens, and despite pressure from other nations to stay in the deal, US national security must be taken into account and prioritised by the Trump administration.