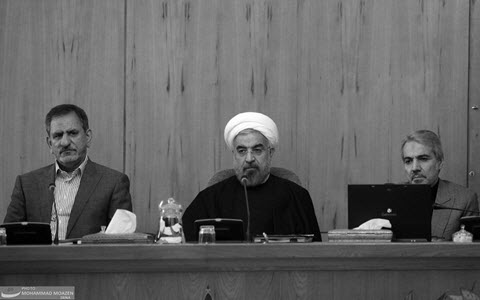 NCRI – With the US stance on the nuclear deal becoming more clear, Hassan Rouhani’s government and his band are looking to Europe for preserving the pact.

But since internal contradictions within the regime rule over its every aspect, there’s a conflict of interest, and opinions as a result, between regime’s rival bands in this regard as well.
There’s also a strong disagreement between regime’s two rival bands over Europe’s ultimate stance on the nuclear deal, with Rouhani’s media and guys counting on Europe to stand beside the regime to the end and defend its stance against the United States.

“Looking to Europeans regarding the fate of the nuclear deal, Rouhani claimed at the end of his visit to New York ‘they (Europeans) expressed their support for the nuclear deal during our meetings and said they’ve made the US aware of their viewpoints as well. Europe’s approach will hugely affect the way we will behave.” (State-run Mehr news agency, September 20, 2017)

Meanwhile, the website belonging to regime’s Journalists Club refers on September 25 to Germany’s standpoint regarding the nuclear deal and its ties with the regime, overstating so much to claim that “Merkel is Iran’s bargaining chip in the international arena.” The website then points to Germany’s future relations with the Iranian regime, saying “the role Germany played in nuclear agreement shows their great desire for having political relations with Iran.”

The state-run websites also points in another article to Europe’s reaction to US October decision regarding the nuclear deal, saying “despite Trump’s attempts to sabotage the nuclear deal by decertifying it in October, the Europeans will react independently.”

By ‘independent reaction’ to Trump’s October decision, the author of the article means that the EU will take Iranian regime’s side in its conflict with the US over the nuclear deal. “Europeans are more committed to the nuclear deal and seek to strongly support it”, says the article.

Also in this regard, Seyed-Reza Mirtaher, referred to as international affairs expert, said in his interview with regime’s Radio Goftegoo on September 19 “today, the United States and its European partners are increasingly diverging from one another, and the US withdrawal from the nuclear deal will further fuel their disagreement. Besides, Russia and China will also take different stances (from the US) in this regard. Prior to this, the P5+1 used to take a unified stance on Iran nuclear deal, but with US pulling out, we will see that the other members will stand by Iran and against the United States.”

Meanwhile, media and figures linked to regime leader Ali Khamenei have different views regarding future attitude of the EU, France in particular.

“Being pleased with European’s sticking to the nuclear deal and possible renegotiations is a strategic mistake, which on one hand serves to complete Trump’s puzzle and on the other hand drives the country toward new sanctions, desecuritization, and destabilization.” (State-run Mashreghnews, September 20, 2017)

Referring to EU, France in particular, as ‘good cop’, who has entered a psychological warfare with the ‘bad cop’ so they can force regime’s FM Javad Zarif to make new concessions in New York, state-run Resalat has warned on September 20 “as long as the government has tied its life to the nuclear deal and put faith in US and Europe’s supports, there’ll be a never-ending vicious circle of making concessions.”

State-run Rajanews website, also close to Khamenei, has also pointed to Europe’s future stance on the nuclear deal, saying “Europe will never sacrifice its economic ties with the US for its relations with Iran. Principle of investment is based on fear, meaning that the investor tends to invest in places with a guaranteed 100 percent return. While Iran has not yet resolved its disputes with the United States, the European investor will not be willing to sacrifice his major market for Iran’s small one over having dispute with the United States.” (State-run Rajanews, September 18, 2017)

Also Khamenei’s Kayhan newspaper points on September 24 to France’s attitude towards the nuclear deal, saying “the developments over the past few days at the UN confirmed Kayhan’s ’nuclear deal complementary’ report and its analysis titled ‘the dangerous game of a second nuclear deal’, and also showed France’s total cooperation with the United States in setting the stage for a nuclear deal complementary. Following Rouhani’s meeting with French president, world news agencies, including Reuters, reported that Emmanuel Macron has suggested the Iranian president a new round of nuclear talks, warning Rouhani that Tehran must stop provoking the United States in the region.”

The question, however, is “what’s the reason behind inconsistent, and confused of course, viewpoints of regime’s media and officials regarding the nuclear deal?”

Regime’s confusion stems from the reality of a failed nuclear deal and the way the poisoned chalice works.

Regime was assuming that with taking the poisoned chalice of a nuclear deal, it will be rewarded with any kind of concessions made by both Europe and the United States. Not only did it not happen, but the regime is now caught in a predicament for which there are few options available.

Either the regime should accede to more nuclear deal like pacts, which is quite dangerous, or it should withdraw from the nuclear deal, which in turn will lead to undesirable consequences.

So, the nuclear deal has now turned into a pressure lever for squeezing regime’s throat. Moreover, with increasing new non-nuclear sanctions, such as those related to regime’s missile program or human rights violations, put in place every few months, the regime will be put under more pressure, both economically and politically.