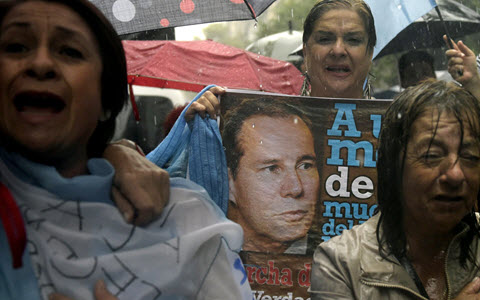 NCRI – During his United Nations General Assembly speech last week, President Trump had many criticisms about the extremism that is being seen across the world. He mentioned, in particular, Islamist extremism and radical Islamic terrorism – both pretexts for a supremacist ideology and the mass-murder of Jews, Christians, Hindus, Yazidis and Muslims.

He also mentioned that another big issue is the international criminal networks that pose a great threat. Trump said that this involved the trafficking of weapons, drugs and even people.

Trump spoke about these problems as issues that need to be dealt with, and it may be surprising to some to know that they are more related that one would think.

Because of his role in international drug trafficking, the U.S. Treasury Department sanctioned him and approximately $3 billion worth of assets were frozen.

It was found out that El Aissami had handed out several hundred Venezuelan passports to Hezbollah operatives, Iran’s main proxy group, and also to members of Iran’s Islamic Revolutionary Guard Corps (IRGC).

The Iranian regime has been terrorising the Middle East for many years now and it seems like it has expanded further afield now. It has been trying for a long time to get into Latin America and over the years it has been recruiting agents and allies in Lebanese Shia communities. To do this, it has been setting up education and cultural centres, mosques, media outlets, and so on. It has also sent missionaries to convert people who would be selected for indoctrination and eventually training in Iran.

The Iranian regime was behind numerous attacks in South America resulting in a high number of casualties and fatalities. There was the bombing at the Israeli embassy in Buenos Aires in 1992 and the bombing of the Jewish cultural association, AIMA, in 1994.

Alberto Nisman, a prosecutor in Argentina, spent many years of his life investigating the incidents and he had compiled an indictment of more than 500 pages showing that Iran was setting up terrorist networks all across the world. He was able to show that many senior Iranian officials are actively involved, including Iran’s cultural attaché in Argentina.

Nisman had also established a link with Cristina Fernandez de Kirchner who was the country’s president at that time. She was involved in a plan that would help and exonerate Iranian suspects, illegally, for their part in the attacks.

Nisman was murdered just hours before he was due to present the evidence he found.

Thankfully he is not the only one that was looking into Iran’s attempts to penetrate South America.
Hezbollah is a vital part of Iran’s regional and international activities and it is involved in all sorts of trafficking, and as usual, does the dirty work for Iran.
So to those that say that Iran needs to be curbed in the Middle East, lets add South America to the list.