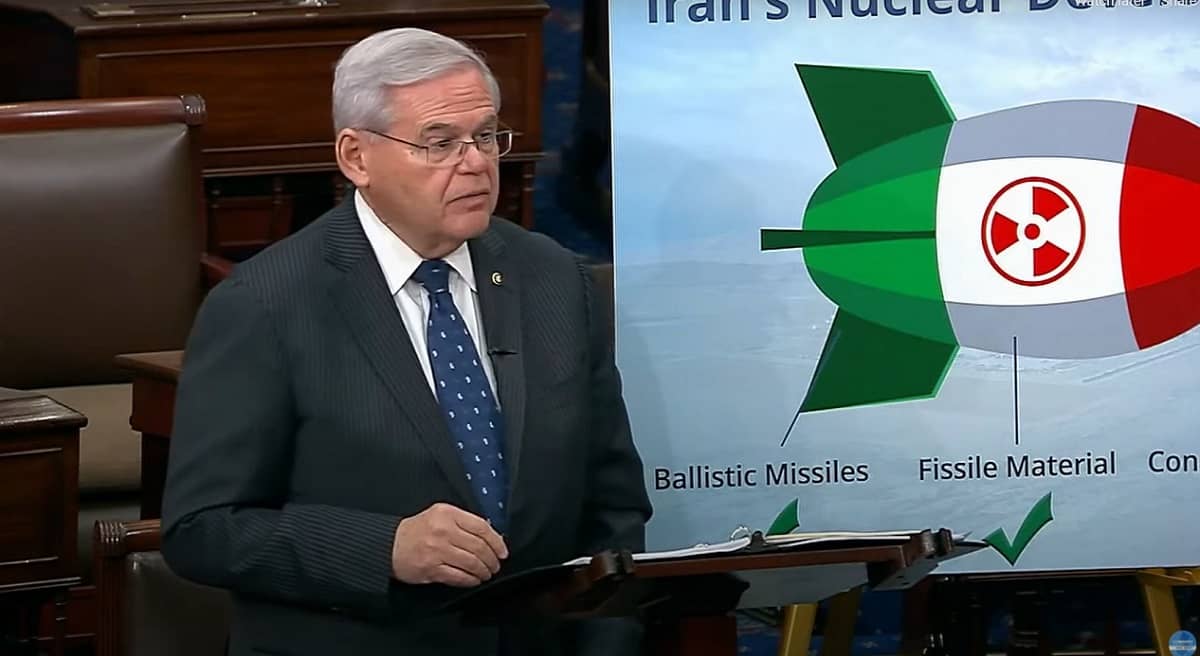 On Tuesday, February 1, U.S. Senator Bob Menendez (D-N.J.), Chairman of the Senate Foreign Relations Committee, took to the Senate Floor to deliver remarks to lay out his growing concerns with the Biden administration’s latest round of negotiations over the Joint Comprehensive Plan of Action (JCPOA) while the Iranian regime continues to rapidly advance its nuclear program, its ballistic missile program and the proxy warmongering in the Middle East.

“As someone who has followed Iran’s nuclear ambition for the better part of three decades, I am here today to raise concerns about the current round of negotiations over the Joint Comprehensive Plan of Action, and Iran’s dangerously and rapidly escalating nuclear program that has put it on the brink of having enough material for a nuclear weapon,” said Chairman Menendez.

“Upon taking office, the Raisi government abandoned all previous understandings and, as I mentioned, made absolutely clear that Iran’s ballistic missiles and regional proxy networks are ‘not negotiable.’ Moreover, at this point, we seriously have to ask what exactly we are trying to salvage?” the US senator questioned.

“First and foremost, my overarching concern with the JCPOA was that it did not require the complete dismantlement of Iran’s nuclear infrastructure,” Chairman Menendez continued: “Instead, it mothballed that infrastructure for 10 years, making it all too easy for Iran to resume its illicit nuclear program at a moment of its choosing. The deal did not require Iran to destroy or fully decommission a single uranium enrichment centrifuge. In fact, over half of Iran’s operating centrifuges at the time, we’re able to continue spinning at its Natanz facility… Today, Iran has more fissile materials – 2500kg, more advanced centrifuges, and a shorter breakout time – three to four weeks – than it had in 2015.”

Chairman Menendez underscored that over two decades, the Iranian regime had pursued all three elements necessary to create and to deliver a nuclear weapon, namely the fissile material that now indicates the threshold time is three to four weeks away, the scientific research and development to build a nuclear warhead, and the ballistic missiles to deliver them.

Citing the latest rocket and drone attacks against the US troops in the Middle East, Menendez said: “I remain highly skeptical it will suspend any of its other threatening and destabilizing activities, from ballistic missile development to support for terrorist proxies. Even as the United States, our P5+1 partners, and Iran convened in Vienna for indirect negotiations about returning to the JCPOA, Iran’s leaders took it upon themselves to antagonize all parties and show – in my view – their true intentions.”

Chairman Menendez called on the Biden administration and the P5+1 to consider new strategies for rolling back Tehran’s nuclear program and addressing its dangerous and nefarious activities as follows:

“Also, important would be to provide both local allies and partners as well as U.S. installations and assets in the region with enhanced defensive capabilities to counter whatever retaliatory actions Iran might choose to make, thereby signaling our readiness to act, if necessary,” Menendez added:

The senior Senator concluded by saying: “Today I call on the Biden administration and the international community to vigorously and rigorously enforce sanctions, which have proven to be among of our most potent tools for impacting Iran’s leaders and the IRGC. We cannot allow Iran to threaten us into a bad deal or an interim agreement that allows it to continue to build its nuclear capacity… Hope is part of human nature, but unfortunately, it is not a national security strategy… We must welcome legitimate and verifiably peaceful uses of nuclear power but remain true to our nonproliferation principles and our unyielding desire to build a more stable, safer, prosperous world for the American people and all peace-loving people to thrive. In order to do so, Iran cannot and must not possess a nuclear weapon.”