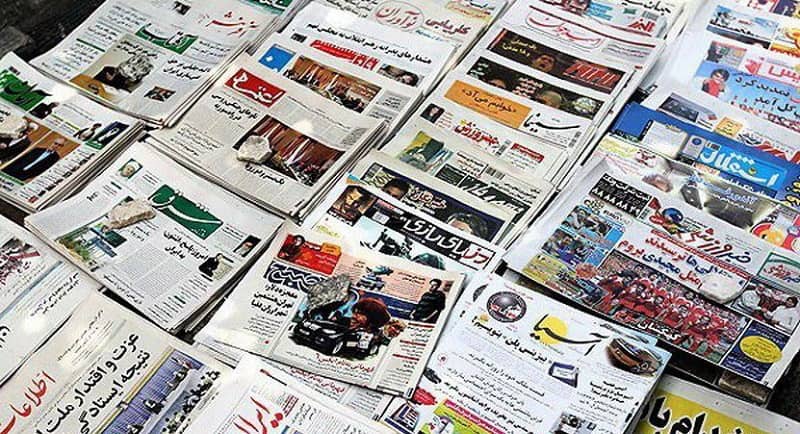 As the Iranian regime’s infightings continue to grow regarding their foreign policy, the regime’s state-run media acknowledges the role of the Iranian opposition, the People’s Mojahedin Organization of Iran (PMOI/MEK), in mobilizing the Iranian society and international community against the clerical regime.

The regime’s factions now warn one another of a “common enemy,” which is determined to overthrow Iran’s genocidal regime.

The MEK played a vital role in exposing the regime’s secret nuclear program and mullahs’ desire to obtain nuclear weapons.

“While they consider the government’s policy as the real reason for the intensifying sanctions, they forget to acknowledge the root of all these lies in the MEK’s activities, when one of their officials accused the system of building a nuclear weapon in the 1990s,” wrote the state-run Mardom Salari daily in its editorial on Sunday.

“It was the MEK who used the nuclear program to create an international political riot, which resulted in six consecutive resolutions by the United Nations Security Council. The [rival faction members] seemingly do not know that it was the MEK that helped impose severe sanctions on the Islamic Republic by providing false information about Natanz and Arak nuclear facilities in August 2002. It was [the MEK’s revelations] which turned international ‘breeze’ into a ‘tornado’ of megaton of sanctions,” Mardom Salari added.

The regime has tried to obtain nuclear weapons to prolong its grasp on power. Officials concealed their nuclear activities for nearly two decades. The first significant challenge to that concealment came from the MEK when intelligence reports from the group revealed the Natanz uranium enrichment site and the Arak heavy water facility. Subsequent revelations unveiled the extent to which the regime’s clandestine nuclear weapons work had advanced, and this triggered inspections by the International Atomic Energy Agency (IAEA).

Over three decades, the MEK has made more than one hundred revelations of secret sites, projects, procurements, and key figures involved in the regime’s nuclear program, often in the face of incredulity and annoyance by the world powers seeking accommodation with the regime. However, that doubt has generally vanished as evidence emerged to corroborate the Resistance’s warnings.

The Iranian Resistance is proud of having contributed to this outcome. It remains committed to the historic task of preventing an aggressive, virulently sectarian, and repression theocracy from developing weapons of mass destruction and using them to threaten people, the surrounding region, and the world.

The world leaders signed a nuclear deal with the regime in 2015, formally known as the Joint Comprehensive Plan of Action (JCPOA). Tehran received enough financial resources by signing this agreement to continue its illicit activities and used the JCPOA’s loopholes to continue its nuclear program.

“It was the MEK that published a book in October 2017, known as ‘Iran’s Nuclear Core,” claiming that despite the JCPOA the [regime] is advancing its nuclear agreement, thus increasing international banking and oil sanctions on the system,” wrote Mardom Salari in this regard.

Parallel to its international activities, the MEK has posed a serious threat to the regime’s grip on power by its activities inside Iran. The MEK’s Resistance Units played a significant role in leading the restive society in its quest for regime change and freedom, showing the international community that the mullahs have no base of support inside Iran.

“It was the MEK with its ‘Resistance Units’ strategy that triggered the incidents of January 2018, spreading street riots across the country. As [the regime’s president Hassan] Rouhani said, Trump withdrew from the JCPOA after [what happened inside Iran.]” Mardom Salari wrote.

“Those [members of rival faction] who consider themselves the heirs of the revolution’s legacy should look at today’s events, at how the MEK and the enemy use every issue to trigger protests in the country. They should expose [the MEK’s] activities instead of targeting the government,” Mardom Salari warned.

Mardom Salari underlined how the MEK and the Iranian Resistance held “hundreds of conferences between 2002 and 2019” worldwide, exposing the regime’s terrorist activities.

Mardom Salarie’s article once again confirms the regime’s fear of its organized opposition. The regime confirmed this fear when in 2018 it used its diplomat-terrorist Assadollah Assadi to plant a bomb in the opposition rally in Paris. Assadi and his accomplices were arrested, and the bomb plot was foiled, and their verdict will be announced on February 4.

Despite the regime’s demonizing campaign, the mullahs’ action confirms that the MEK and the National Council of Resistance of Iran (NCRI) are the only viable alternative to Tehran’s genocidal regime. The Iranian Resistance has been proud of its efforts aimed at overthrowing the regime and has pledged to continue this struggle until it topples this medieval regime.