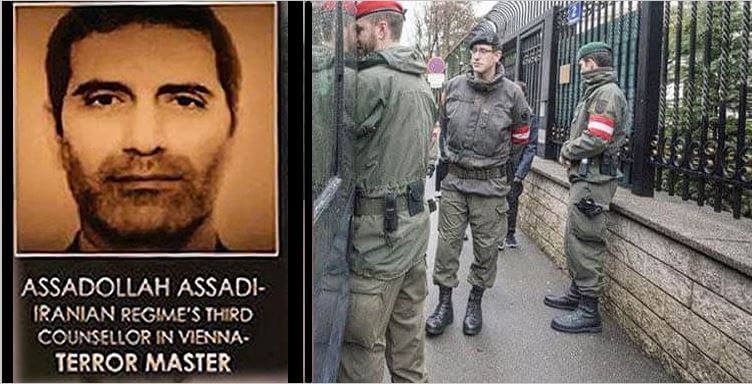 Days before a court in Antwerp, Belgium is to announce its verdict about Iran’s incarcerated diplomat-terrorist Assadollah Assadi on February 4, the regime’s Ministry of Foreign Affairs resorts to conspiracy theory and insisted on Assadi’s so-called “diplomatic immunity” and expressed the mullahs’ fear of Assadi’s highly possible condemnation.

“This is a complicated trap set up using the MEK [People’s Mojahedin Organization of Iran] for this Iranian diplomat,” said Saied Khatibzadeh, Foreign Ministry’s spokesperson on Sunday.

European authorities arrested Assadi along with three of his accomplices while they attempted to bomb the Iranian opposition rally in Paris of June 2018. Prior to his arrest, Assadi served as the third secretary at Iran’s embassy in Austria.

Khatibzadeh confirmed the regime’s fear of Assadi’s trial, saying “it could set a dangerous precedent.”

Based on the evidence and the prosecutors’ indictment, Assadi had transferred 500 grams of highly explosive TATP to Europe on a passenger jet. He avoided security check using his diplomatic passport. Assadi handed over the explosives to Nasimeh Na’ami and Amir Saadouni and tasked the couple to plant to bomb “as close as possible” to Mrs. Maryam Rajavi, the Iranian opposition president.

Khatibzadeh, spokesperson for the world’s top executioner per capita, complained about Assadi being “jailed in inhumane conditions.”

Khatibzadeh speaks of Assadi’s being deprived of lawyer, while the regime he represents, has extrajudicially executed thousands of dissidents. The regime’s Judiciary Chief, Ebrahim Raisi, and Justice Minister Alireza Avaii played a key role in the 1988 massacre of over 30,000 political prisoners.

Khatibzadeh claimed Assadi has diplomatic immunity and deprived of his “rights,” while he was attempting to commit mass murder in Europe.

During Assadi’s trial on November 27 and December 3, the prosecutors presented much evidence, found in Assadi’s car, including a notebook with codes for the operation, confirming his role as the commander of this terrorist plot.

The “wealth of evidence” found at the homes of Na’ami, Saadouni and Mehrdad Arefani, another of Assadi’s accomplices, suggested they were on the regime’s payroll and in systematic and constant contact with Assadi.

Saadouni and his wife Na’ami started their cooperation with Iran’s Ministry of Intelligence and Security (MOIS) in mid 2000s.

According to the prosecutors’ indictment, the terrorist couple began communicating with Assadi in 2015, who they knew as “Daniel.” Until their arrest in 2018, Saadouni and his wife were in constant contact with Assadi and traveled to Iran several times. The terrorist couple and Arefani received money from the regime.

Despite their diplomat-terrorist being caught red-handed, the regime’s officials have been complaining of Assadi’s so-called “diplomatic immunity” being violated.

The regime’s Ministry of Foreign Affairs, directed by the mullahs’ chief apologist, Mohammad Javad Zarif, has not only facilitated the bomb plot by providing diplomatic cover to Assadi, but has ever since tried to whitewash his crime. Zarif, despite his knowledge of the 2018 terror plot and his role in it, was the first person to call this obvious terrorist attack a “false flag operation.”

In other words, Khatibzadeh is Zarif’s spokesperson, confirming the role of the entire ministry in the 2018 terror plot.

Zarif and his ministry, along with Assadi and his lawyer have questioned the Belgium’s authority to convict or even keep Assadi in custody. Assadi has even refused to appear in the court.

According to the prosecutors’ indictment, Austria, where Assadi’s diplomatic mission is located, cannot object to his arrest because he was apprehended outside of Austria and according to international law, he did not have diplomatic immunity.

This is due to Assadi’s intention to commit mass murder; therefore, international law allows Belgian authorities to strip Assadi of his diplomatic immunity and arrest him.

While the entire diplomatic-terrorist apparatus, and mainly its chief Javad Zarif, have “diplomatic immunity,” Assadi will insist on enjoying the same immunity as his boss does, although he was arrested while trying to bomb a gathering.

The regime has used its so-called “diplomatic privileges” across Europe to pursue its malign goals. The Iranian regime’s embassies, like the one in Austria where Assadi was stationed, are centers of espionage and terrorism.

Today, the European Union’s Foreign Ministers hold their meeting. Assadi’s case and his trial is a momentum which they could use to put an end to the Iranian regime’s unbridled terrorism in Europe.

The EU leaders should shut down the regime’s embassies throughout Europe and expel the mullahs’ agents. Zarif, along with other regime officials should be blacklisted for their role in terrorism.

Adopting such a firm policy will certainly set a precedent and prevent the regime from spreading more chaos across the globe.