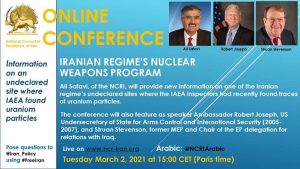 In an online conference on March 2, 15:00 Central European Time (14:00 London, 9:00 am, Washington, DC), the National Council of Resistance of Iran (NCRI) will provide new information on one of the Iranian regime’s undeclared sites where the International Atomic Energy Organization (IAEA) inspectors had recently found traces of uranium particles.

The new information, provided by the sources of the network of the People’s Mojahedin Organization of Iran (PMOI/MEK) inside Iran, includes details on the role and function of the site in Tehran’s nuclear weapons program, the experts involved at the time, and their current activities.

The conference will also feature as a speaker Ambassador Robert Joseph, US Undersecretary of State for Arms Control and International Security (2005-2007) and Special Assistant to the President and Senior Director of Proliferation Strategy, Counterproliferation and Homeland Defense in the National Security Council (2001-2005).

Another speaker of the conference, Struan Stevenson is the Coordinator of the Campaign for Iran Change (CiC). He was a member of the European Parliament representing Scotland (1999-2014), president of the Parliament’s Delegation for Relations with Iraq (2009-14), and chairman of the Friends of a Free Iran Intergroup (2004-14). He is an international lecturer on the Middle East and is also president of the European Iraqi Freedom Association (EIFA).

The speakers will put forth the necessary steps which the international community has to take in dealing with the clerical regime’s nuclear weapons program.

In its latest Iran NPT safeguard report issued on February 23, 2021, the IAEA wrote that it detected “anthropogenic uranium particles” at two undeclared sites in Iran. Iran has not provided credible technical explanations to the agency to account for the presence of the particles.”