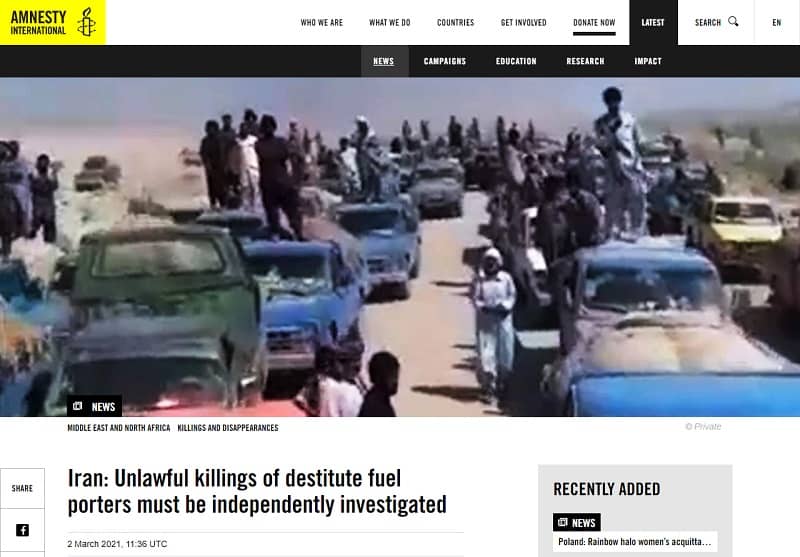 Iran’s Revolutionary Guards unlawfully used lethal force against unarmed fuel porters near the city of Saravan, in Sistan and Baluchestan province, on 22 February, flagrantly violating the absolute prohibition on the arbitrary deprivation of the right to life under international law, said Amnesty International today.

Testimony from eyewitnesses and victims’ families, coupled with video footage geolocated and verified by the organization’s Crisis Evidence Lab, confirms that on that day, Revolutionary Guards, stationed at Shamsar military base, used live ammunition against a group of unarmed fuel porters from Iran’s impoverished Baluchi minority causing several deaths and injuries.

On Tuesday, a group of contract teachers held a rally in front of the Ministry of Education’s main building in Tehran, protesting the non-implementation of the Employment Law and demanded elimination of corrective examinations.

Gathering in memory of Behnam Mahjoubi

Family members and relatives of slain political prisoners Behnam Mahjoubi held a reunion at his grave in Kerman, southeast Iran, seven days after his death. 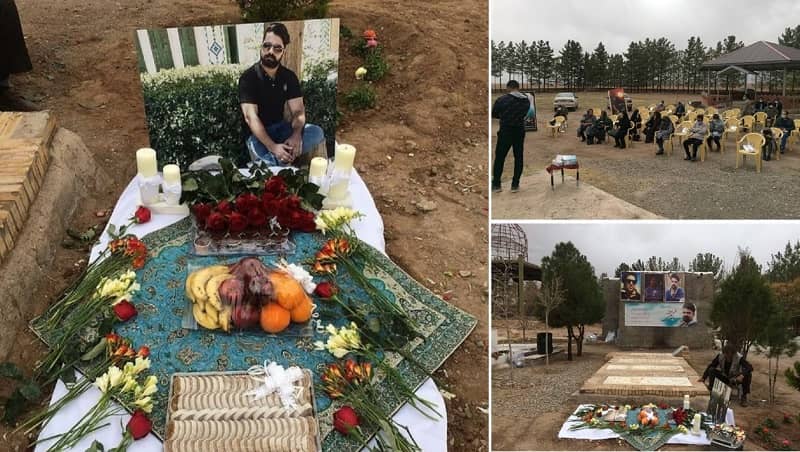 A group of civil activists in Tehran also gathered on the same occasion and sang a hymn to commemorate Behnam.

Maryam Rajavi: Silence and inaction with regards to ongoing executions in Iran encourage mullahs to continue their crimes against humanity

“Silence and inaction with regards to the ongoing executions in Iran encourage the mullahs to continue their four decades of crimes against humanity. It is imperative that an international mission visits Iranian prisons and meet with prisoners,” she added.

Silence and inaction with regards to the ongoing executions in #Iran encourage the mullahs to continue their 4 decades of crimes against humanity. It is imperative that an international mission visits Iranian prisons and meet with prisoners. #FreePoliticalPrisoners 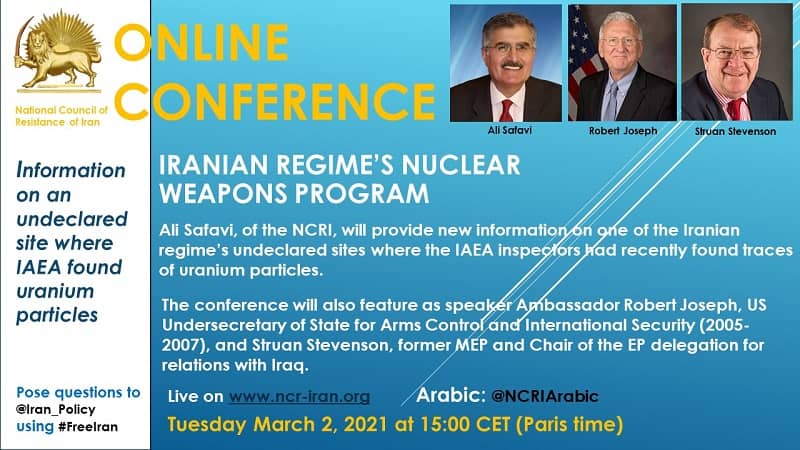 In an online conference on March 2, 15:00 Central European Time (14:00 London, 9:00 am, Washington, DC), the National Council of Resistance of Iran (NCRI) will provide new information on one of the Iranian regime’s undeclared sites where the International Atomic Energy Organization (IAEA) inspectors had recently found traces of uranium particles.
The new information, provided by the sources of the network of the People’s Mojahedin Organization of Iran (PMOI/MEK) inside Iran, includes details on the role and function of the site in Tehran’s nuclear weapons program, the experts involved at the time, and their current activities. 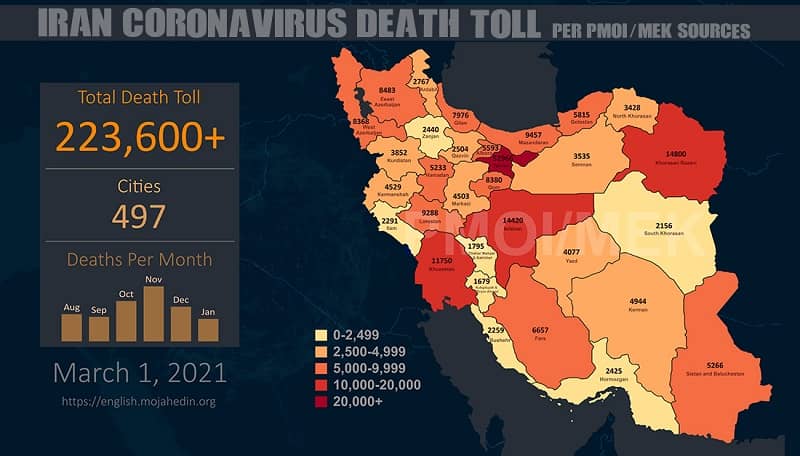 More than 223,600 people have died of the novel #coronavirus in 497 cities checkered across all of Iran's 31 provinces, according to the Iranian opposition PMOI/MEK.

Ahvaz Intelligence Ministry agents contacted the families, instructing them to the Ahvaz’s Chaharshir Square. Intelligence agents blindfolded the families and transferred them to Sepidar Prison, where they visited their loved ones for half an hour. 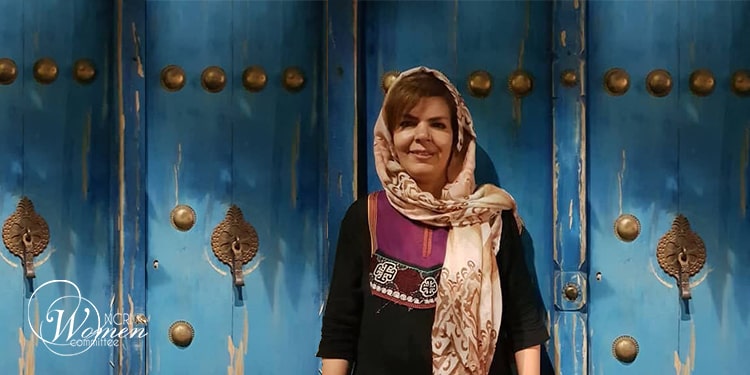 Latest reports indicate that Kachouii Prison authorities have refused to grant medical leave to Monireh Arabshahi who is suffering from thyroid malfunction and needs to be operated.

In mid-December, when Mrs. Arabshahi had a swollen throat and had difficulty breathing, doctors said that she needed to be urgently tested.

Sunday saw another day of protests in Iran’s Sistan and Baluchestan province. The protests began on Monday, after the Revolutionary Guards (IRGC) opened fire and killed fuel porters in Saravan county, near the Iran-Pakistan border. Dozens of the impoverished fuel porters were killed and injured in the incident. Images and videos posted on social media showed dense presence of IRGC forces along with heavy artillery and tanks.

The Iranian Resistance Units, the network of the Iranian opposition inside Iran, organized vast activities in solidarity with the protests in Saravan.

The unsolvable crisis between Iran’s people and regime 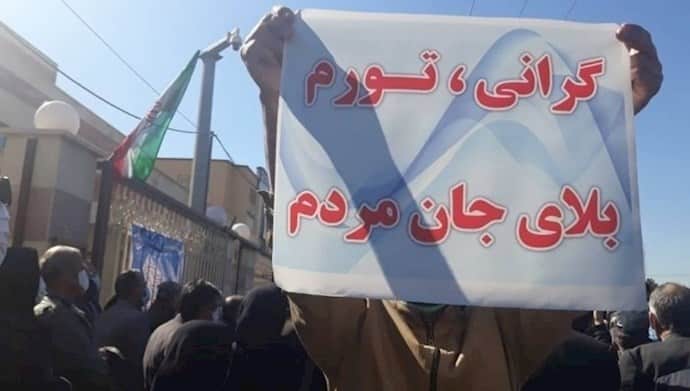 On February 28, retirees, pensioners, and welfare recipients held rallies in more than a dozen cities across Iran for the fourth time in February. Protesters blamed the government for inaction regarding their dire living conditions and low pensions.

They vented their anger over the regime’s indifference about their dilemmas. In recent years, given the regime’s mismanagement and systematic corruption, many families are now living in poverty and dire circumstances.

Iranians Continue Protests; at Least 30 Rallies and Strikes on February 28

On Sunday, February 28, citizens in Iran held at least 30 rallies and protests, blaming officials’ failure to meet their inherent demands. Furthermore, Iranian Baluch citizens continued their protests for the seventh day in a row, which received warm support from the people inside the country and abroad.

On the other hand, pensioners and retirees held rallies and marches in 26 cities across the country, blaming officials for failing to keep their promises.

Furthermore, teachers, workers, and landowners staged three other protests in Tehran and Razavi Khorasan provinces. They blamed the regime’s plundering and profiteering policies, which looted people’s meager properties and led them to poverty and misery.