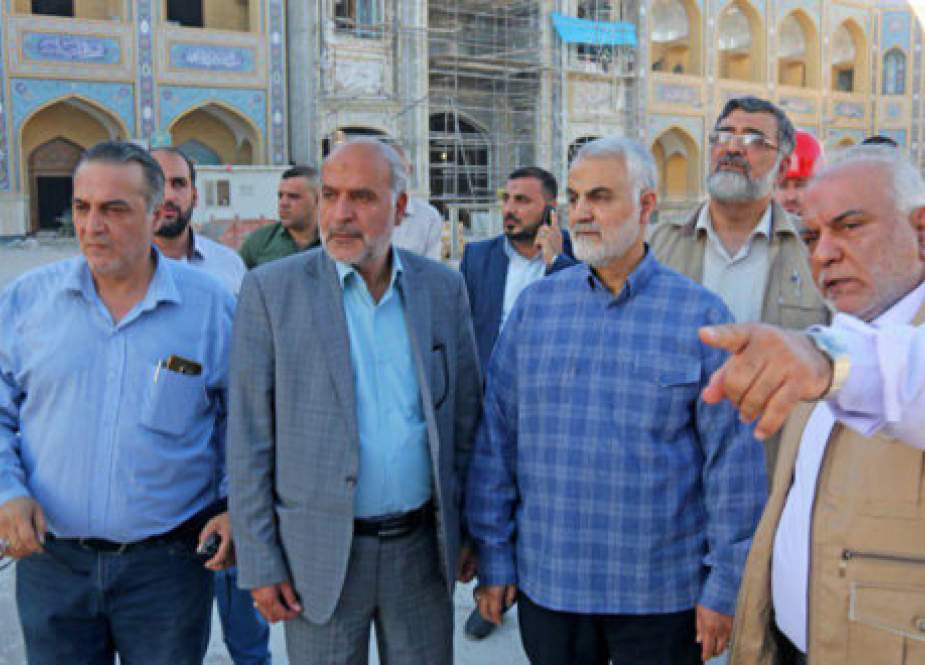 The mullahs’ regime uses humanitarian or charity organizations and institutions, in addition to its official organizations such as embassies and consulates, as a cover for the terrorist Quds Force to intervene in neighboring countries. The mullahs have systematically used these organizations to secretly occupy Iraq in particular.

The Islamic Revolutionary Guards Corps (IRGC) has institutionalized its presence in Iraq through the “Holy Shrines’ Reconstruction Headquarters,” which ostensibly works to reconstruct the shrines of historical Shiite leaders in Iran, Iraq and Syria. The most important such shrines in Iraq are particularly exploited by the organization during the important religious ceremonies of “Ashura” and “Arbaeen.” The Reconstruction Headquarters is one of many cover organizations that are used to advance the IRGC Quds Force’s objective in Iraq and elsewhere.
Major General Qassem Soleimani, commander of the terrorist Quds Force, appoints or dismisses the senior managers of the Reconstruction Headquarters, and many key officials of this “non-profit” institution are IRGC commanders.
The institution is said to have three thousand Iranians working on its projects in Iraq.
The entity has lately focused more extensively on using Iraq to circumvent sanctions against the mullahs’ regime.
This Quds Force-affiliated organization is active in Iraqi cities such as Najaf, Karbala, Kazemein, Koufah, Samarra, Mosaib and Shahr-ol Balad of Samera’s neighborhoods. It also began operations in Syria in 2014 and now has an independent office in Syria which is active under the pretext of reconstruction of holy shrines. The Holy Shrines’ Reconstruction Headquarters has created a good cover for the Quds Force’s presence in Syria in the post-war period.
The organization currently plans to exploit the Arbaeen religious ceremonies on Friday, October 18, one of the most important Shiite events, with millions of participants. 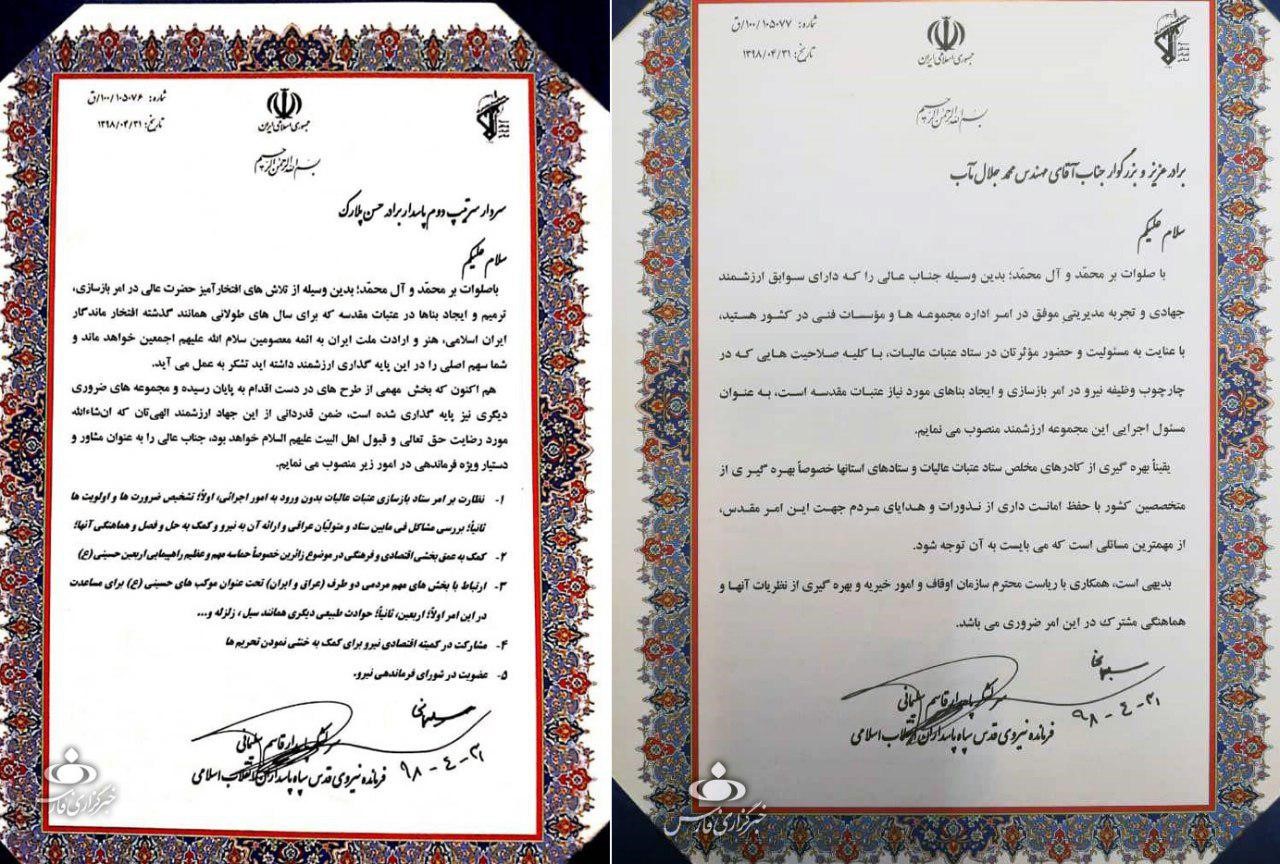 Since you have finished an important part of the plans you had in hand, and other crucial complexes are established, while expressing my gratitude for your valuable Jihadi work that may God and Ahl-ol Beyt [family of the prophet of Islam, particularly the Shiite leaders] accept it, I appoint you as the special adviser of the Quds Force’ commanding office on following issues.

In addition to Qassem Soleimani, the office of the Supreme Leader has great influence in the Holy Shrines’ Reconstruction Headquarters.

Hassan Polarak and Mohammad Jalal Mab are both from Kerman like Qassem Soleimani and they are his old acquaintances. Hassan Polarak has been a member of the IRGC since its foundation. He participated in the massacre of the Kurdish-Iranian people in 1980s, and during the Iran-Iraq war served in Thar-Allah 41 brigade under Qassem Soleimani’s command.

Polarak has numerous private companies and is very active in plundering the people of Iran. He also served as the Iraq economic consultant of Eshaq Jahangiri, the regime’s vice president, from January 2016 to November 2016.

Mohammad Jalal Mab, Soleimani’s old acquaintance, was the Mayor of the Iranian city of Kerman from 2003 to 2007. 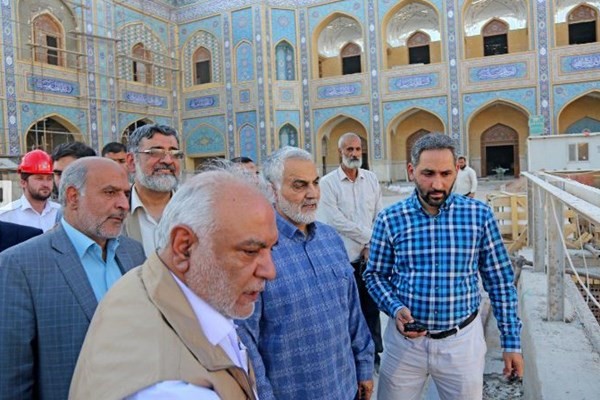 The website of the Holy Shrines’ Reconstruction Headquarters in Iraq introduces this organization as follows: “The Headquarters of Reconstruction of Holy Shrines and supporting Iraq, was founded in 2001. The type of its activities are non-governmental, voluntary and non-profit, operates internationally and its period of activity is limitless from the foundation date. Its headquarters is in Tehran. The subject of the organization’s activity is the reconstruction of the holy shrines and religious places in Iraq and other countries, and offering scientific, cultural, educational, sanitation, renovation and humanitarian activities.”

In an interview on January 25, 2016, Hassan Polarak explained the process of forming this organization and entering Iraq, which was simultaneous with the US-led invasion of Iraq in March 2003. Polarak said, “The Americans attacked Iraq to eliminate Saddam, of course; the Islamic Republic’s goal was also eliminating Saddam. So we used the opportunity and with the potential we had we entered Iraq and we started the reconstruction of the holy shrines. A few months after the fall of Saddam, the popular Iraqi forces, Badr Brigade, the Supreme Islamic Council, Seyed-ol-Shohada forces and Hezb-ol- Dawa, which had their bases in Iran, took control of the scene.”

The Holy Shrines’ reconstruction Headquarters has been a cover and pretext for the widespread presence of the Quds Force in Iraq, operating on plans of the IRGC since 2001, right after the fall of the previous Iraqi government. Within the last 16 years, under this pretext, the terrorist Quds Force has been able to import weapons and bombs into Iraq and transfer forces between Iran and Iraq. As Qassem Soleimani ordered Hassan Polarak, the IRGC, under the pretext of economic activities of the Headquarters, uses Iraq to circumvent international sanctions against the regime.

On the other hand, the mullahs’ regime, abusing religious beliefs of the Iranian and Iraqi people, has plundered the popular aid for reconstruction of the holy shrines. For example, the regime has earned a high income selling “holy” goods from Shiite leaders’ tombs in Iran at high prices and reconstructing parts of shrines and doors of these tombs in Iran and sending them to Iraq. In addition, the IRGC has created a massive economic project for the Khatam-ol-Anbia bases and other economic organizations of the IRGC under the pretext of reconstruction of Shiite leaders’ shrines and has profited billions of dollars for its warmongering and terrorist plans.

The mullahs’ regime and the IRGC largely abuse the Arbaeen ceremony to promote fundamentalism and terrorism and triggering religious differences under the pretext of paying tribute to the Shiite leaders.

In an interview in 2019, Hassan Polarak, with the title of “the chair of the popular solidarity, housing and feeding of Imam Hussain’s Arbaeen,” exposed his and the regime’s role in this ceremony. This is also visible in his appointment decree by Soleimani.

One of the mullahs’ regime front organizations, through, which has secretly occupied Iraq, is the “Holy Shrines’ Reconstruction Headquarters” which is in fact an organization of Terrorist Quds Force. This headquarters has prepared the ground for the Quds Force to carry on different terrorist activities and arms trafficking, plundering and even circumventing sanctions under the pretext of reconstructing the shrines of Shiite figures and imams.

What makes this matter more important is the series of peaceful protests by the Iraqi people in the past weeks against corruption, poor living condition, unemployment, poverty, and Iran’s presence in their country. In these protests, which were mostly in Baghdad and the southern, Shiite zone of Iraq, the call to expel the Iranian regime from this country was a constant in protestors’ slogans, sending a strong message to the mullahs’ regime.

Interference in regional countries and exportation of Islamic radicalism and terrorism is one of the regime’s pillars, or as they call it, their strategic depth. The regime’s highest officials, including Khamenei himself, have repeatedly stated that if they don’t fight in Samarra and Syria and if they don’t draw the line there, they would have to do so in Tehran, Shiraz and Isfahan. Now they see that their “line” is about to be erased in Iraq.

For this reason, the mullah’s regime officials repeatedly called this popular movement a “conspiracy” and the supreme leader himself wrote on twitter that the goal of these protests was “creating division between the Iranian and Iraqi people.”  This explanation shows the regime’s terror over the direction of these protests and their opposition to interference by the regime and its proxies in Iraq. In this regard, the regime’s officials have incessantly highlighted the point that the protests’ objective is to impact the regime’s hypocritical annual show in Iraq at Arbaeen. For this reason, this year’s Arbaeen ceremony is highly valuable to Tehran, which has invested so much in it.

The Iranian regime is facing unresolvable economic and social crises inside Iran, which high ranking officials have called unprecedented. As such, it has resorted to more warmongering and creating chaos in the Middle East. Therefore, it has become more crucial to cut the hands of the regime, especially the IRGC and Quds Force, from other countries of the region.

Mark Williams: Relationship With Iran Should Be Contingent on Guarantees That Mullahs’ Terrorism Will Cease

“We must remind Iran that any relationship with that country is contingent on guarantees that terrorism will cease,” said Mark Williams, a former Member...
Read more
Iran News Now

On Thursday, a Belgian federal court held the second session of a terrorism trial involving an Iranian diplomat and three accomplices. The diplomat, Assadollah...
Read more