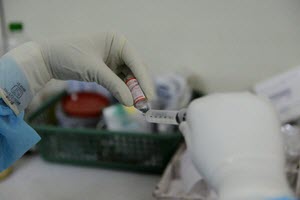 A swine flu outbreak in Iran has killed 112 people since mid-November and the country’s first medical worker has died of the virus, state media said on Monday.

“About 1,190 people have been diagnosed with the (H1N1) virus and hospitalized” and “the death toll has reached 112”, the state news agency IRNA quoted Mohammad Mehdi Gouya, an official in the regime’s health ministry, as saying.

Swine flu deaths have mostly been in southeastern Iran, while many other provinces across the country have reported isolated fatalities, the French news agency AFP reported on Monday.

A nurse died Sunday after contracting the flu from patients at a hospital in the northeastern town of Neyshabour, the state-run Mehr news agency reported Monday.

A major H1N1 outbreak sparked a World Health Organization pandemic alert in June 2009, after the virus emerged from Mexico and the United States.