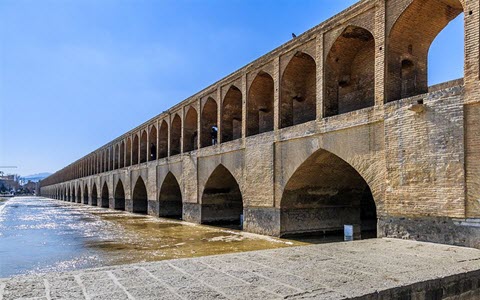 NCRI – Zayandehrood river flow stopped and the river bed dried out. According to reports, Iranian regime’s officials again decreased the output flow of Zayandehrood dam on June 10, 2017, without any explanation and this river’s bed dried out in the city of Isfahan.

After much pressures from people of Isfahan, during the regime’s sham election, the regime’s officials increase the output flow of Zayandehrood dam on March 30, 2017, and water was flowing in its bed.

Drying out of this river and other similar ones that are called as water crisis in Iran, all are the results of predatory and plunder policies of government institutions.

This situation is the direct results of wasteful construction methods of dam structures and digging deep wells to bring vast areas of lands under cultivation by government institutions such as IRGC, or changing course of the rivers to bring water to factories owned by the same institutions. This is exactly the same situation that regime is calling them as security threats for their system nowadays, which is nothing else other than, extreme anger of fed up people with such policies, which regime is confessing to their presence.