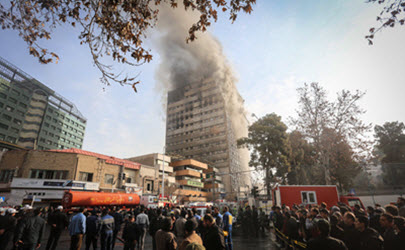 NCRI – “There are 256 tower blocks in Tehran, of which no information is available in Tehran municipality. If for any reason, something similar to Plasco incident happens for any of them, it will turn into yet another disaster”, says Pirooz Hanachi, Secretary of Iran High Council of Urban Development & Architecture.

According to state-run ISNA news agency, Hanachi said on Wednesday February 8 that “a final report is being compiled which shows there’s no information on the conditions of this number of tower blocks in Tehran.”

“The 256 tower blocks are generally located in northern parts of Tehran on narrow passages, so that it would be too difficult to carry out aid operations with available facilities”, said Hanachi.

In an interview with state-run ISNA news agency on Wednesday February 8, Masjed Jamei said that “if the incident which took place about three years ago in Jomhouri street was followed up, we wouldn’t have witness such a loss today.”

As a wholesale clothing center, Tehran’s iconic Plasco building caught fire on January 19, 2017. It collapsed a few hours later in front of stunned people while being captured by correspondents. At least 16 firefighters as well as four citizens were killed in the event, with a number of others disappeared.

The warning by the Secretary of Iran High Council of Urban Development & Architecture as well as other officials over the possibility of occurring similar incidents such as Plasco’s for dozens of other tower blocks in Tehran is stated at a time when experts are warning for years over a disaster which could happen following a possible earthquake in Tehran.