Since the Coronavirus outbreak in Iran, the clerical regime, instead of taking preventive and necessary measures, has resorted to more secrecy, which has resulted in over 1200 deaths and turning Iran into the epicenter of COVID-19

The fast Coronavirus outbreak in Iran and its transmission to other countries around the world is the result of the regime’s weeks-long cover-up, lies, and misleading information fed to the public.

While all other countries prevented any flight from or to China, according to the flighttrader24, an online flight tracker platform, flights from Iran to China, by the Mahanair airline continues. Mahanair belongs to the regime’s Revolutionary Guards (IRGC). 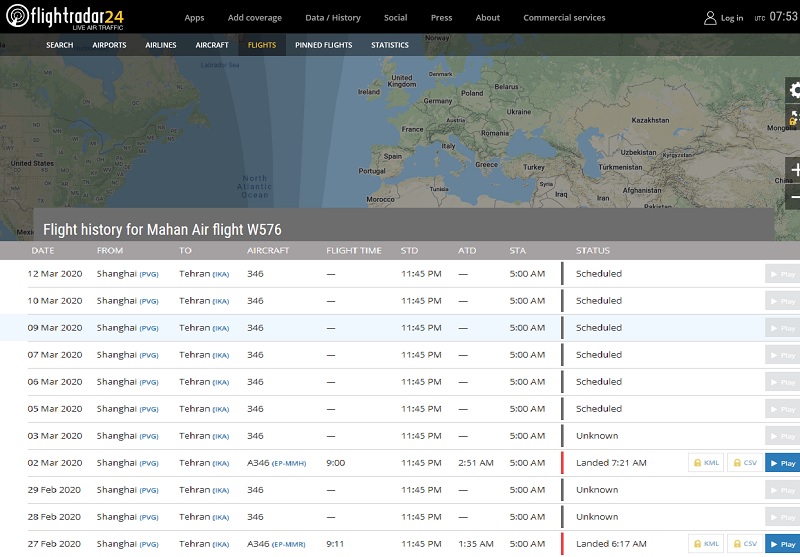 On February 28, authorities of the Queensland state in Australia said that a 63–year–old woman, who had recently come Iran, was diagnosed with COVID-19. In a similar development, according to the New Zealand authorities, the first person in this country who had been diagnosed with the coronavirus had come from Iran.

The Iranian regime’s state-run media outlets also wrote on March 1: “Canadian officials said last week that seven of their citizens returning from Iran had been diagnosed with the Coronavirus.”

In additions, the New York Times wrote on February 28: “Infections in neighboring countries and even some as far as Canada, Norway and New Zealand have been traced to Iran.” The Associated Press also reported: “All of Bahrain’s cases link back to Iran.”

Despite the rising death toll of the Coronavirus in Iran and regime’s inaction and cover-up, the regime’s Supreme Leader, Ali Khamenei, blatantly tried to downplay the crisis, calling it a “blessing,” while praising the regime officials’ so-called “transparency.”  He said: “This is not such a big catastrophe, and we have had bigger ones.” This is a ” passing issue” and nothing “extraordinary.” He continued: “Our officials have been informing the public since the first day with confidence, honesty, and transparency and have kept the public informed, but some other countries where the virus outbreak is more severe and epidemic are hiding the problem.” In addition, on Tuesday, Ali Rabiei, a spokesman for the regime’s president Hassan Rouhani, claimed that the Iranian regime had the most transparent approach to Corona.

In this regard, Mrs. Maryam Rajavi, the president-elect of the National Council of Resistance of Iran (NCRI), referring to Khamenei’s disgraceful comment, said: “The only thing that matters for this regime and its officials is to keep their grip on power. People’s lives, health, and resources have no value for the ruling mullahs. The Iranian people have suffered the greatest damage and losses under their rule, as a result of external war, domestic repression, poverty, unemployment, and illnesses.”

This is while the extent and the dimension of the Coronavirus outbreak in Iran has forced the regime’s officials to admit to some aspects of this crisis. For example, Masoud Pezeshkian, first deputy speaker of regime’s parliament, and former health minister admitted: “We should have quarantined Qom from day one… this disease is not a joke, the way we are dealing with it.” “Hospitals are overflowing and there is no room for more patients, and it will get worse day by day. The economy and everything will be ruined, it is no joke. What would have happened if they shut down the country for 15 days? (referring to the first outbreak in the city of Qom). If we did it the first day, it would not have spread to the entire country.” He added: “The numbers given are not real, because a number of patients have no symptoms. We find 95 people and two die, then we say 2 have died out of a 100, while it may be that only 2% of 10,000 have died,” Pezeshkian said.

Given the horrific outcome, the rising death toll and the rapid spread and transmission of the Coronavirus in Iran and to other countries, it is the international community’s duty to help the Iranian people to avoid an international crisis.

As Mrs. Maryam Rajavi has said: “The United Nations, World Health Organization, and other international human rights organizations must compel the religious fascism ruling Iran to make public all the facts and figures regarding COVID-19 and provide them to relevant international organizations in order to save the lives of the people of Iran and other countries in the region.”

People’s lives, health and safety is worthless to the clerical regime. All they care about is preserving their disgraceful rule #CoronaOutbreak #Covid_19 #Iranhttps://t.co/KTuMXv8YHL pic.twitter.com/RF43SoSDja