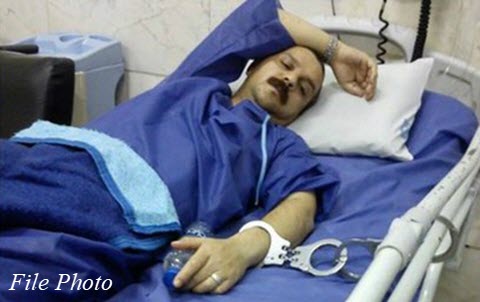 NCRI – Workers Syndicate of Tehran and Suburbs Bus Company, in a statement reported “deterioration” of Reza Shahabi’s health condition due to “complications of hunger strike.” Mr. Shahabi is a member of the board of directors of this guild organization.

According to the statement of the Workers Syndicate of the Tehran and Suburbs Bus Company, Reza Shahabi’s family said after a meeting with him in the Rajaei Shahr (Gohardasht) prison in Karaj on Wednesday, August 10, that the activist had a severe weakness and his left hand lost feeling and was numb.

Reza Shahabi struck a hunger strike 23 days ago in protest at his re-arrest. After returning to prison, following the pressures by the regime’s judiciary and prosecution office, he found that his medical leave, which was approved by legal physician of forensics, was not accepted by the prosecutor’s office and was considered as “absence” and he has to stay in prison for another 968 days.
However, according to the Syndicate of Workers, Mr. Shahabi had already seen in prison the letter regarding the end of his prison term in 2015.

The Workers Syndicate of Tehran and Suburbs Bus Company expressed deep concern about the deterioration of Reza Shahabi health condition and wrote in the statement that the “Responsibility for the situation” is on the shoulder of “judicial and security officials” and called for the immediate and unconditional release of this labour activist as well as abolition of prison sentences for Ebrahim Madadi and Davoud Razavi, other members of the board of directors of the syndicate, and other labour activists and teachers.

Meanwhile, the labour organization reported that the number of people who signed the petition for the release of Mr. Shahabi has passed 1,400.

The petition reads: “The only crime of Reza Shahabi and other members of the Syndicate was to establish an organization that is independent of the government and employer to meet the workers’ legitimate demands. For this reason, they have been expelled, arrested and even beaten.”