Iran Regime Ignores the Demands of the Pensioners 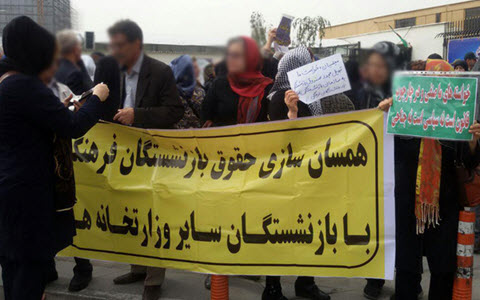 NCRI – The Coordinating Council of Iranian Educational Organizations referred to the rough treatment of Iranian authorities towards the retirees, announcing that the retirees did not achieve favorable results through constant negotiations with government and Parliament. The authorities have only given them nothing but false promises.

The Coordinating Council on Tuesday, August 29 released a statement in support of the retirees, stating that they have no other choice rather than protesting against their situation so that their demands to be fulfilled. This Council also regretted to announce that the authorities did not treat the retired people quite well especially by giving them false promises although the retirees spend their life on raising awareness and training people in the society.

The statement also reads, “The pensioners have been persuing their rights through various means such as consultation, signing petitions, and rallies for many years. They expect a quiet life without any preoccupation as well as the most basic rights any citizen shall have.”

The Coordinating Council in the statement raised demands concerning the increase of salary and receivables of the pensioners. The reports indicate that the retirees are more dissatisfied with their welfare and livelihood conditions in recent years.

Meanwhile, the government officials have been giving false promises to increase the pensions. On August 22, hundreds of Educational retirees and other government organizations staged protest in front of the Parliament of Iran. The protesters called for the law enforcement on the equality and promotion of insurance services.

The protesters were holding placards on which was written, “The poverty line is 4 million Tomans ($1200) , our Salary is 1 million Tomans ($300)”, “Fighting against corruption and embezzlement, legal security, and welfare of retirees” , “We will keep on demanding as long as we are below the poverty line, until the realization of our rights”.

The protester also chanted slogans of “Never seen the nation to bear this much of injustice”, “The imprisoned teacher shall be released, Esmail Abdi shall be released.” It is noteworthy that Esmail Abdi was the member of the board of Teacher’s Association who was charged with endangering security. He is currently serving time in prison.

Previous articleRisky Business With Iran Regime
Next articleIRAN: More Than 20 Political Prisoners in Grave Danger in Gohardasht Prison After More Than 30 Days of Hunger Strike