Iran Regime’s Chief Justice to Rouhani: Who Do You Think You Are to Break the Home Arrests? 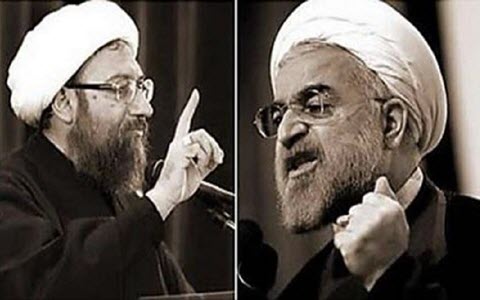 NCRI – Iranian regime’s chief justice, considered current regime’s president, Rouhani’s speech over 2009 sham election candidates’ home arrests, “against the regime’s national security” and said: Who do you think you are to stop these home arrest?”

Before, certain judiciary officials had declared that in June 2010 it was the National Security Council who decided to put under home arrest Mir-Hussein Mousavi, Mehdi Karrobi and Zahra Rahnavard.

According to the official news agency ISNA, Amoli Larijani, while emphasizing that “the nature of this work is the same as was done during 2009 conspiracy (uprising)”, added: “I’ve heard that one candidate told his supporters in one of their gatherings that we’ve come to end the home arrest. Who are you to do such a thing?”

During one of his electoral campaign’s speeches in Kerman, Rouhani, the regime’s president, promised that he would follow-up ”resolutely ” the demand to end Mousavi and karoubi’s home arrest.
On 26 Mai, Rouhani government’s speaker, Muhammed Bagher Nobakht, said that the government will certainly negotiate ending the home arrest of Mehdi Karobi, Mir Hussain Mousavi and Zahra Rahnavard.
Ending Mousavi, Karoubi and Zahra Rahnavard’s home arrest was among Rouhani’s 2013 campaign promises that he never managed to fulfill.

Underlining that the “regime’s highest security institution” has taken the “decision” in that regard, the Chief of Justice added: “Ending the home arrest needs, as other National Security high Council’s approvals, a legitimizing process and if they are trying to fuel people’s emotions and to use it as a barrier in front of legal decisions, this is the very spirit of 2009 conspiracy.”
By warning those “media and individuals” he claimed are “in a coherent and concordant action repeating such issues and putting pressure through them” he said: “We warn them to wrap up the whole issue before the Judiciary firmly does it.”

In another part of his speech, Larijani mentioned efforts to create “populist movements” in order to obstruct “legal decisions made by legal institutions”, and said: “there have been reports from their think-tanks over their intention to continue and implement their plans while the atmosphere remained “hot” due to electoral inflammations. I deduce conspiracy from this.

Previous articleIran: Female Political Prisoner Writes a Letter to Mark the End of Her 54-Day Hunger Strike
Next articleIran Regime Paying Billions of Dollars to Militias in Syria