Iran: Female Political Prisoner Writes a Letter to Mark the End of Her 54-Day Hunger Strike 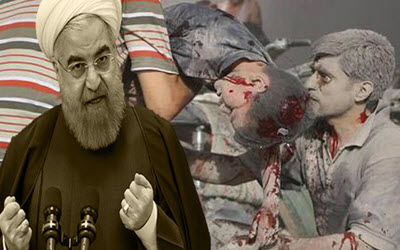 NCRI – Atena Daemi, the political activist held in Evin Prison, has ended her 54-day hunger strike after her demands were met.

To mark the event, Ms. Daemi has written an open letter to the public, addressing the reasons why she decided to go on hunger strike and what she went through during the time. In her letter, Atena has also appreciated everyone who supported her during her 54-day hunger strike.

Parts of Atena Daemi’s letter marking the end of her hunger strike are as follows:

They first persecuted my father, and then opened a new case against my sisters and sentenced them to jail, an unfair sentence which was even against their own laws, yet issued only for persecuting me and forcing me into silence.

I had warned the officials that I’d protest against taking family of a political prisoner hostage, and that I would not fear death along the way as death would be my last frontier!

I wanted to be the voice of all those who during all these years have been suffering from oppression and injustice. My sisters were an excuse so I could be the voice of Maryam and Reza Akbari Monfared, whose brothers and sisters were executed by firing squad 39 years ago and now they’re jailed for their justice-seeking.

After eight years in prison while denied even a single day of furlough, Maryam (Akbari Monfared) has been recently summoned by security officials and threatened with even more jail term; sounds as if her three teenage daughters have not had enough living under the shadow of their mother’s 15 years of unfair imprisonment!

I wanted to be the voice of Fatemeh Mosana, who was imprisoned when she was only 13 while her three brothers were executed by firing squad, and now she and her husband Hassan Sadeghi have received a 15-year prison sentence.

I wanted to be the voice of Fariba Kamalabadi and Mahvash Shahriari, who have been in prison for the past ten years and couldn’t even make it to their children’s wedding parties.

I wanted to be the voice of Azita Rafizadeh and Payman Kushkbaghi, whose 7-year-old son ‘Bashir’ is wandering between Evin and Rajayeeshahr, recording his childhood memories in prison!

I wanted to be the voice of the artists Mehdi and Hossein, who are brotherly serving their prison term, yet they would definitely be free today with their voice being heard everywhere in the world only if they chose to be puppet, regime-serving artists!

The voice of Behnoud Ramezani’s parents who asked why their son was killed, and were imprisoned afterwards.

I wanted to be the voice of Masoumeh Behkish who asked why her six brothers and sisters were executed by firing squad and where their burial place were, but was responded with a heavy jail term, or the voice of Zaynali family, who asked where their Saeid was held, only to be detained afterwards.

I wanted to be the voice of our mother Shahnaz, who said “you killed my son! And now instead of punishing those responsible for my son’s murder, I’m asking for release of political prisoners”, but she herself became one of them.

I wanted to be the voice of all and every one of Kurd prisoners who bravely chose to be tortured, make forced confessions and sent to the gallows so as to preserve their families’ honor and keep them away from evil thoughts and security threats.

I wanted to be the voice of Maryam Alangi, whose imprisoned husband Mohsen Dokmechi was neglected to death, and now she herself is imprisoned for caring for her late husband.

I wanted to be the voice of all those who due to lack of security were forced to leave their homeland after their release.

With all my heart, I wanted to be the sound of breaking the tombstone of Shahin Najafi’s mother, to say that not only we the critics, dissidents, and political prisoners are living in insecurity, but members of our families are also subject to detention and imprisonment in addition to being threatened, insulted and having to go through the pressures caused by their loved one’s harassments.

I was on hunger strike for 54 days, during which the officials’ indifference towards my situation was an additional pressure on my family. But they bravely stood by my side and became my voice with an unparalleled resistance. They kept supporting me despite being threatened by the Intelligence Ministry. I kiss my father’s exhausted feet and my mother’s hands with which she was motherly writing to me. I kiss my sisters’ teary eyes who didn’t want to see me getting hurt because of them. But actually they were the ones who because of me were targeted by the insatiable hunters. I thank my sisters for staying by my side.

Yes, I wanted to be the voice of the voiceless. Nonetheless, it was in the heat of the election and I was crushing under the propaganda. But thanks to you honorable people who were my voice and stood by me and my family, you the dearest ones whom I don’t know and perhaps will never get to know, and you pure friends and comrades who have always been by my side, I could finally make it after 54 days, which wouldn’t have happened otherwise. I definitely should name and appreciate many others, but I can’t due to security reasons!

54 days are gone, and this is not me who won, but actually it’s you, with your widespread support, your writings, your shouts, your poems, songs, and paintings. You made the victory happen using every possible means, which is sweet for us all. I also thank all the human rights organizations.

Along with you, I succeeded to achieve my sisters’ acquittal after 54 days on hunger strike, and this is only the beginning. The beginning of standing against persecution of the families of political prisoners and of those executed.

In the hope of freedom

Previous articleIran Will Not Change With Rouhani – Daily Caller Oped
Next articleIran Regime’s Chief Justice to Rouhani: Who Do You Think You Are to Break the Home Arrests?