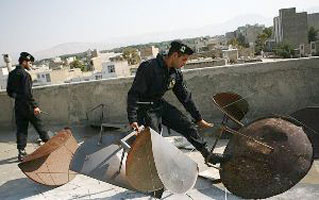 NCRI – A protest erupted in Tehran after Iranian police began removing satellite dishes from the roofs of homes and hurling them into the street below.

Police finally halted the removal of dishes in Iran Street in the Iranian capital on Sunday fearing the protest could spread to other areas of the city.

The police action was part of the latest crackdown on satellite TV by the regime’s rulers, who have also used teenage members of the Basij paramilitary force to remove dishes and confiscate satellite equipment in other parts of the country.

A Revolutionary Guards’ website has reported that on the occasion of anniversary of the revolution, a teenage member of Basij collected 10 satellite receivers from the homes of the residents of Ahamad Abad village, in Fars province.

Prior to this, a number of young Basij force members also confiscated equipment in the village of Khosrow Abad.

The Cultural Deputy of the Iranian Revolutionary Guards Corps said on January 29 that over 60 percent of Iranians watch satellite TV channels.

On February 8, Ali Jannati, the minister of Islamic Culture and Guidance, acknowledged that the regime’s efforts to prevent use of satellite TVs have failed.

He said: “Wherever we collected the satellite dishes from rooftops, two days later the dishes were returned. It seems that we only create business for the dish installers.”

But he warned: “The enemy is seeking to change the behavior of citizens, particularly youths, in Iran.”