Iranian Child Laborers; Driven out for Not Having a Birth Certificate 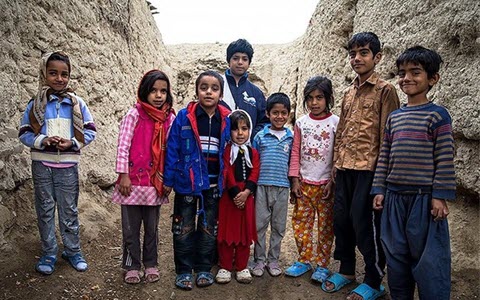 NCRI – One million and 500 thousand children live in Iran without identification, and these statistics are rising daily without a fundamental solution for it.

In the past days in Tehran province, the plan for collecting child laborers was carried out.

Iranian children have been delivered to the community emergency and immigrants have also been sent to camps to cross the border.

These decisions and actions are overlooked and lack the basics of expertise by the authorities of the Iranian regime, which can be seen in the current state of implementation of the plan for organizing street children.

Ilna’s state-run news agency, in a report about these children, has inevitably confessed to parts of this social scourge that stems from the anti-popular practices of the regime.
The report states:

The marginalized children, children without ID’s, Iranian and immigrant children, Baluchis, Afghans and Pakistanis; are driven out children; maybe the authorities think if they don’t exist or if they are collected, the capital will be beautiful and clean. A capital that apparently has no other ugliness on its face except the child laborers and those marginalized without ID’s.

No one is accountable for the situation that these children are concerned with; nobody accepts the disrupted affairs of these children; the fact that there are children who instead of enjoying childhood and education, sell horoscopes at the intersections or search the garbage and burn in the fire of poverty and homelessness. The authorities just want to collect them; that’s it.

The official report of the Public Relations Department of Shahriar Municipality tells of the implementation of a plan that collects children of work under the name of beggars.

The plan for collecting beggars in Shahriar and its villages will take away children from the crossroads and streets; send Iranian children to social emergency; and if they are addicted, addiction camps send Pakistanis to the Varamin camp and then send them straight to Mirjaveh (south east of Iran). Afghans will be taken to the border.

This is a path that begins with compulsory evictions by large vans and ends up in camps, and this does not solve any of the problems of poverty and child labor. There are, of course, banners in the streets that encourage people to not help the beggars.

We ask the municipality of Shahriar why is it sometimes violence used against those who are often children? They say: They flee from the guards, what should be done under these circumstances!
In this particular category, there is a discussion of violence against children; violence against child laborers; against children who are just children, but deprived of the right to education and just lives; the violence that targets the lowest classes of society is itself a problem that brings the community to an unknown place full of anger, grudge and despair.

Among the children driven out to the margins of Shahriar, the Baluchis and Sistanis, many of whom do not have a birth certificate, cannot prove themselves to be Iranians and have the right to study and live in this land, and the problem is right here that these children do not have any other choice but to be displaced, and every day more than the day before.

Ebrahim is one of those Baluchi children who left Shahriar yesterday despite his unwillingness and was forced to go to Semnan; his father plays the Baluchi instrument; but this way one cannot earn ends meet; his father works in a small carpenter workshop in Semnan, and lives there too, and, of course, there is no place for Ebrahim’s sleeing and living at this workshop, but Ebrahim cannot remain in Shahriar; they want to send him to a camp; he has to flee because he has no birth certificate.

Fourteen years old Ebrahim tells his story while at the bus step; his story is simple; the story of a boy who has become a man too early; Ebrahim searches the garbage; he also sells the horoscope at the intersection; he lives with his uncle; and since he does not have a birth certificate, he does not go to school.

Ebrahim Baluch talks about the guards: “I told them do not send me to camp; I am Iranian; they said to show proof that we are sure that you are Iranian; I had no evidence to show; I had to flee. I go to my Dad in Semnan, he works in a 3 by 4 (meters) place daytime and sleeps there at night; his landlord does not allow me to be there either; but I have no choice; here I cannot stay anymore.
In the Baloch and Zabul children, there is sometimes violence; they are always told to leave the place. Sometimes children under the age of 18 and non-addicts go to addiction treatment camps due to family’s lack of information.

Arrests and detentions are generally carried out without informing the families, and it is very bitter that families are looking for days for a missing child or a woman or a man and go to hospitals and police stations and camps to find out the missing members of the family.

As we saw in this report, basically, the plan to collect child laborers is a maneuver of power and violence and insecurity for this section of the society, and after a few weeks, people are usually left behind from the camp and other care centers, and after a short time they go back to the streets again.

For many years, the implementation of various projects has continued, the violence continues, and the likes of Ebrahim Baluch are many who have been deprived of all their rights.

Previous articleIran: Arrests and Imprisonment of Rights Activists in Different Cities
Next articleInternational Labor Organization (ILO): The Unemployment Situation in Iran Is at a Critical Juncture